Beyond the Fragile Geometry of Sculpture 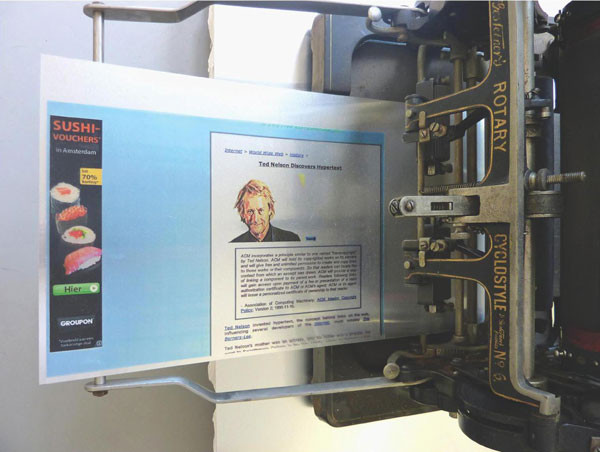 From 22 October through to 11 December, the the Foundation for Visual Arts Middelburg (Stichting Beeldende Kunst Middelburg) will present the group exhibition Beyond the Fragile Geometry of Sculpture in De Vleeshal.

In recent years sculpture seems to be more and more at the centre of a series of researches that a new generation of artists has undertaken. The exhibition Beyond the Fragile Geometry of Sculpture tries to highlight some of these views such as, for example, the relationship between image and sculpture, in which we can see how the physical dimension of the piece is contrasted with the illusionistic dimension of the image. Through sculpture, a part of the new generation of artists is confronting the physical, material, and spatial dimensions with a post-conceptual stance.

David Jablonowki
The exalted ecstasy of a technological aesthetic is put into question by David Jablonowki, who through his sculptures highlights the permanent obsolete character of technology while art seems to be heading in the opposite direction.

Astali/Peirce
This almost post-technological aesthetic, in which an aesthetic form seems to display a contemporary exposition, is present in its most existential dimension in the works by the duo Astali/Peirce, in which a polyurethane floor seems to have eliminated its icon through a strong material transformation.

Eva Berendes
Research of the elements of the past drawn from modernism are present in Eva Berendes, who is committed to the research of neo-formality. On one hand the monumentalism of geometry, on the other volumes that question the two-dimensional and three-dimensional relationship between sculpture and image.

Italo Zuffi
In the work by Italo Zuffi a tension between industrial formality and traditional sculptural research is present. A contrast between the absurd in art and the technical functionality that identifies a situation that hangs in the balance between abstraction and the reproduction of technological structure.

Guillaume Leblon
Guillaume Leblon concentrates his research in the dialectic between formalism and a dimension that leads to an evocative situation of the sculpture. His work is tied to the temporal and existential dimension of form and of time in sculpture.

Michael Dean
Michael Dean contrasts text and form, his sculptures always characterized by formal dialogue between language and form. His contribution to the exhibition Beyond the Fragile Geometry of Sculpture investigates precisely the contrast between image and sculpture with a confrontation of the contextualization of locus.
www.vleeshal.nl