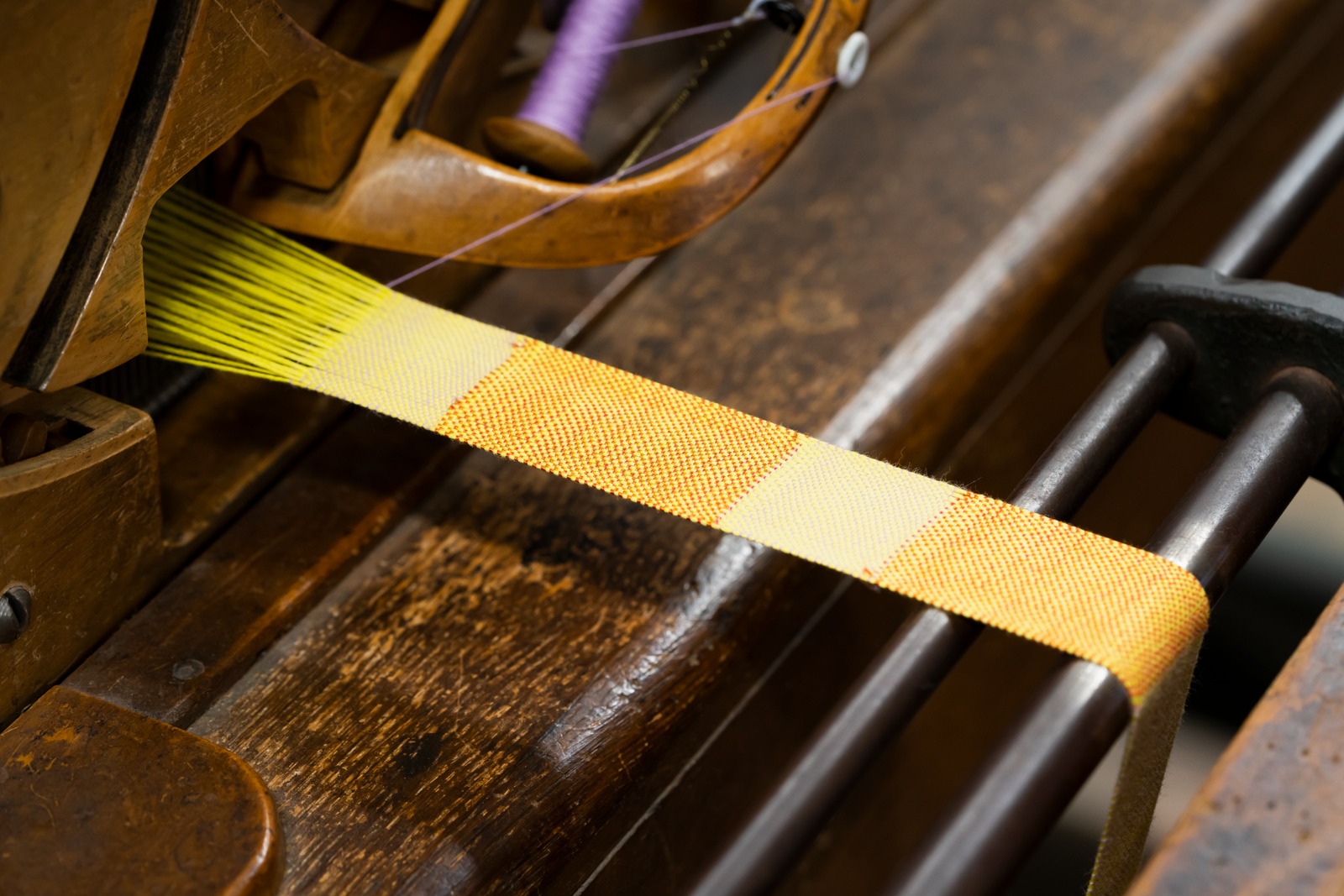 Katie Schwab, Production at TextielLab, Tilburg, 2021. Photo: Gunnar Meier, Courtesy: the artist
Ribbons, looms and 18th century Dutch darning samplers are the starting points for small wares, Katie Schwab’s exhibition at Vleeshal, guest curated by Clare Molloy. “Small wares” is the trade term for narrow textiles used for reinforcing seams and preventing fabrics from unravelling. These unassuming articles, which often remain invisible and yet lend a garment strength, are referenced in Katie Schwab’s new body of work. small wares is an examination of processes of repair in both textiles and civic architecture.

The ability to repair textiles by hand was once commonplace. In the aftermath of industrialisation this has become an increasingly rare skill. Katie Schwab’s research took her across the Netherlands to view darning samplers (stoplappen) in museum archives in Middelburg, Zutphen and Leeuwarden. Created by girls as young as 8 years old, these embroidered linen cloths document precise darning exercises and colourful repair stitches. A record of their learning, these samplers were shown to potential employers to demonstrate that these girls and women were adept in invisible mending.

The colours of the darning samplers inform the palette of small wares & hard wares (2021), woven at the TextielLab, the TextielMuseum's professional workshop in Tilburg. In collaboration with the passementerie expert Veva van der Wolf, Katie Schwab created three ribbons on a band-weaving loom from 1880. Embracing the spirit of sampling, the ribbon eschews uniformity and includes a myriad of stripes, holes and repairs in silk, cotton and linen. The vivid oranges and pinks of the ribbon’s warp make reference to madder, a plant-dye that was historically grown across the region of Zeeland—a technique that Katie Schwab explored during her spring 2021 residency at Cove Park, Scotland.

Treating the bricked walls of Vleeshal as a giant darning cloth, the ribbons dance across the walls, hanging from custom hardware hooks created by the artist and SWARF. These hooks are steel renditions of the iron bolt holes already present in the space. Through their insertion into pre-existing holes in the masonry, small wares & hard wares traces patterns of architectural scars. alcove cushions (2021) is a series of works sewn together from broadcloth and offcuts of woolen fabric known as “fents”. The cushions act as an invitation to view small wares from the unusual vantage point of sitting in the wall niches. From the curves of the vaulted ceiling strength study (2021) descends, alluding to the cloth market (lakenhal) that once traded fabric just one floor above. The textile is constructed from bias binding, a small ware that usually hems the raw edges of other fabrics. Instead of relying on stretching and framing—the traditional methods of displaying textiles—the bias binding revels in supporting itself.

Katie Schwab’s long-standing interest in post-war architecture and design led her to a particular period of repair and restoration in Vleeshal’s history. The late-gothic building was severely damaged by a fire during WWII. To support the devastated structure, a wooden scaffolding propped up the façade and the rubble was encased with wood and concrete to support a new foundation. The building’s former trauma was transformed, becoming its own source of strength. Taking this hidden history as a metaphor and guiding methodology, small wares is a subtle examination of invisible strength and repair.

The exhibition is accompanied by the small wares & hard wares edition. It consists of a custom steel hook developed for the show with SWARF and a screen printed organic tea towel featuring the exhibition’s graphic identity, as created by designer Marianne Noordzij. The edition objects function together and apart, and are ready to be used in everyday life. The edition is indicative of Katie Schwab’s approach to distributing art for domestic spaces.