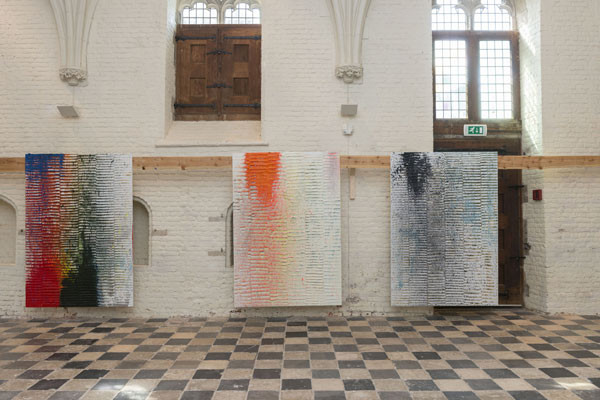 Zinging Tangerine is the overall name of the exhibition project at De Vleeshal from Friday 5 September to Sunday 2 November 2014. Koen Delaere and Jeroen Doorenweerd will turn De Vleeshal’s exhibition space into a painting laboratory that is open to the public. During the first week their working process will be presented as a performance. The results will then be displayed in a carefully constructed exhibition from 13 September onwards.

The focus is on the act of painting. The floor is covered with large sheets of plastic. There are canvases mounted on stretcher frames, lengths of linen and a great deal of paint. Repetitive actions, concentrated attention, music and cold beer. Visitors can sit on deckchairs or stroll around. At the end of the day a meal will be cooked for guests, after which various activities (some of them mentally stimulating) will be organised. The programme thus includes a yoga session, a film showing, workshops, lectures and performing acts. The stimulating climate that the two artists inhabit will have a major impact on the works and the eventual exhibition.

For Delaere and Doorenweerd this way of working, in which the additional programme of activities plays a crucial role, may be the most ideal way of showing ‘how to work as an artist’ – two artists working at the same time and in the same space, perhaps influencing or stimulating each other or making each other aware. Working simultaneously like this, alongside all the other things that are going on, will have an unpredictable impact on the working process and the result, for art cannot be seen in isolation from the social setting in which it is created. Delaere and Doorenweerd know this from personal experience, for they have already been involved in equivalent projects such as The Battle, their exhibition project at Utrecht’s Centraal Museum in 2012, and I can’t, I can, I care, a 2011 project that also took place at De Vleeshal. The fact that the artists leave things to chance and do not know what the result will be is what makes these projects so fascinating – all very much in keeping with their experimental mentality.

Jeroen Doorenweerd displays great curiosity and openness towards whatever is happening around him. He is always looking for motifs and situations that can trigger him. He maintains a broad outlook by challenging his own role as an artist. Doorenweerd seeks particular circumstances or conditions in which a degree of awareness can be achieved. Koen Delaere’s approach to painting comes within reach of the performative moment of music. As in musical productions, it is in his works that one perceives a live performance – a spontaneity that is reflected throughout a concert. There is a randomness, an improvisation and a controlled chaos. We find traces of these elements in his paintings, as well as the freshness of a live performance. His works live on an extension of the present. (*)
*From Lorenzo Benedetti’s Chromatic Explosions

In essence, Zinging Tangerine is not just an installation, but is about the visibility of a process, a particular dynamic that is taking place or has already done so. The performative aspect remains visible in the works, and the dynamic that is concentrated in the paintings continues to resonate in the exhibition space. Delaere and Doorenweerd show that art is not the result of a heroic act that has taken place somewhere in a back room, out of sight of the viewer. Instead, it is preceded by a period of contemplation, discussion and real work. Contemplating, thinking and trying things out over a given period is of vital importance and, together with factors in the artists’ surroundings, determines the end result.