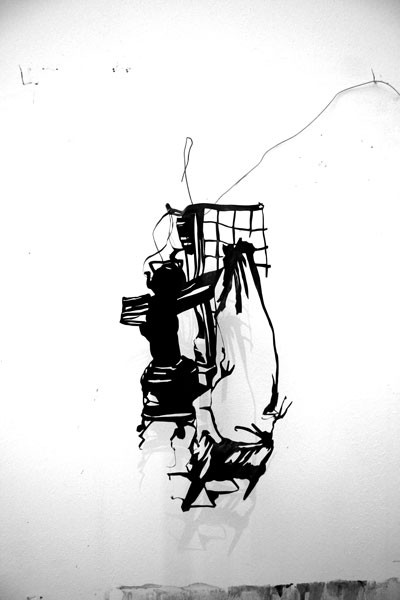 In Liesbeth Labeur’s work, words fight – the word fights – for a place, sometimes as a starting point, sometimes as an ultimate form, but always informed by the specific context of the experiential Calvinist culture. Labeur grew up in this strictly religious culture in which the word – especially the Pietistic vocabulary of the language of Canaan – predominated and strictly shaped everyday life. Within her originally biblical context the title of this exhibition, nachthutje in de komkommerhof (‘A lodge in a garden of cucumbers’), has a specific meaning; but here she also uses the visual, associative power of this phrase to reveal a different potential in language.

Taken from the Book of Isaiah (1.8), the title A lodge in a garden of cucumbers refers to a refuge from noise, a place of shelter where reflection is possible, a kind of inner chamber. At De Vleeshal, this archaic inner chamber is the starting point for a monumental installation in which the artist combines architectural features with references to a Pietistic idiom that is sometimes impenetrable to the uninitiated. Labeur’s full-size installation in the Gothic, almost church-like Vleeshal invites visitors to play with various linguistic interpretations and engage in an exchange between images and words.

This exhibition is part of the 2013 Middelburg Foundation for Visual Arts (SKBM) / De Vleeshal Art Award. The purpose of the award is to encourage the development of artists from the Middelburg region. Local artists were invited to take part in the 2013 award, and the selection committee and the curator Laurie Cluitmans selected eight artists for studio visits, after which the winner was announced. The exhibition is the result of an ongoing dialogue between Liesbeth Labeur and Laurie Cluitmans in 2014.

Liesbeth Labeur (b. 1975) studied at AKV St. Joost, and now lives and works in Middelburg. Her art focuses on Pietistic use of form and Reformation subcultures. Her Sela©projects, for instance, included an installation entitled The broad and the narrow way at De Kabinetten van De Vleeshal in 2008, the Calvijn! glossy magazine (2009) and Op weg naar Zoar, published by Prometheus and proclaimed the best Dutch graphic novel in 2011. Her work has also been seen at such venues as the Hermitage in Amsterdam, Spaceburo in Antwerp, Kipvis in Vlissingen, the Zeeuws Museum in Middelburg, the Visual Arts Centre (CBK) in Rotterdam and the Biblical Museum in Amsterdam.
www.liesbethlabeur.nl