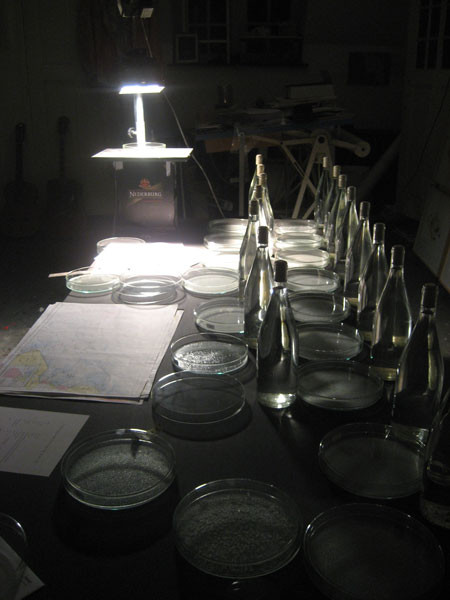 Loek Grootjans (b. 1955 in Arnemuiden) collects and keeps a record of whatever touches him as an artist and a human being. In 2008 he launched Storage for Distorted Matter, a wide-ranging project that sets out to register and store life. Thus for many years the artist collected the dust in his studio, as well as Vincent van Gogh’s native soil; he also stored the water in which drowned bodies washed ashore on the Dutch island of Vlieland. For De zaak Piet Mondriaan, part of Storage for Distorted Matter, Grootjans collected the light that Mondriaan must have seen when he first arrived in Domburg in 1908. The result is an installation at De Kabinetten van De Vleeshal, entitled Storage for Distorted Matter (Case P.M.). P.M. stands for Piet Mondriaan.

Grootjans claims that the ‘Zeeland light’ Piet Mondriaan first saw in Domburg in 1908 did much to change and shape his work. The light in the province of Zeeland is phenomenal, and according to Grootjans’ research this is due to the influence of the Western and Eastern Scheldt estuaries and the currents in the North Sea and the Straits of Dover. The salt crystals in the water are far larger in the summer than in other seasons and are cast up into the air by the swirling currents, affecting the light. The seawater is at its warmest in September, which is why the crystals are especially large at that time of the year. The way in which the light is reflected by the crystals produces a unique effect.

Grootjans spent a year collecting water from the sea at a point between Westkapelle and Domburg – the intersection with Mondriaan’s line of sight from Domburg to Westkapelle – and letting some of it evaporate. He also took thousands of photographs of the sublime Zeeland light at the same spot. His installation combines historical and contemporary elements to provide an idiosyncratic new vision of art history.

In 1908 Mondriaan first set foot in Zeeland in the province’s main town, Middelburg, and travelled on from there to Domburg by steam tram. Grootjans’ presentation of De zaak Piet Mondriaan at De Kabinetten van De Vleeshal brings Mondriaan back to Middelburg. The installation includes a wall showing all the relevant dates; seventeen edited nautical charts; fifty-two bottles of seawater accompanied by large Petri dishes with the salt crystals incorporated into large display cases; fifty-two framed documents belonging to the storekeeper of Storage for Distorted Matter; a video compilation of thousands of photographs of the sublime light in Domburg; and a work showing Mondriaan’s exact location and line of sight when he produced his painting View from the Dunes with Beach and Piers, Domburg.
www.vleeshal.nl