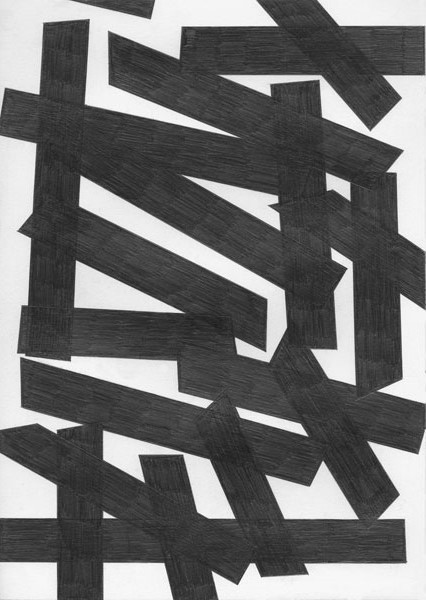 For his exhibition in De Kabinetten of De Vleeshal, Nagtzaam made a selection of mostly recent work, together with some of his older drawings. As a result, the older work can be viewed from the perspective of the new, and vice versa.

His aim is to utilize the sequence of the three spaces of De Kabinetten optimally. Nagtzaam sees the exhibition as a single work. With each new installation, the emphasis is on a different quality. The same structural approach that is used when making the drawings is also reflected in the structure of the exhibition, which can be seen as an enlarged drawing.

The visual repertoire of Marc Nagtzaam’s drawings ranges from hard-edge abstraction to the reproduction of the written word that he collects from art magazines. There is a tension that runs through Nagtzaam’s practice of drawing when the repetitive and controlled quality of the geometric drawings converge with all the imperfect and personal gestures one expects from graphite on paper embodied in drawings of the written word. The language of abstraction and the abstraction of language enter a frame-by-frame interplay, when the artist manages to render the highly impersonal, codified and essentially almost abstract language of art journalism into manifestly personal images on the one hand and submits a rather personal process of abstraction on the other.

Nagtzaam’s geometrical drawings are based on collages of images collected by the artist from magazines that caught and retained his attention long enough to be preserved. Once selected, they are organized in irregular puzzle-like grids, photocopied, and then traced over, such that only the adjoining, rectilinear contours of the images remain, effectively eroding the content of the collaged images. The unsteady grids reveal a pattern heterogeneous enough to suggest some obscure organizing principle, while the ineffably personal touch is saving the grids from being absorbed into the anonymity of the magazine’s graphic language.

On the occasion of the exhibition, a book will be presented which was published in collaboration with Roma Publications, with text by Francesco Stocchi.