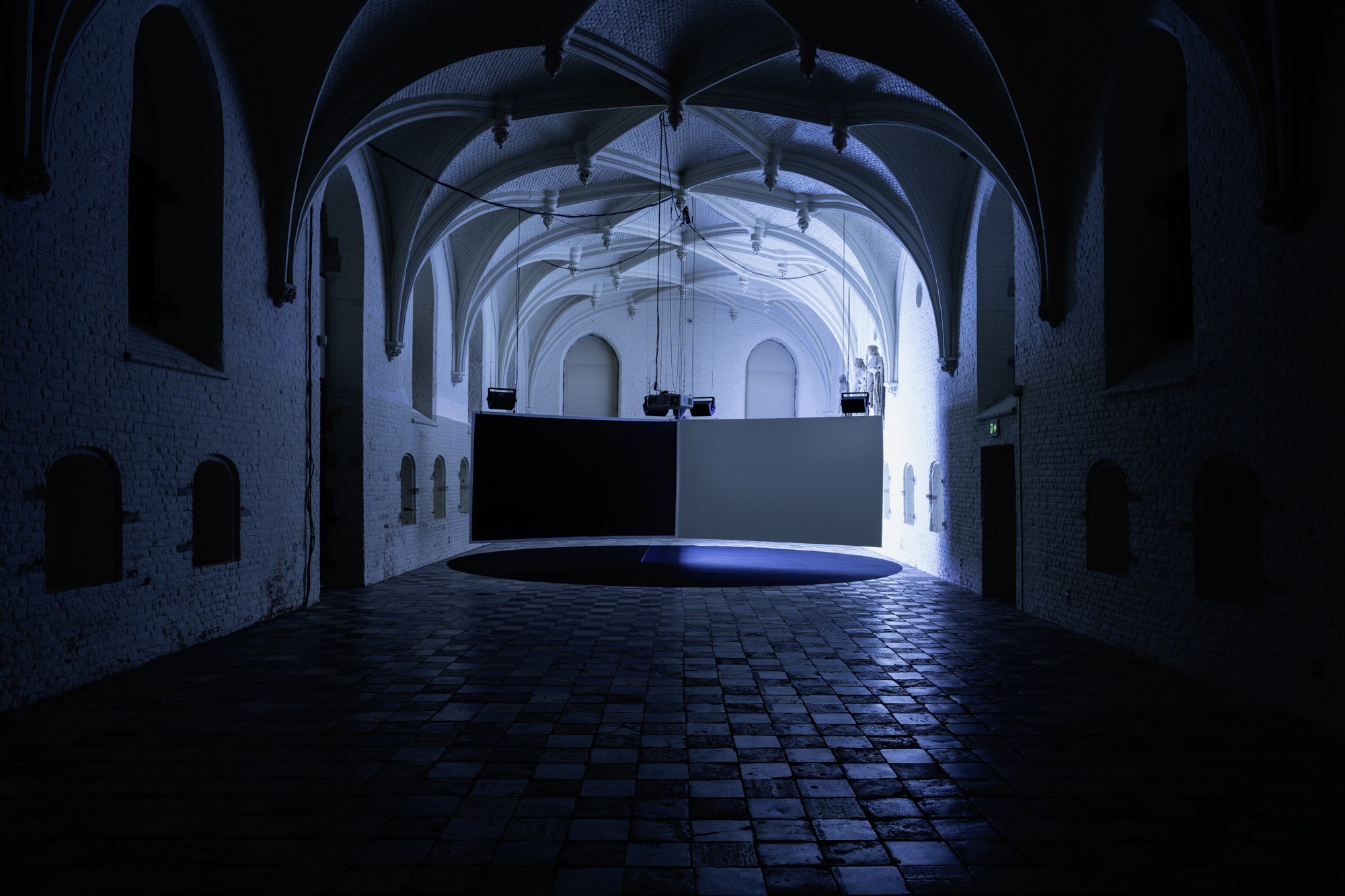 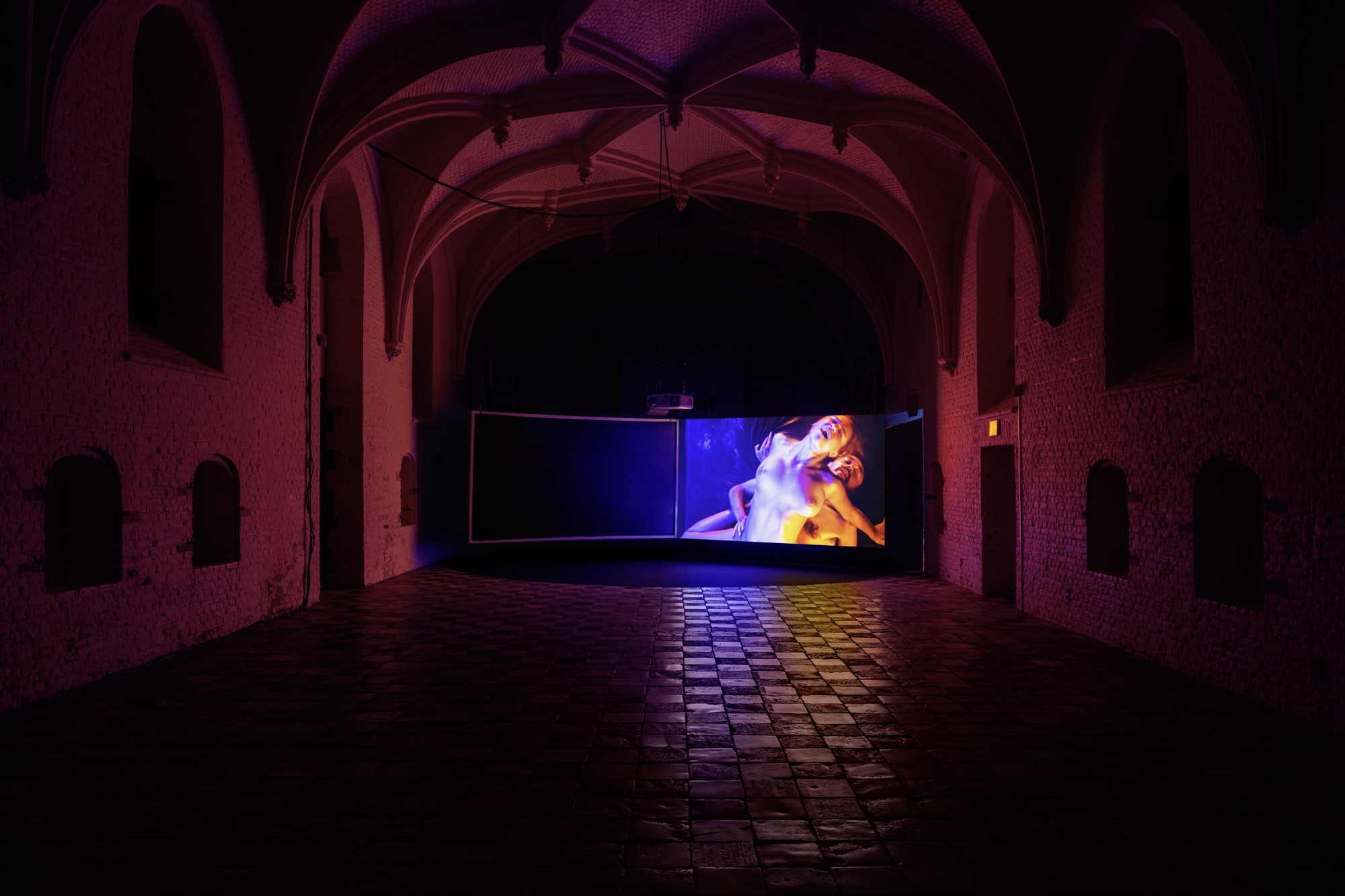 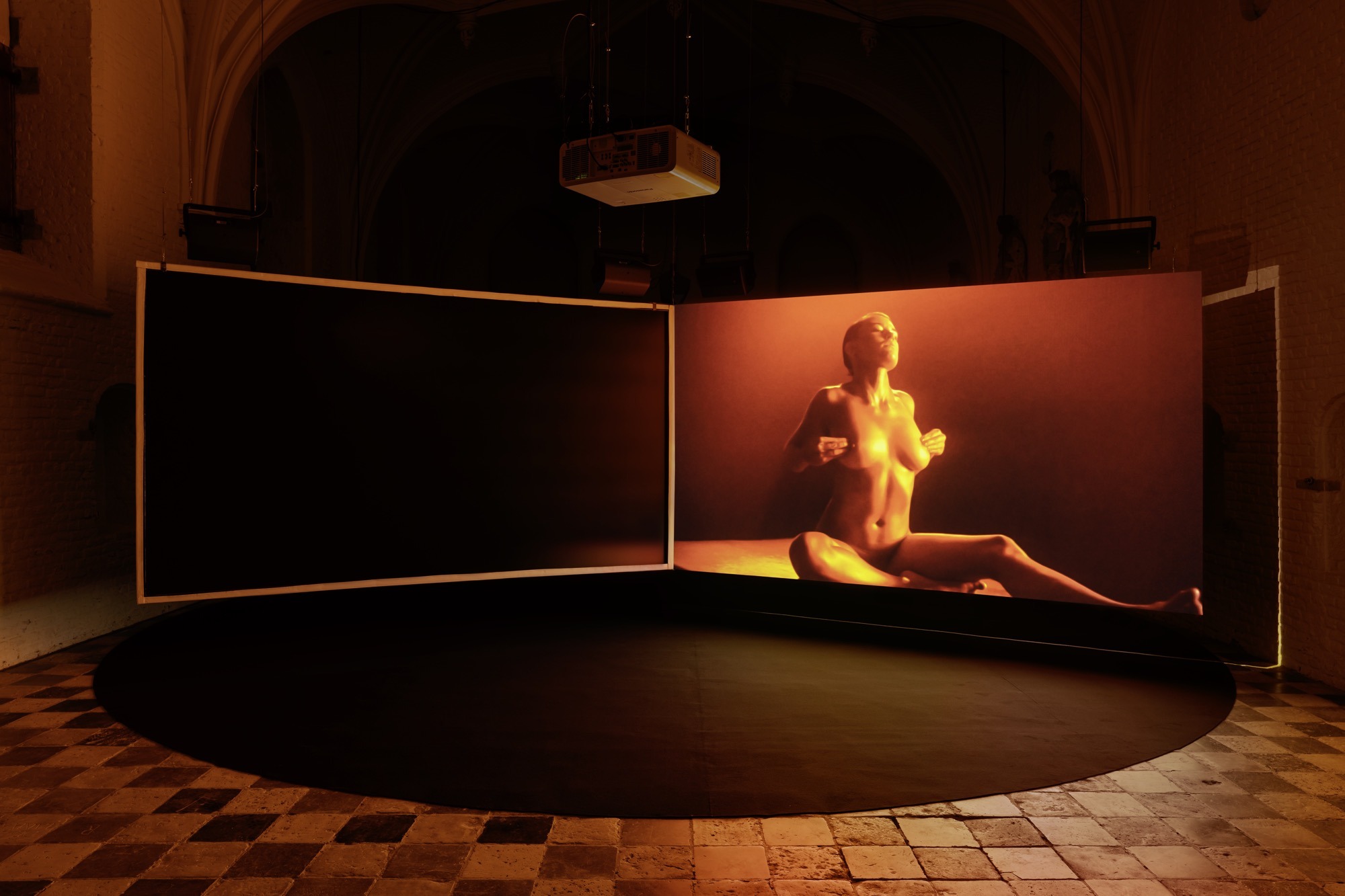 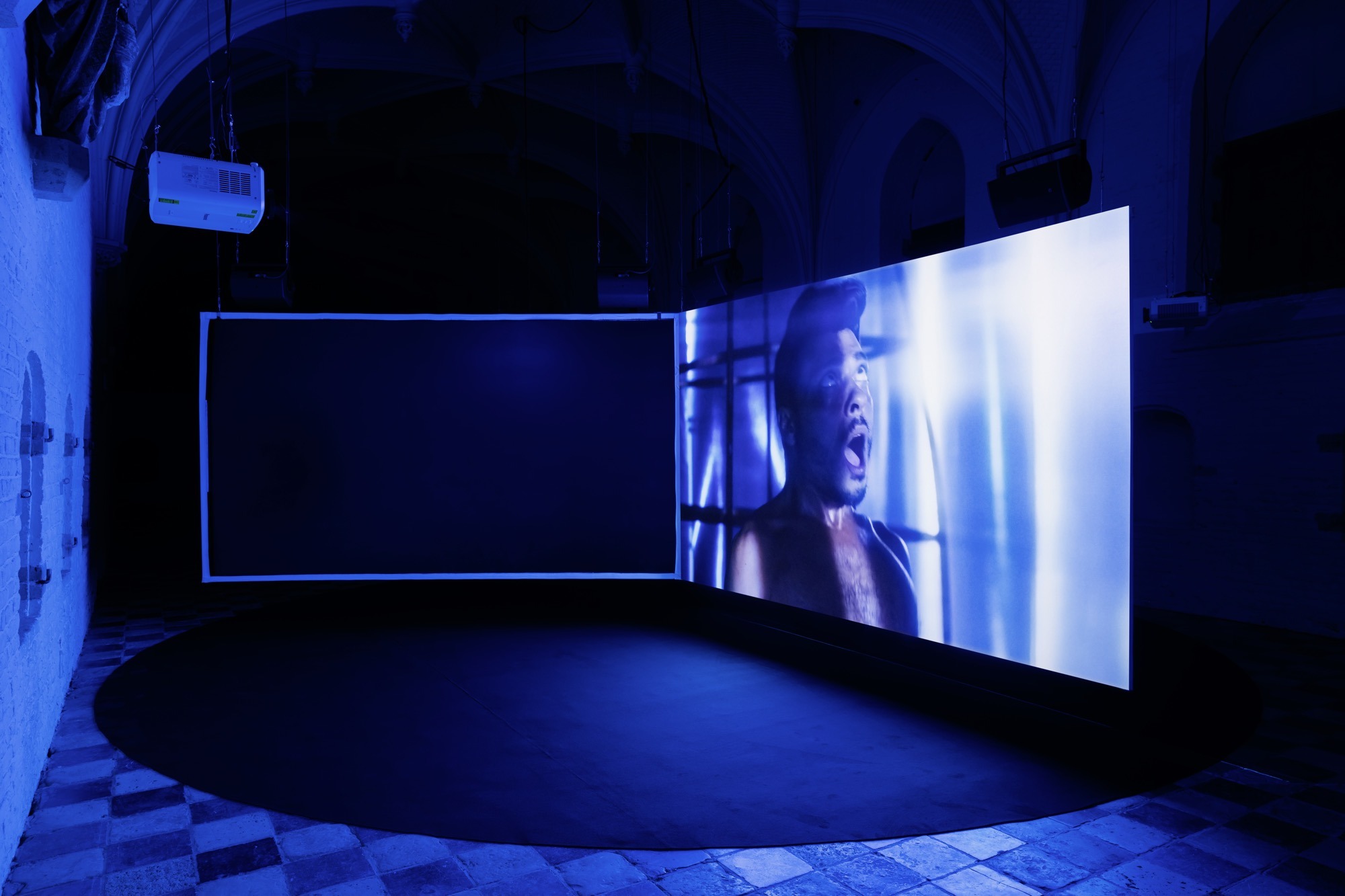 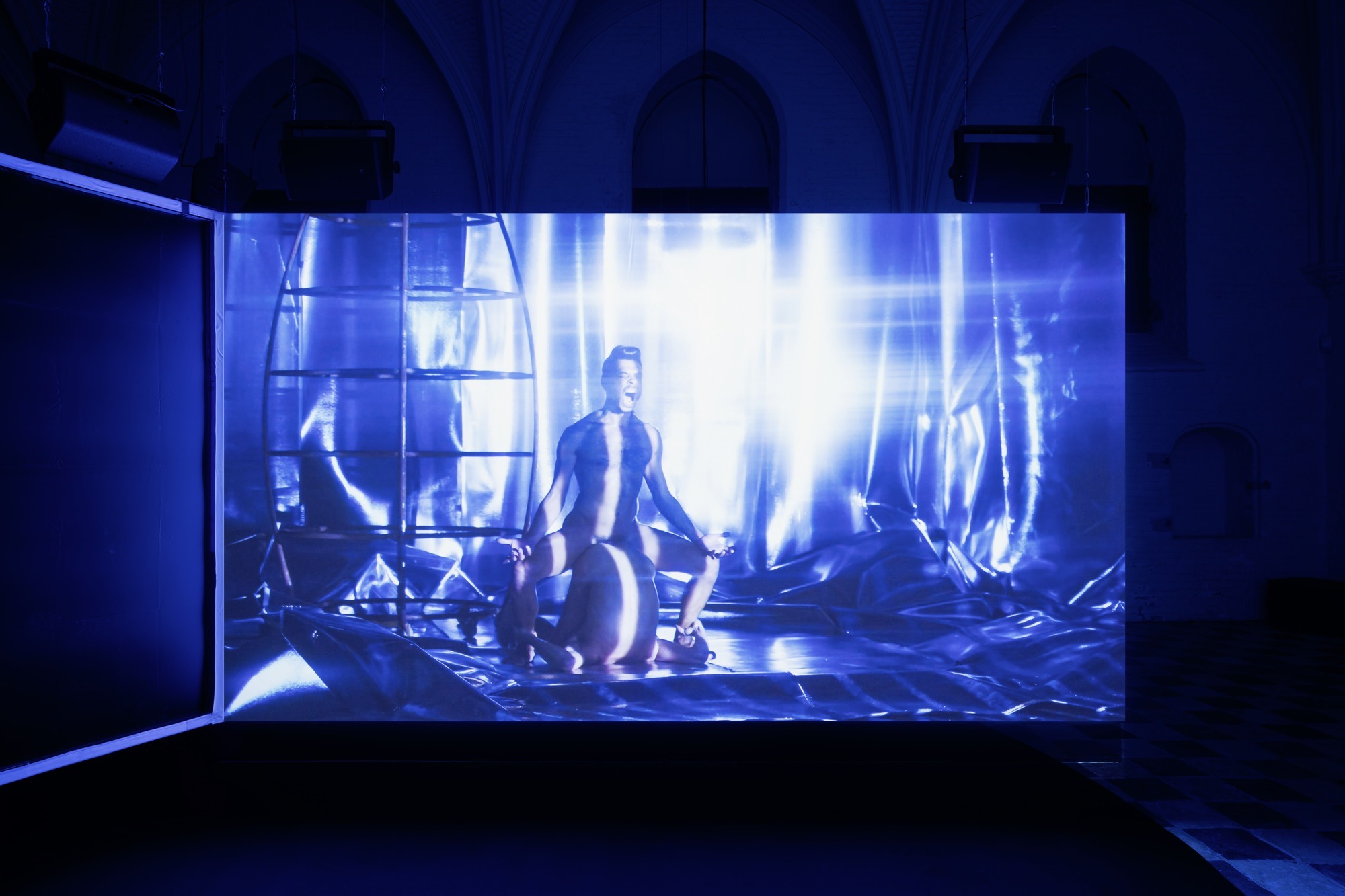 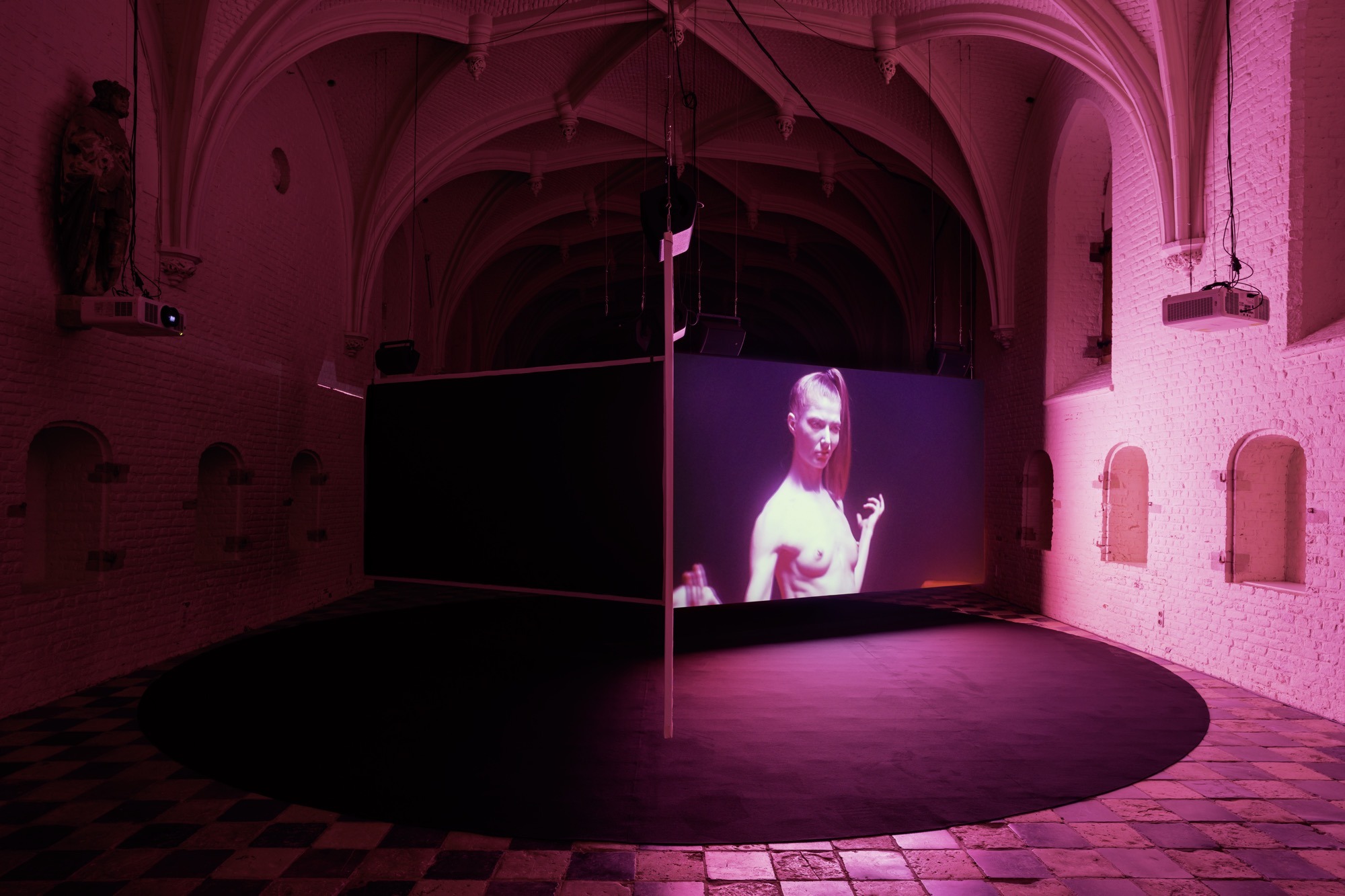 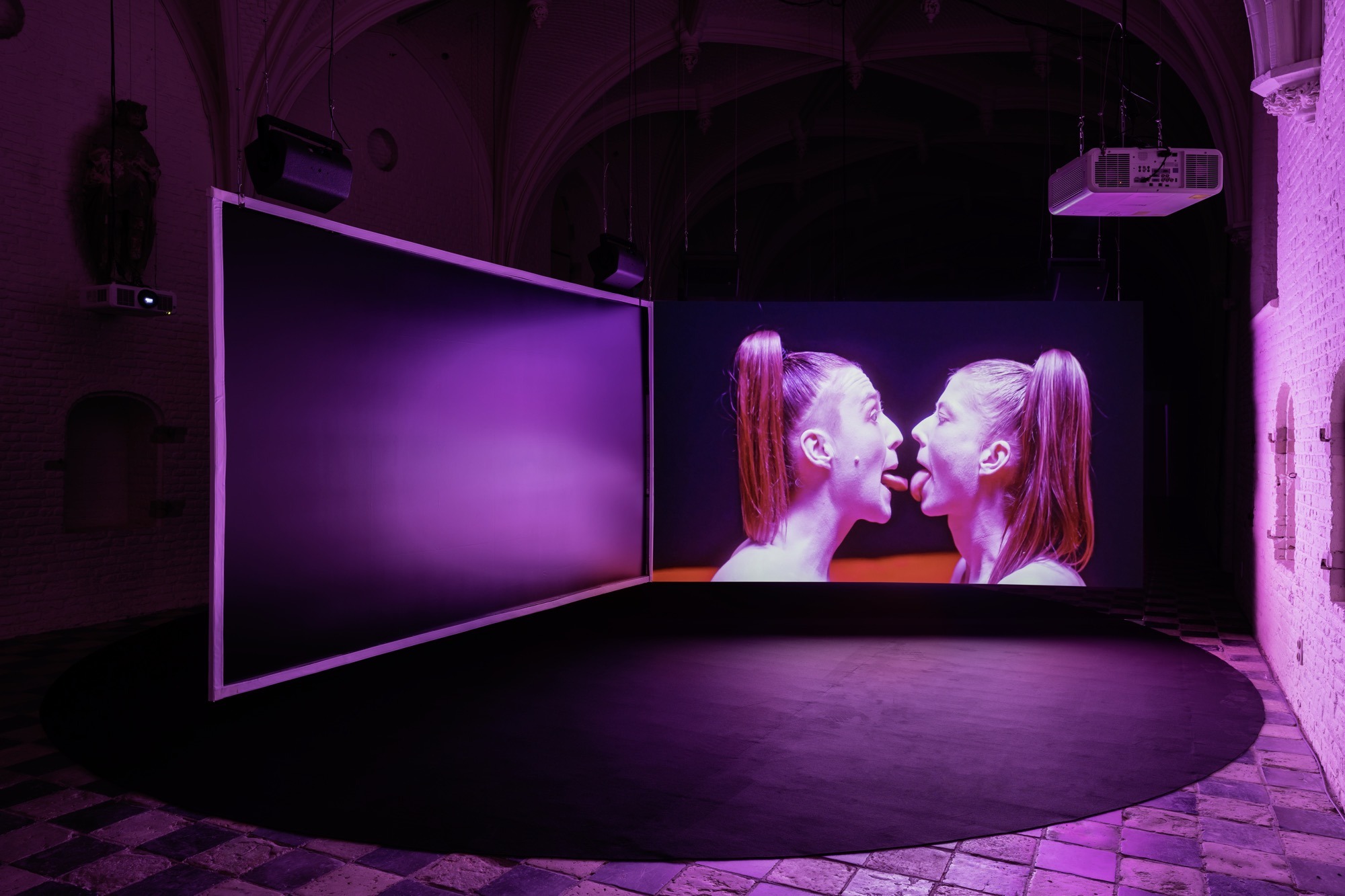 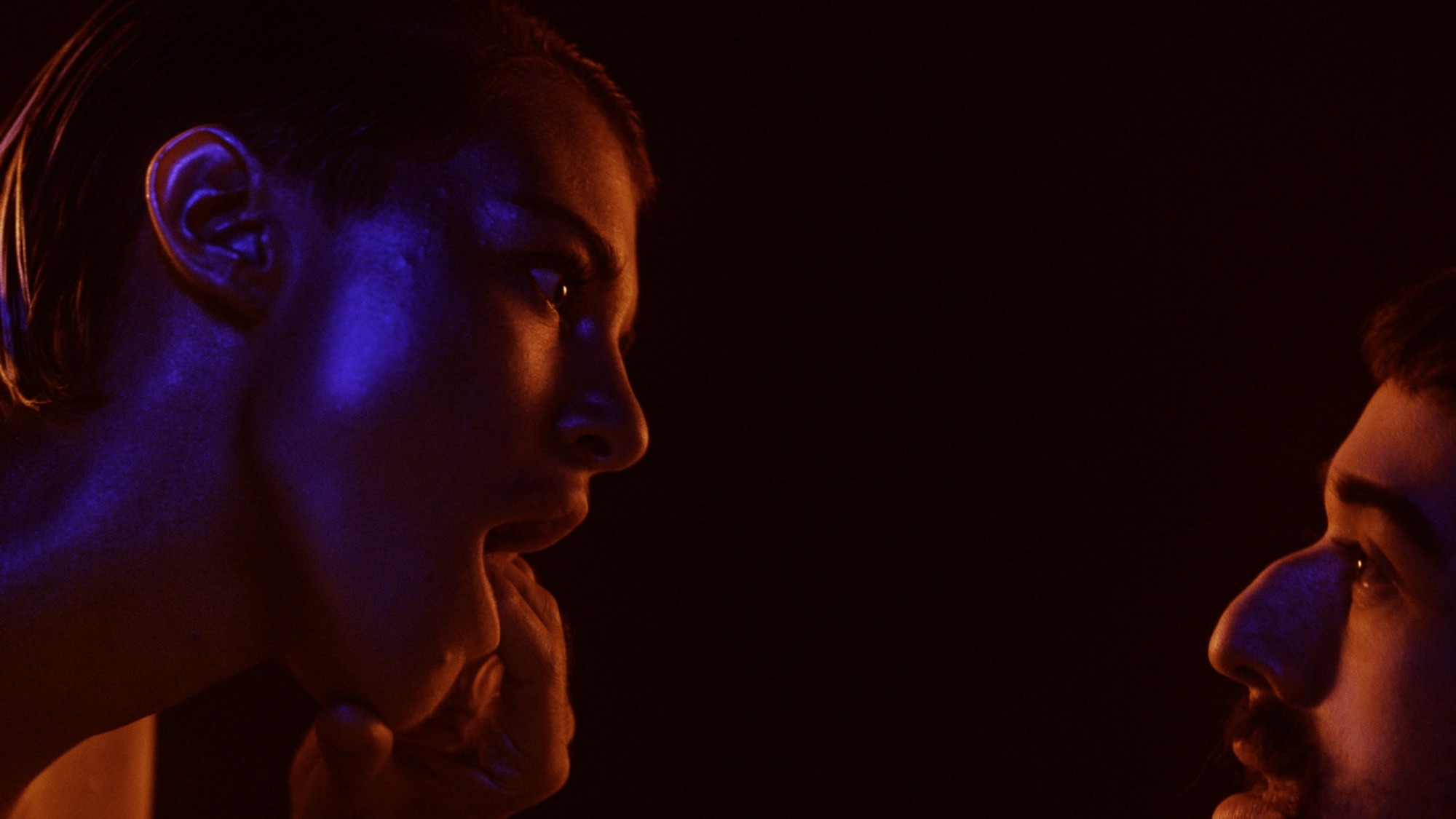 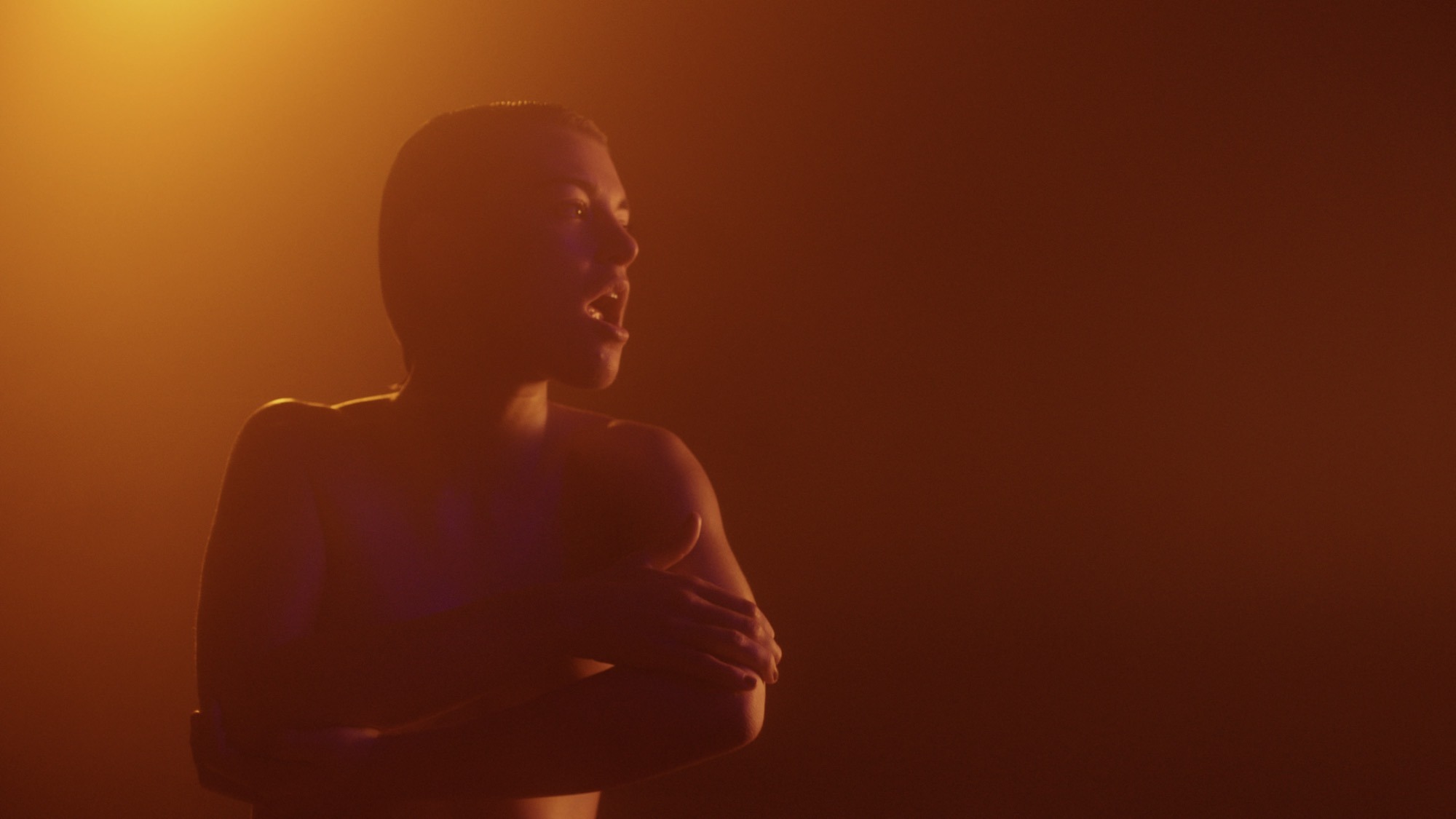 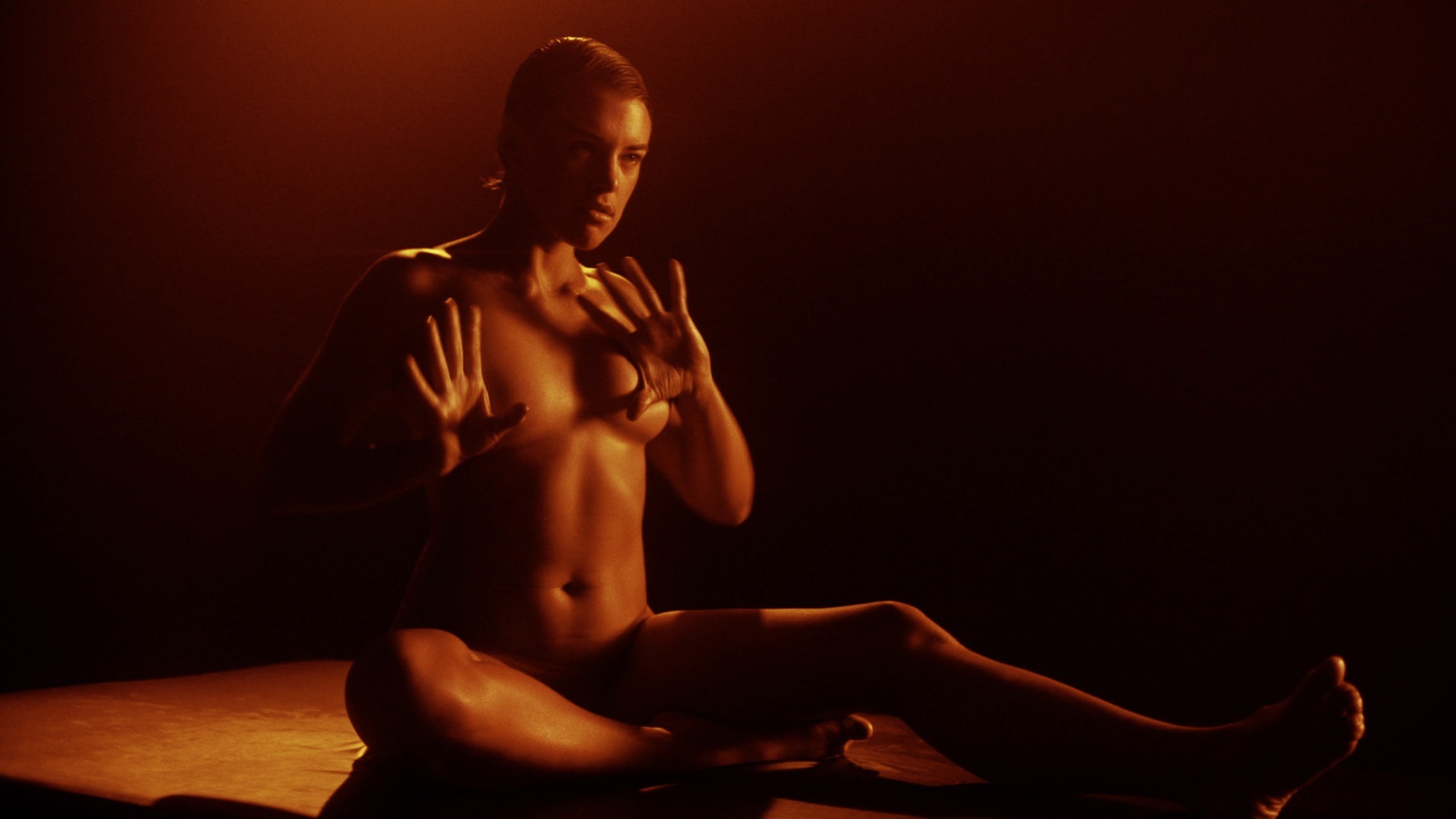 Or, Can You F*ck to an Irregular Beat?
“I have a background as comedian and I’m always searching for territories that seem humourless, and are kind of shouting out to be perverted or permutated, because I think innovation and humour share the same kind of mechanism. You’re basically taking the unknown, finding its formula, and permutating different variables until it either makes you laugh, or you have something progressive, or some new form of otherness.”(1)

From 19 January until 20 March 2020, Vleeshal presents Michael Portnoy’s new multi-channel video installation, Progressive Touch: Series 1 (2019). The goal of this work, as the artist puts it, is to “improve” the rhythm of togetherness. Exploring and expanding the relationship between human sexuality, choreography, and musical composition, he aims to combat the apparent simplification of rhythm in human movements and gestures. This can be observed in the industrialization of labor or the history of contemporary dance, where the relation to rhythm has been either severed or reduced to allusions to pop culture. This situation can also be noticed in the predictable cadences and movements of sexual intimacy, long since exploited, commercialized, sensationalized, or desensitized. Portnoy proposes complicating this all-too-predictable condition by introducing the complex meter and compositional structures found in progressive rock and math metal to the sexual act. A group of actors performs modified steps in the sexual encounter in slapstick vignettes. Together they make up a composition resembling a rock opera and also provide an example to be tried out at home.(2)

Progressive Touch: Series 1 can be read as the second chapter in Portnoy’s book of love, Progressive Touch. Since 2014, the artist has developed a choreopubopoetic therapy, which routes vocal sound through the pubic bone to reprogramme behaviour and thought at the electrorhythmic level.(3) This is behavioural therapy designed to “reprogram the corrupted source code of the white male, responsible now for the decay of progressive values around the world”(4). In 2017, Portnoy and actress Lily McMenamy reprogrammed around 45 white males, one after the other, during KW’s spring performance series The Weekends. They were bending over the naked man’s pubic area, intoning phrases in an invented language that strays, occasionally, into bathetic coherence.

Portnoy is a self-styled ‘Director of Behavior’, and is largely concerned with manipulating language and behaviour as a tool for world-bending – ‘improving’ conventions of communication and action so as to liberate people from the structural or socially-constructed limitations of physical and emotional language. In doing so, the process by which we negotiate the world and our relationships to one another is called into question.

At Vleeshal, there is the promise of being reset as well, if needed. The vibrations of the sound in the videos, resonating in the space, can be physically felt. Self-styled ‘Director of Behavior’ Michael Portnoy manages to world-bend, even when he’s absent.

Please note that, due to mature content, you must be at least eighteen years to enter the exhibition.
www.vleeshal.nl