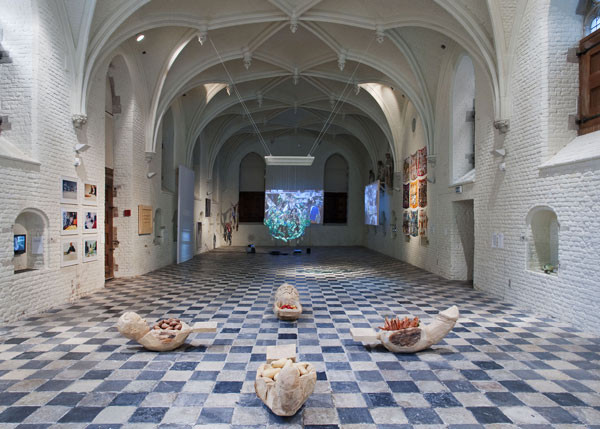 Rainer Ganahl (1961) has been fascinated by Marx for nearly two decades. This culminates in this show which he entitles Manhattan Marxism. In De Vleeshal he will show video’s, Jewelry, paintings, installations, fashion and much more. On his website manhattanmarxism.com Ganahl writes about the exhibition.

Needless to say there is a contradiction at hand since Manhattan is place of Wall street, the biggest machine of Capitalism throughout the 20th century and still one of the biggest and the most important one in the world. But this little Iceland is not only home to many high wealth individuals including some of the richest people in the world but also to many poor people and a neighbourhood still belonging statistically to the most underprivileged areas in the United States.

Hence, Manhattan in conjunction with Marxism could easily be understood as radical chic, some kind of provocation if not outright cynicism, but I do not intend it as such. Not only do I myself live in Manhattan – in the barrio of Spanish Harlem – but also do many theoreticians who read and study Marx’s texts which is still taught at Manhattan universities.

I am interested in Karl Marx as a theoretician and a metaphor for his theoretical analysis about how people interact materially and socially thus creating an economic systems that gives us work, value, profits, losses, crisis, debts and differences. He says work as a the major force for people to deal with the world, to satisfy their needs and to create and shape their mostly instrumental thinking. Work for Marx is a basic category that takes on new shapes in whatever developmental phase the individual or society finds itself. It is crucial to sustain life and create our understanding of the world and each other. I would go as far as to say that in a society where basic needs like food, clothing, health and security are nearly all guaranteed by the state without much effort, even consumption, distraction, shopping and wasting is some kind of lying just idle is work creating an overall productive effect.

Marx was also an amazing analyst of the products human and machine work produces. Already in the first part of the 19th century he speaks about the fetish character of products and good something that is the dominating and driving force of shopping and accumulating stuff and services today. His materialism explains the world from the bottom up and unlike idealists who start with big master gods, big terms and concepts and put the idea of something ahead of that something, for Marx survival comes first which then makes humans make things to become who they are and what they are.

Marx stands in large part of the left leaning population – to which I count myself – for social justice and hope. On the right leaning spectrum, he is blamed for the disasters and brutal repressions 20th century forms of communism produced with all its terror and inefficient economical systems. Even if I am fascinated by Marx’s materialist philosophy and his very influential understanding of economical and social processes of his time including his fight against idealism and any kind of god-business, I am not a Marxist the way it was understood in the 20th century where such a sentence and declaration could cost or save you your head literally or metaphorically you job and material if not also social well being depending on the time, place and people you found yourself in. Saying all this, I have to point out to all the misery, wars and murders that was committed partially under his banner, his ideology, his name – no matter how innocent the mostly London based writer was or wasn’t.