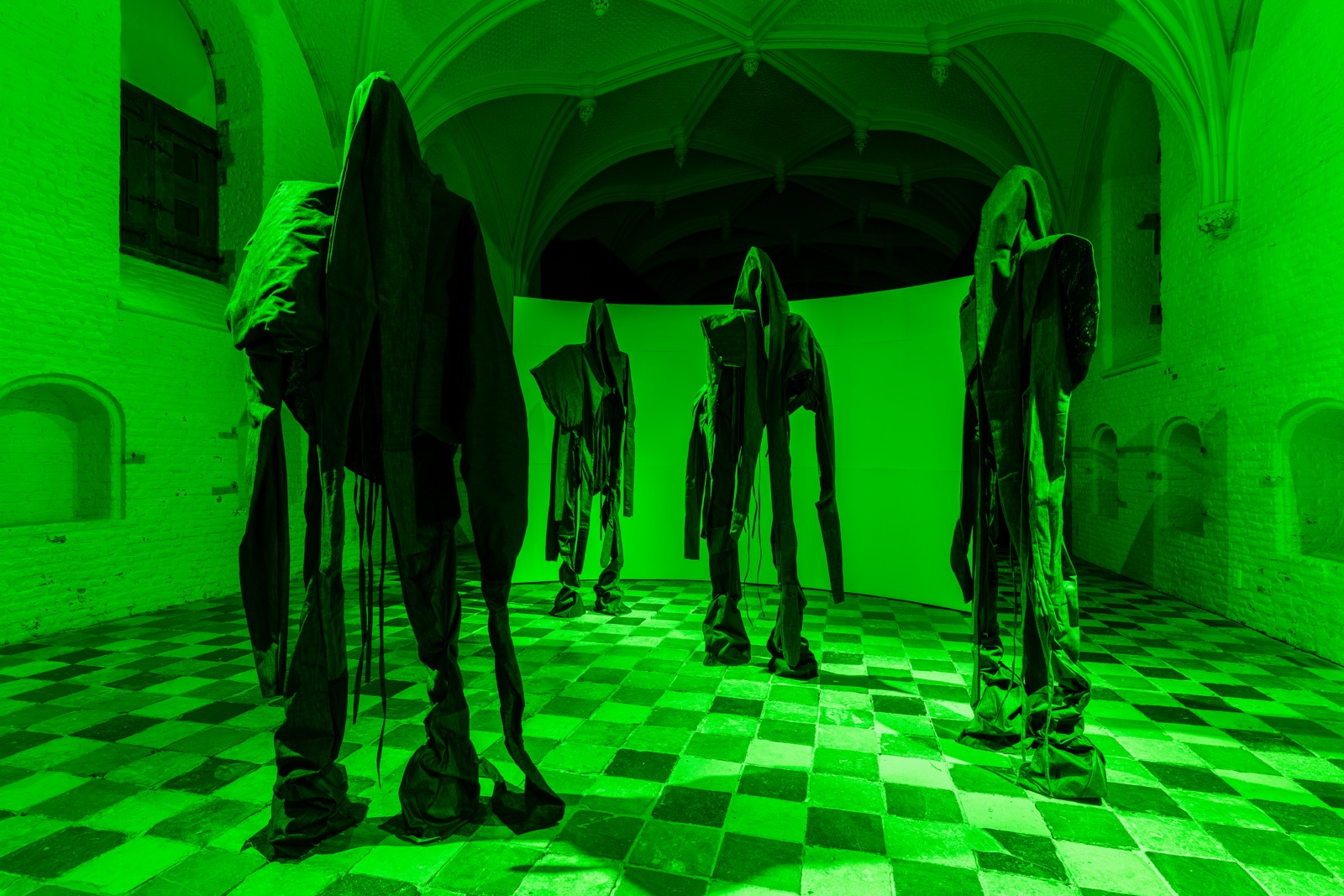 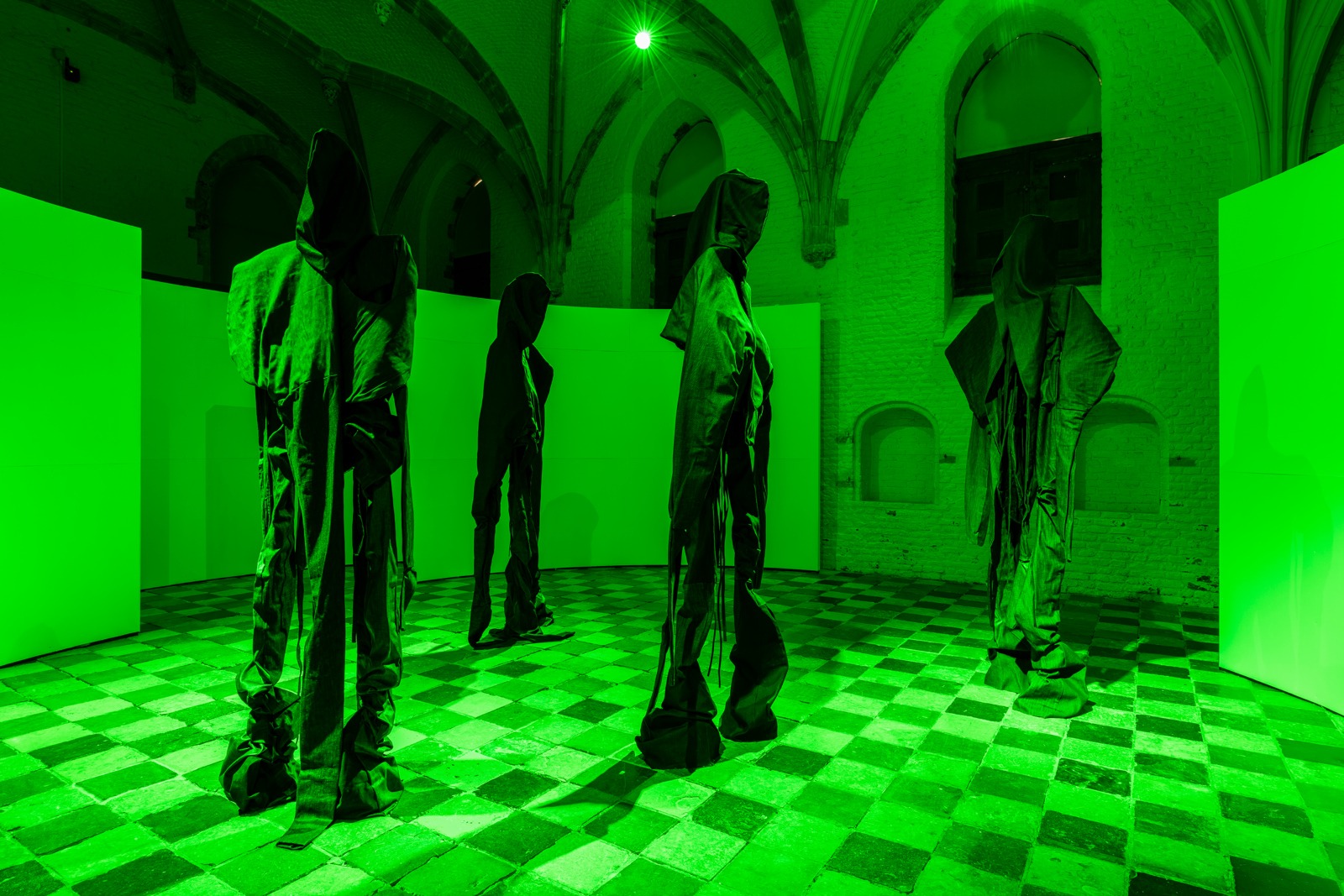 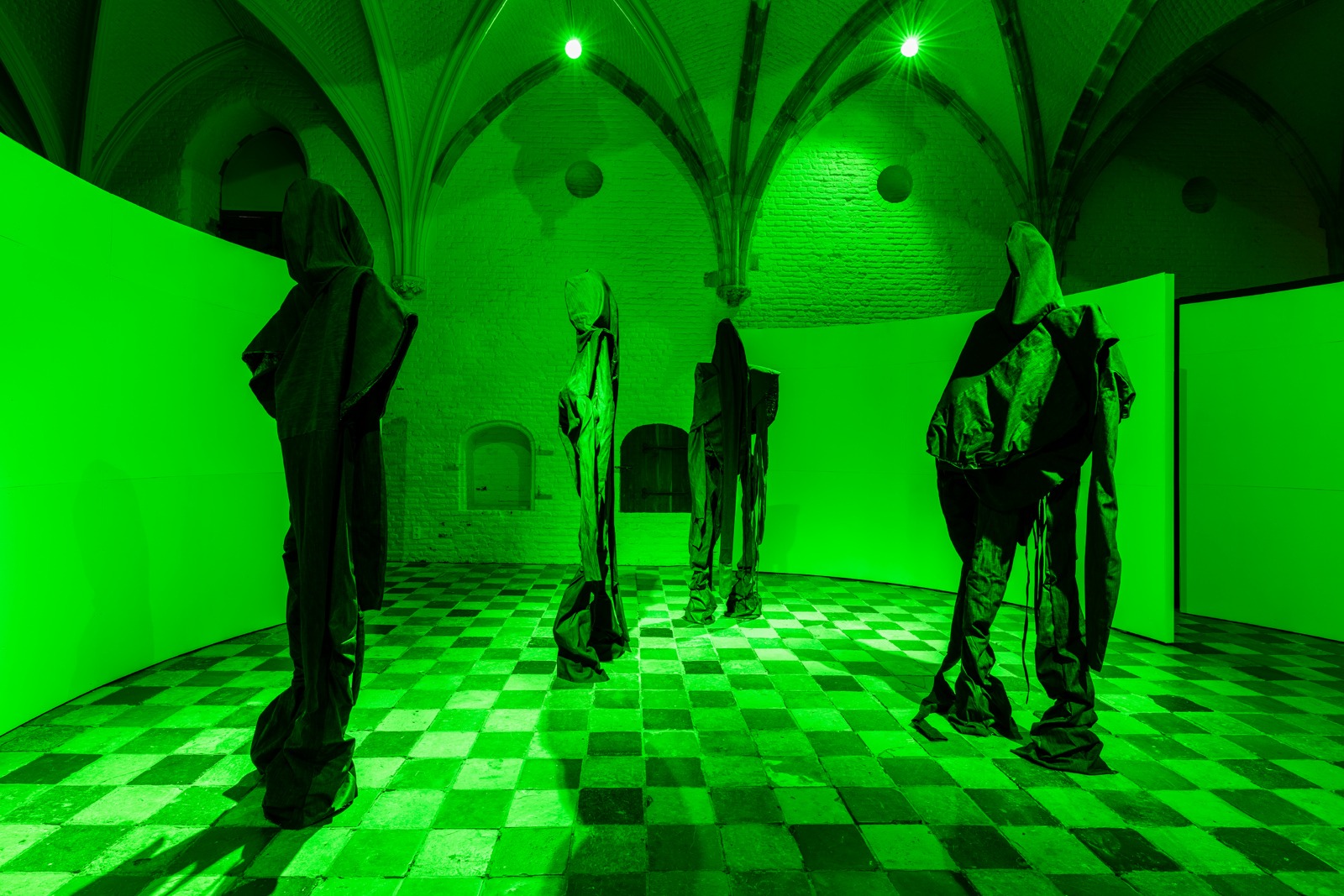 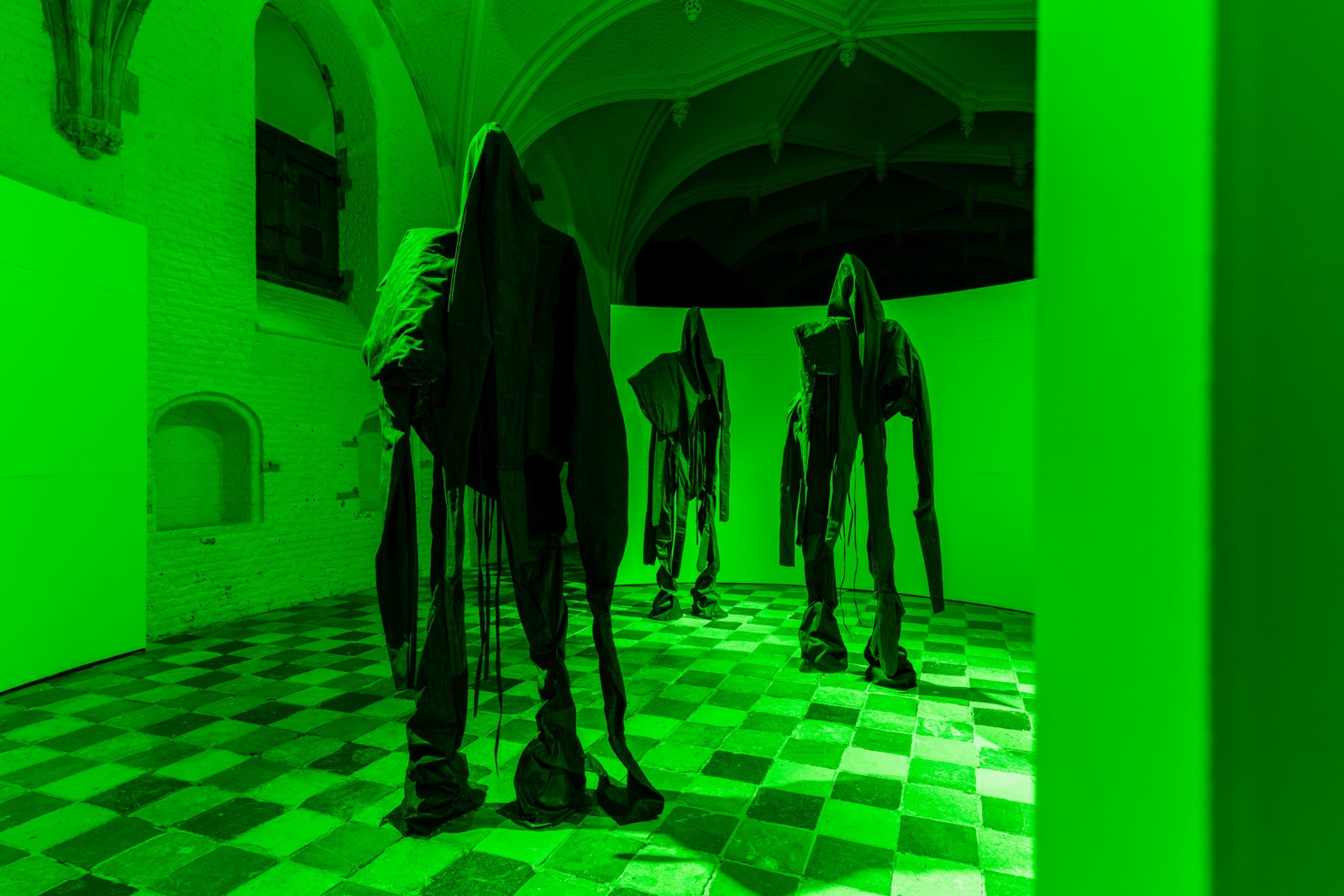 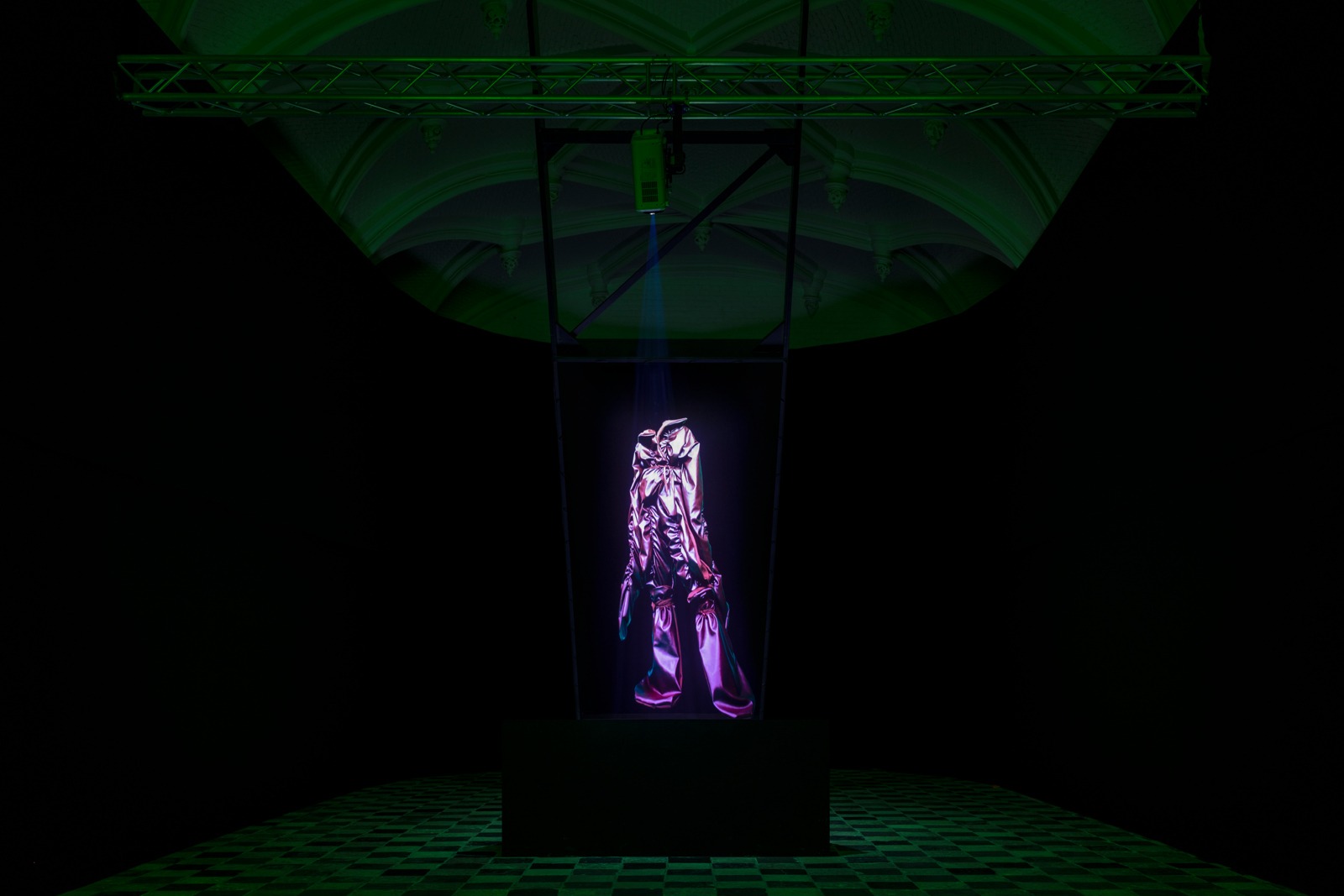 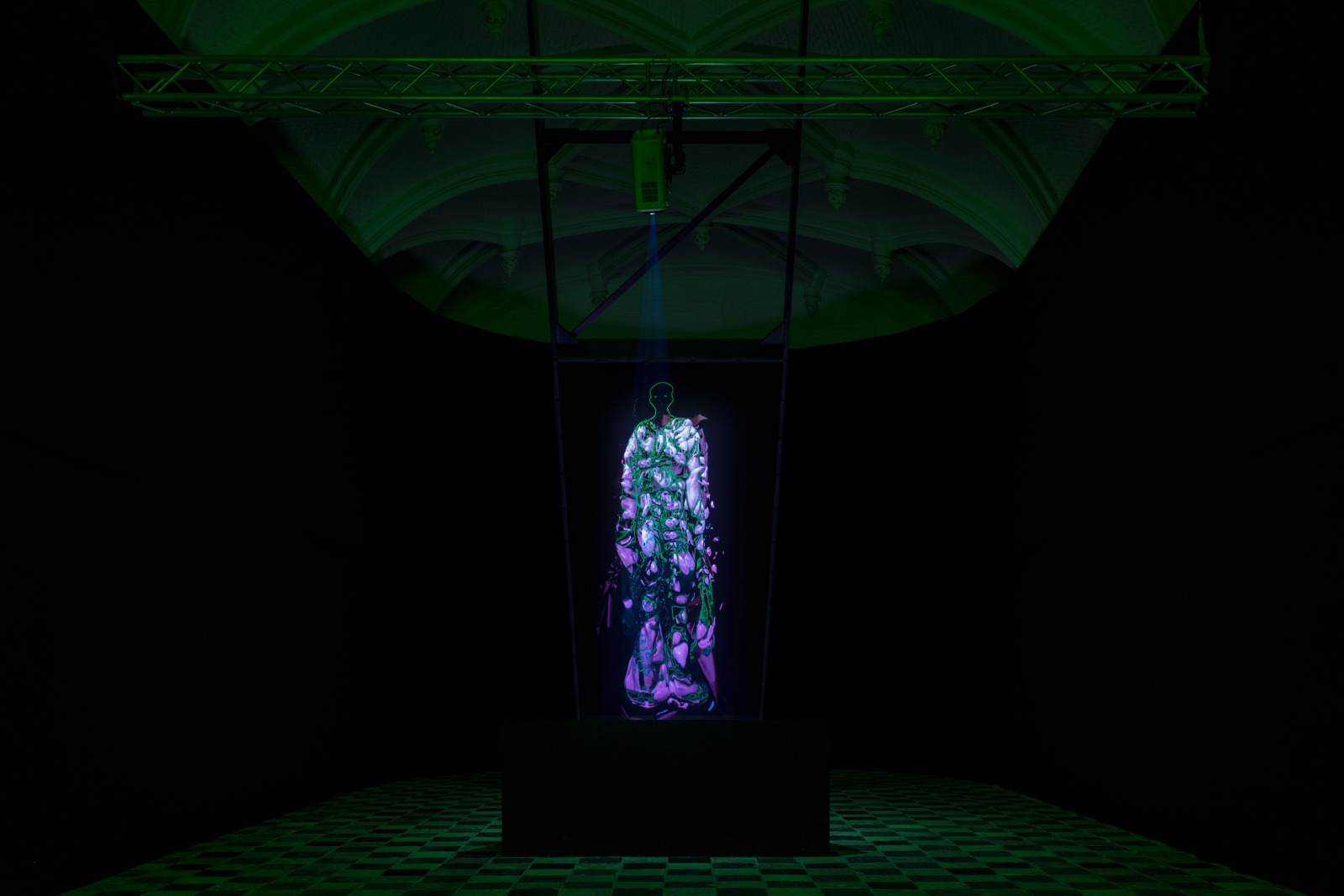 Sandra Mujinga, Midnight, exhibition view at Vleeshal, Middelburg, photo: Gunnar Meier
Sandra Mujinga’s work is concerned with mechanisms of representation: the social agency of images and their use in the creation of identities. As part of a generation of artists who seamlessly operate between online and physical spaces, Mujinga uses the exhibition space as one possible arena for artistic work, in addition to Internet and social media, the immaterial networks of music distribution, the social spaces of nightclubs, and activist organisational forms. With a starting point in the sciencefiction genre’s idea of ‘world-building’, the exhibition proposes invisibility as a survival strategy, both as a speculative gaze to the future and in relation to the political reality of our time.

In ‘Midnight’, visitors navigate through a futuristic architectural structure, firstly encountering four oversized, hollow bodies made from textiles: Nkáma, Zómi, Mókó and Libwá (2019). These hooded figures loom high above average human size, in an ambiguous state of guarding, gathering and confronting. For Mujinga, science fiction functions as a template for exploring imaginary worlds where humans are not necessarily at the centre. These sculptures evoke elephants or octopuses, with elements resembling trunks and tentacles. Mujinga is interested in how animals develop survival strategies and adapt to hostile surroundings, for example when elephants stop growing tusks or change from diurnal into nocturnal animals to avoid human poachers. Mujinga often works in series. With the titles Nkámá (Hundred), Mókó (One), Libwá (Nine) and Zómi (Ten), translated from Lingala, the artist is not referencing how many there are, but rather the order in which they will exist in the future.

The question of what it means to exist in the dark is a recurring topic in the work of Sandra Mujinga. In this exhibition however, her sculptures bathe in green light, as a filter added to the appearance of the artworks. The green shade of the ambient lighting is reminiscent of the green screen known from video production, where a green background is superimposed with other images, making the relationship between figure and background fundamentally unstable and interchangeable. Black darkness and the green light are opposites, but also two sides of the same coin in Mujinga’s work. The green screen functions both as a conceptual and material starting point; a space that can be changed into anything, being nothing and everything simultaneously.

In the second part of this exhibition, a figure with vaguely human features hovers mid-air in a darkened space without clear boundaries. This work, titled after the artist’s mother, Flo (2019), is projected through a large-scale hologram screen and accompanied by a soundtrack that Mujinga composed with digitally processed strings. The figure, that may at first glance appear like a video game avatar or a science fiction superhero, is in fact one of Mujinga’s regular collaborators, the actor and DJ Adrian Blount (GodXXX Noirphiles), dressed in one of the artist’s wearable sculptures. The outfit is both artwork and costume, affecting the actor’s mobility with its inflated muscles and superhuman proportions. This work stems from the artist’s fascination with Ann-Marie Crooks, a Jamaican-American former bodybuilder and wrestler; better known in the 1990s by the stage name Midnight.

The hologram technology is frequently used in spectacular stage settings to resurrect dead performers or celebrities, such as Tupac Shakur, seemingly alive on stage. Throughout history, new media technologies have often been used in attempts to connect with the afterworld or to revive the past. In this work, named after the artist’s mother, technology acts as a bridge between our own world and an imagined world beyond ourselves.

In a world that was not made equal for all bodies, and which is threatened with destruction, survival strategies for the future cannot build on the maintenance of an existing order but must reach out towards something else. As an artist, DJ and musician, Mujinga works with a broad spectrum of media and art forms, in a variety of arenas. However, this is not just evidence of a restless creativity that is expressed through various outputs, but also of a critical examination of the existing structures, institutions and contexts for communication, negotiation and representation. Operating from within the exhibition space and the nightclub, the Internet and the stage, Mujinga acts as both artist and organiser, observer and critical voice.

Sandra Mujinga (b. 1989, Goma, Democratic Republic of the Congo) is a Norwegian artist and musician who lives and works in Oslo and Berlin.
www.vleeshal.nl