The Moon has a Complicated Geography 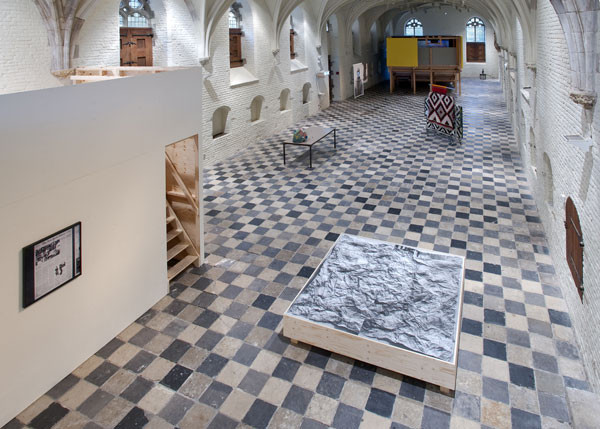 The Moon Has a Complicated Geography is the second in a trilogy of exhibitions exploring the Dutch art scene over the past few years. In 2012 Autumn of Modernism displayed the work of fifteen Dutch artists from different generations who use a variety of media.

The Moon Has a Complicated Geography, the title of a poem by the beat poet Diane Wakoski, is intended as a metaphor for artistic investigation of contemporary developments and the complexity and richness of the present moment. The difficulty of representing what is contemporary is clearly expressed by Giorgio Agamben when he says ‘The contemporary is the one whose eyes are struck by the beam of darkness that comes from his own time’, thus attempting to show what exists but is still in the process of being defined.

This year, just as in the first exhibition, the Middelburg Foundation for Visual Arts (SBKM)/De Vleeshal is starting out with a group of artists who identify links between history and aspects of society that have been changing in recent years – from Willem Oorebeek’s Blackouts, which reveal, as it were, the ghostly invisible side of information, to Hedwig Houben’s performances, which explore the dynamics of the work and, more specifically, the relationship between creating a work and being at work. Vincent Vulsma’s formal translations of elements linking ethnography and the economy focus on this selfsame relationship between work and artwork. The artists Lonnie van Brummelen and Siebren de Haan, who work together, make sophisticated use of moving images to shed light on the links between history and current social change. Arnoud Holleman measures himself with the work of Auguste Rodin, while Gert Jan Kocken focuses on historical moments in which the production and destruction of images come together. Finally, Wendelien van Oldenborgh explores social relationships translated into modernist structures and patterns.

The exhibition looks at the central role of historical perspective in examining the changes taking place in contemporary society.
www.vleeshal.nl