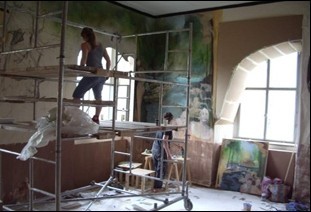 When I was first appointed director of W139 in May 2006, what I dreaded were graduation shows, art fairs and art magazines. As an artist, I had never felt the slightest interest in any of them, but felt that in my new position I should be – and stay – informed of all these things.

So I went to a graduation show which was infinitely depressing: who was this sorry collection of little white cubes intended for? I got hold of a copy of Frieze magazine. In September 2006, Frieze was given over entirely to art education. There was a photo on page 144 but what did it show? A kind of room with a wooden picture rail, a fireplace with a fake fire and books on the mantelpiece. To the left was a painted spiral staircase and faux gothic glass-stained windows, organic plaster lamps, ceiling and wall paintings of romantic landscapes and conspiracies of shadowy monks. Everything was made from cardboard, plaster, paint and light bulbs. The caption read k2 aufbau organisation, tableaux 2006, mixed media. Installation view from Stephan Dillemuth’s class’ final show. Academy of Fine Arts, Munich.

I couldn’t get the photo out of my head. I saw in it the positive mirror image of everything I found distasteful in contemporary art: the overwhelming individualism, the identi-kit hangers-on, the pretentious air of reductionism and intellectualism. My timidity made it hard for me initially to discover who had created the work, subconsciously fearing that I’d only be disappointed. But I finally met Stephan Dillemuth in the spring of 2008 in New York and his students a couple of months later in Munich.

During these encounters I learned that artist collective K2ao (Klasse 2 aufbau organisation) came about through Dillemuth’s class, which originally focused on painting and art education. A number of years previously he had decided to trade standard art education (with its concentration on post-1945 art) for a collective research practice in the local - Bavarian - politics and esoteric sources of the avant-garde and the incidents prior to and resulting in the Räterepublik München of 1918. He christened this project Bohème-Forschung. The students study the individuals, movements and thinking of the various Bohèmes in Munich and surrounding areas, and write and debate about it. From the outset, however, the research took the form of re-enactments, performances, installations and operas.

To my mind, the activities of K2ao are the first practice to really give shape to the over-used term ‘artistic research’. The creative artistic work of K2ao is itself a kind of research. The refreshing and naive way in which K2ao works is kept in balance by the critical gravity with which Dillemuth writes and talks. Initially intended as a two-semester project, “Bohème-Forschung” blossomed into such a fertile melding of people and content that K2ao also began to present it to the outside world. First in the form of a “jahres abschluss” in the art school where they remodelled and painted their class room, transforming it into a nineteenth century salon (the photo in Frieze), in which they threw a masked ball. This was followed by performance in the Frieze 2006 performance programme and guest projects at the Hamburg and Berlin art colleges.

In the context of the thirtieth anniversary of W139 in October 2009, K2ao have been invited to come and spend a month in Amsterdam and make a live documentary about the history of W139. In their approach and their external characteristics, I recognise the anarchic spirit typical of W139’s first years. The interdisciplinary approach and punk’s irreverent D-I-Y stratagem to anything and everything, from nineteenth-century salon painting, to opera singing or acting, leads me to expect that they will render the “Werdegang” of W139 visible and experiential in a totally unique way. With an average age of 23, when it comes to both generation and culture, the group is bound to take an altogether different approach to W139 and come up with objective, totally unexpected observations. The 15-person K2ao collective will live and work in the rear space of W139 for four weeks. Besides the W139 archive, their research will also cover “field work” and interviews. W139 will be open throughout their stay so that visitors can follow the research / creation process. The work process will culminate in a presentation on Friday evening, 30 October. Afterwards, the decor/installation will be on view for another week, until Museum Night.
www.w139.nl