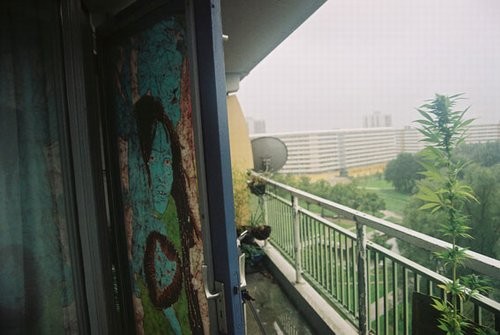 New opening hours: daily from 12 till 6

Amsterdam: shortly after the take-off of El-Al Flight 1862 from Schiphol Airport in October, 1992, the Israeli Boeing 747 crashed into a residential complex in the outlying district Bijlmermeer.
This tragic and still partially unexplained accident, which cost officially 43 people their lives and injured many, opened a Pandora’s box in the Dutch political arena – the secret transport of weapons of mass destruction, the erasure of sequences from the airplane’s black box, and mysterious diseases are only some of the scandals that came to light through the media after the airplane crash happened. For Chanting Down Babylon, the Israeli artist Dani Gal visited residents in the Bijlmermeer district, in particular migrants from Suriname and Africa, as well as the journalist Vincent Dekker, in order to enter into dialogue with them about the airplane crash and about their afterwards reconstructed daily life in the rebuilt residential complex.
Event and memory are strange bedfellows. They determine each another mutually on the one hand, and on the other hand they lead a relationship full of cheekiness and trickery. The conditions of this relationship undergo continuous change. We too cannot do without this unequal pair, because it is somehow constitutive of our being, cognition, action, and our morality: our world view (which we get a hold of by means of documentation). With the help of sources and evidence, this world view readily claims a nonfictiveness in relation to the “real world” and simultaneously allows itself to be grasped by others. But in the documentation of an event, gaps unavoidably arise. There can be particles of information which do not seem important at first—or which do not allow themselves to be documented at all: atmospheres, rumors, life situations, or the spiritual backgrounds of individual witnesses. Further subjective explanations can therefore take up residence in each of these gaps later on, sometimes parasitically; and these explanations always make a new interpretation of the event possible.
With the web of mostly acoustic, but also visual, contents which grew out of his research, Dani Gal created, in this sense, a new subjective black box for the plane crash in Bijlermeer. In the exhibition, he confronts this box with his film Black Magic Marker, a visit inside the secret laboratory of Lee “Scratch” Perry, the upsetter, somewhere near Zurich. In front of the background of Rastafarian culture, Perry’s studio is covered with his own conspiratorial system of symbolic connections. Henry W. Targowsky, founder of the lable “Black Star Liner” tries to put out a new album by Perry and book a tour. The project fails. Perry cancels the tour at the last minute; the studio burns down. The circumstances remain unclear.
Two unresolvable events in a conspiratorial atmosphere. We move searchingly through the exhibition, lost in the desire for an answer and stumbling around with a huge amount of facts and cross-references. And suddenly, on the background, the Star of David too begins to illuminate both events. Zion—the hope for the spiritual return of both the black and the white Jewish diasporas—»Chanting down Babylon«.
The work Chanting Down Babylon was shown 2009 in the Halle für Kunst Lüneburg and was accompanied there by the same-titled artist’s book. It was also shown 2010 in Museum Wiesbaden. And with its appearance at W139, it will be brought back to the point of departure of its research.
www.w139.nl