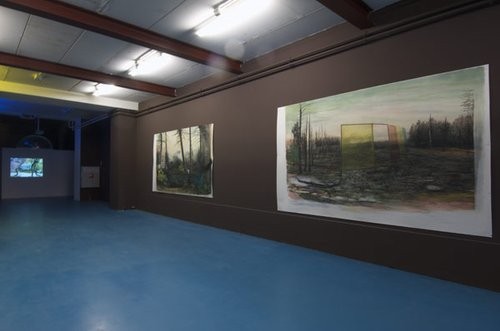 In the front space of W139, Geer van der Klugt presents four new drawings - expansive, empty landscapes of air, trees, grass and earth. Despondent but all bathed in large pools of light. These are the kinds of places I played as a ten-year-old child; an empty strip of land redolent with the scent of giant puffballs. Dusk is drawing in, the scene is drained of colour and your shoes are wet through. You could build a hut here, and live in it. As an adult, I have to take fairly long walks to experience my environment with the same intensity. It takes at least an hour before I approximate the solitariness of a child and his sense of the actual scale of the world. I also encounter it in the drawings of van der Klugt.
This is Slow Looking: although all of the elements are familiar and their cohesion complies with the laws of physics, you can 't help feeling that the drawings resulted from a process that took weeks to ripen. Every section and element are carefully balanced: an unfinished tree is set off against a sky that is only partly covered by a yellow glow; there are zones where pale, light colours have been rubbed away and shadows where layers of dark brown, black and blue pastel have been heavily applied over each other. This delicate balance is what draws you in as a viewer.
The process of drawing a mysterious one. You are trying to capture something fleeting, and discover something new at the same time. There is a constant dialogue of comparison between what you have already got down on paper but isn 't quite there yet, and what you hadn 't expected to see in your own drawing, but which is unmistakably evolving. On this point, Philip Guston once said: "The public doesn 't always realize that it can be hard for an artist to accept what he 's made". And he adds: "The only thing I can say about a good painting is that, at some point, I went with a certain feeling". Which may sound pretty frugal but, as an artist, this is often all the control you have. Sometimes, you might have followed a certain 'sight line ' in a drawing, which draws out a particular feeling that you pick up and go with. The artist 's gift is knowing: I will produce something with a life of its own.