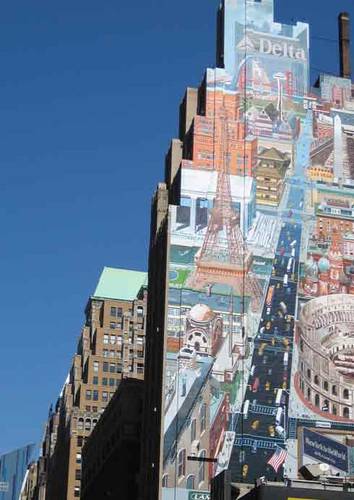 Through its progressive development over the last two centuries, tourism has made a major contribution to our illusion of the world as a global village. Destined to become the most important industry worldwide in the near future, it can be seen as an important metaphor of current cultural globalisation, as well as an extremely suitable area for developing critical approaches to the socio-economic mutations taking place across the globe. Consequently, it comes as no surprise that many artists today are employing the language of tourism in their work, continuing an interest in tourism that has developed over the last couple of decades but working along different lines than the traditional approach.


The Global Tour project, initiated and conceptualised by French curator Amiel Grumberg(1980-2004) brings together the work of twenty international artists who have each developed specific projects around the issues of travel and tourism, their many manifestations and their consequences for contemporary society. Launched in 2003, the project consists of an exhibition and a series of artistic actions designed to establish a dialogue between the art space and its immediate tourist environment.


For more than two decades, before moving to its temporary location in the Post CS building, W139 was located in the ‘epicentre’ of the Amsterdam Red Light District; the Warmoesstraat. This street lies near De Wallen, the historic ‘prostitution district’ that in recent decades has been transformed into a busy and ‘harmless’ recreation zone for international visitors. As ‘cultural commentator’ Trevor Davies pointed out in a report written in 1999, the image of Amsterdam as the ‘Pleasure Capital’ par excellence ‘tends to dominate and block alternative images, counter images and the creation of new images. When images become too strong, reality may take the passenger seat.’ In Davies’ opinion, Amsterdam is subject to gradual Disneyfication. It is being turned into a kind of theme park where activities and events are orchestrated and staged in order to please (foreign) visitors who never experience the ‘actual reality’ of the city. The area’s ambiguous nature and the bi-polarity of the Amsterdam’s ‘public image’ led the late Amiel Grumberg to propose his project Global Tour to W139.

The exhibition GLOBAL TOUR: Art, Travel & Beyond will be accompanied by a 174-page full-colour catalogue. The book was designed by Mircea Cantor and includes texts by Marc Auge, Zeigam Azizov, Ann Demeester and Laurence Perrillat, Amiel Grumberg, Nelson Guerreiro, Oliver Lamm, Anita Pleumarom, Igor Spanjol and Stefan Tiron, as well as contributions by artists Carlos Garaicoa and Dan Perjovschi. The catalogue costs €25 and can be ordered by sending an e-mail to info@w139.nl