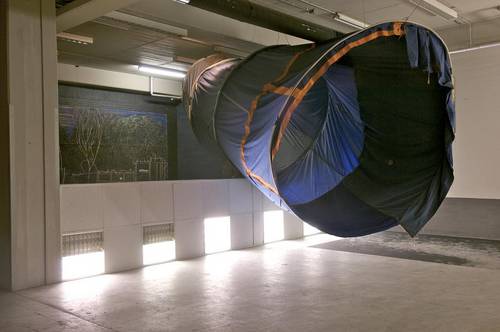 Elena Davidovich (Minsk, White Russia, 1970) paints words. Sentences taken from the Bible and from the account of an eye witness to a resurrection. The conviction that the word, the right word spoken at the right time by the right person, should be seen as capable of action is at the heart of her work. The intensity and vigour with which she draws, colours and embeds words in blocks of colour is comparable to meditation or prayer: a word or short text is rendered over and over, each time with the utmost concentration - not to unravel its meaning (that is merely preparation) but to cultivate its force and all-encompassing power. In 2001, the Stedelijk Museum exhibited work by New Zealand painter Colin McCahon, which also expanded words into huge painted surfaces in a drive to make words acts or events. We tend to interpret a text and to look beyond the image to "deeper layers" while there is nothing more essential than the materialization; both before and behind the surface of artworks lies nothing more than our own fabrications. For W139, Elena Davidovich created an installation with the title “Raised from the dead & The story of the wife”, comprising a mural, a large-scale painting and sketchbooks.
In the comic strip tale “Jack & Dave facing reality” by Dick Tuinder (Hawaii, 1963) two blockheads go in search of truth and reality. However, when they encounter reality – in the form of a smelly little man - they're unable to grasp it. And duly get swallowed up by their own speech bubble. The comic strip can be seen as a parody of many contemporary artists who, despite desperately hunting for engagement with the world at large inevitably end up in the confines of the art world. Dick Tuinder makes films, 3-D work, writes on art in the cultural magazine the Groene Amsterdammer and, under a pseudonym phonetic poetry too, illustrates the ‘poets and thinkers’ feature in the same magazine and, this summer, painted a large vedute of the town San Nicolas on Aruba. In his work, Tuinder boisterously navigates between the crags of messiness and illustration, psychologising, corny humour and religious longing. For his presentation in W139, the thirteen pages of Jack & Dave have been printed in large format and will be elaborated, live, by Tuinder.
For W139, Jantien Jongsma (Harlingen, 1965) painted the twelve months of the year on fifteen metres of paper. A sandy path with cow parsley, a horse-drawn cart with lanterns, an autumn tree, a house with a cast iron fence. The world lives in different times and rhythms, many developments are so fast that they even outpace our thoughts, while other things evolve at such a rate as to be invisible in a human lifetime. The facility of switching smoothly between the world’s velocities and sluggishnesses typifies our sense of reality. For an artist, the difference between first-hand and second-hand experiences is less marked than for others. A highly developed imagination can muffle the blinding force of immediate perception and bring memories, thoughts, images or stories back to life in the here and now. Besides these time layers, in “Man and Horse” different spatial scales are cast against and onto each other: large passages of colour and puddles of paint next to and beneath precise graphic patterning and flower decorations. Not to comment on or lament the fragmentation in the world but to emphasise and point out that there is only one abiding world.
For his graduation from the Rietveld in 2005, Wouter Klein Velderman (Deventer, 1979) presented a small camp site on the square in front of the college. Eight real tents with real campers on real grass. In 2006, for Amsterdam’s alternative art fair, the Kunstvlaai, he glued hundreds of tents together into a colourful rug measuring thirty by forty metres. Klein Velderman is currently constructing a life-size truck cabin from bisonyl (lorry canvas). For the exhibition space at W139 where the current installation by Peter Vink and drawings by Jacobien de Rooij will remain on display, he is making a sculpture from tent fabric to fill the space inspired by, and named after the work of “Hieronymus” Bosch. The relation between influence and result on the artistic process is often an enigma. The work of Klein Velderman may look like that of Claes Oldenburg, but is influenced by Jeroen Bosch. Rene Daniels explicitly refers to Magritte but his paintings closely resemble those of Dufy. What does David Lynch see in Hitchcock’s ‘Rear Window’? What did Philip Guston see in Piero della Francesca, what does Iris Kensmil see in the mosaics of Ravenna? One of the tenets of Frans Oosterhof, under whom Wouter Klein Velderman studied at the Rietveld, is that there is a difference between the taste of looking and the taste of making, and that that’s good.