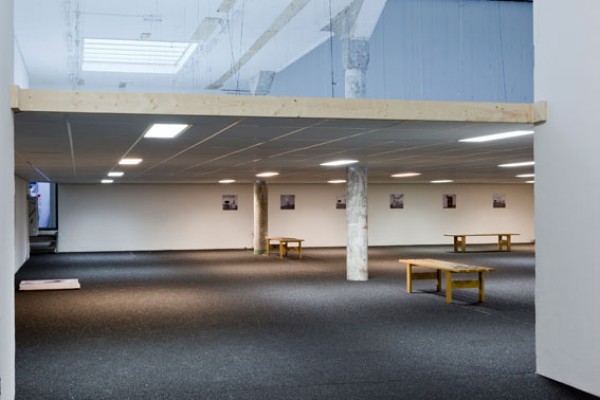 The Stedelijk at W139? What is going on? Jonathan Monk, born in Leicester 1969, once described himself as a jigsaw puzzle gamer who has thrown away the master plan a long time ago. Now he pays a visit to the W139 in order to lay out his puzzle again. And Horn of Plenty - sixteen artists from NYC, in the Stedelijk Museum in 1989, curated by Gosse Oosterhof – provides just some of these jigsaw pieces

Unlike other artists showing with us, who are mostly just starting off into their careers, Jonathan Monk is represented by numerous, international galleries and thus a made artist. In fact, it will be his first institutional solo show in the Netherlands, but his artistic career is closely connected to Amsterdam. He visited Amsterdam in 1989 as a 19 year old art student from the Glasgow School of Art and did what 19-year-olds do in this city –– and also visited the exhibition Horn of Plenty: „My memory of the student trip is a hazy mixture of beer and marijuana. Discos and coffee shops, Jeff Koons and Robert Gober. I do remember smoking a rather large joint after which the ceiling rotated for the entire night...oh, the joys of youth...“. From today’s perspective it was apparently, according to his own words, his most important visit to an exhibition: „Big clean clever bright funny simple possible open closed better playful brash Warholian etc.“. Jonathan Monk’s show From Horn of Plenty to Lowered Ceiling will exactly do, in more than just one way, what the title promises.

Horn of Plenty that were nowadays firmly established artists like e.g. Jeff Koons, Robert Gober, Christopher Wool, Jon Kessler and Richard Prince. The East Village, from its network came12 of the 16 artists, developed from 6 galleries in 1982 to almost 70 in 1985 and back again to 6 in 1988, so to say, it crashed down after the big hype and the show in the Stedelijk was confronted with serious reservations. Oosterhof was recommended to call the exhibition „the harder they fall“. And as a matter of fact, till today, the success of an artist in New York is still directly and inseparably negotiated in the art market. I have to think at the exhibition in the W139 in the beginning of the year: Harm van den Dorpel was our guest who curated Rhododendron with 6 artists of his network. „This show is so New York-style“ was one of several ambiguous reactions to the show. Indeed, there are certain parallels between Rhododendron and Horn of Plenty. Not a bad perspective for Harm and his colleagues...

What I really appreciate about Jonathan Monk’s work is that he makes his occupation with the history and the stories of art to a personal task and a game in which their authoritarian museumification appears unimportant. And if he reenters these stories through some kind of backdoor, it is almost as if he breathes new life into these discarded things and thus even enriches them. In fact, one can only wish that every work gets into Jonathan Monk’s hands. His continuous engagement with other artists and his new interpretations of their work is often a loose revision of his own history – sometimes only of his body length. In this way, he is protecting himself from a boring pure specialisation. In the end, his recourses convince by its visual impact in the present. Every detail in the exhibition is precisely set. And still: „If I knew what I was doing, I wouldn’t be doing it.“

How I am looking forward to resting on a Martin Visser Stedelijk Museum bench in the W139 and inhale, with Jonathan Monk and perhaps even with Ann Goldstein, a huge joint – and what is actually the story behind these shiny black high heels?

Jonathan Monk
Jonathan Monk's work includes a wide range of media including installations, photography, film, sculpture and performance. His tongue-in-cheek methods often recall procedural approaches typical of 1960's Conceptualism, but without sharing their utopian ideals and notions of artistic genius. Instead, Monk grounds his conceptual approach in more commonplace concerns, that of personal history, his family, even pets, whilst still alluding to the types of systems and processes that artists such as Sol LeWitt employed so rigorously. While much of his work is gently playful and tinged with nostalgia for the late 1960's, it also challenges the idea of purity in modern art, demystifying the creative process and suggesting alternative models for how art and the role of the artist can be interpreted. Monk lives and works in Berlin. <http://www.lissongallery.com/#/artists/jonathan-monk/cv/>
www.w139.nl