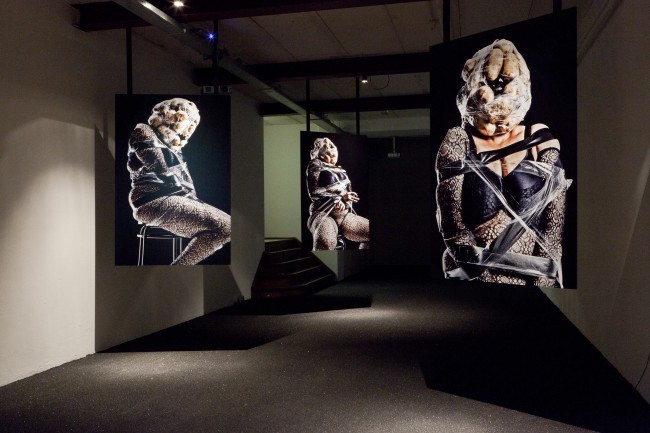 Vincent van Gogh painted The Potato Eaters in 1885, deeply impressed by the honest relation between the peasant’s cultivation of the land, and the consumption of their self-grown crops.

Based on this Dutch ‘icon of authenticity’, Amsterdam based artist and musician Judith Leysner developed a total schizophrenic scenery reflecting the current national climate as it is dominated by a right wing’s populist movement. In the sketches van Gogh made, he emphasized the bond between the farmers’ hands and the soil they cultivate. Both in Judith’s video Solanum and in her photo series Atropa, the bodies are taped firmly and potatoes are fixed to the characters’ heads.

Judith Leysner is most of the time the object in her performances: She barks as her own bandog (Dogg House), and plays “Daddy”, a performance/video on the archetype Father – and that in 12-fold (Daddy). She transforms into the geisha “Kyoko” (Kyokos teahouse) and embodies youthful longing as a ballerina in the performance Muziekdoos (Music Box). In addition, the potato triptych of her show Nightshade points to the conditions of an ‘Otherness’ that is sometimes experienced, sometimes constructed.
In 2010, Judith was the drummer of the grandiose trio The Geert Wilders, splitting up – unfortunately – after two singles and one video. Always putting herself at risk, Judith reflects the society’s state and bites delightedly – and with a loud laughter – the appointed masters’ calves.

The Nightshade Family
As usual, Judith will deliver quite a blast during the opening of her show at W139: besides showcasing her own performance Dulcamara, which is reinstalled for the exhibition, she invited her friends from DOS - Dogs of Shame (artists Abner Preis, Wayne Horse and Kraack Dilla). The Dogs Of Shame will present a small set to present their new EP Shiny Shit, I.E. The Rappical, to be released in September. Afterwards, DJ Sniff (Takuro Mizuta Lippit) will make you dance.

Biography Judith Leysner
Judith Leysner (Amsterdam, NL) studied at the Rietveld Academie, Fine Arts from 2002-2006 and she graduated as a Master Fine Arts at the Sandberg Institute in 2008. She is a multi media artist in the broadest sense. Themes in her work focuses on the ritual, tradition, mythology, desire, female masculinity, literature, history, sexuality, cultural and social identity within a certain context. With new characters (alter ego’s) resulting from this, Leysner makes video work, visual poetry, photography, performances, installations and sculptures. The material of the work depends on the subject. She almost always uses herself in her work in which humour plays an important role.
www.w139.nl