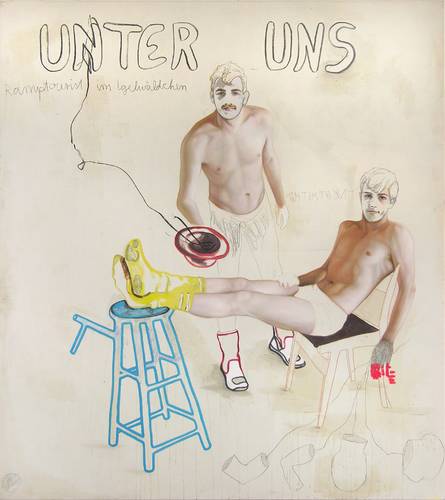 Last week, W139 announced that artist Gijs Frieling will assume directorship of the Amsterdam exhibition space for contemporary art on 1 May 2006. To mark her farewell as director, on Thursday 30 March, from 21.00 onwards, Ann Demeester presents the untitled solo exhibition of Antwerp-based artist Kati Heck (DE).
Have you ever once wished you were illiterate?, asks American writer-artist Frances Stark in an essay on the work of fellow painter Laura Owens. The heterogeneous work of Kati Heck evokes a similar longing – the craving to be textually illiterate, able to think simply and solely in images and visual narratives. The basic raw material of Heck’s memories and experiences are reworked and disguised, transformed and rendered unrecognisable by the use of a hyper-personal iconography. The world she elicits in her recent work is inhabited by centaurs and semi-Amazons, popular heroes, magicians and wild-haired Eastern maidens and is pervaded with visual conflicts and contradictions. A hyper-realistic style of painting is coupled with a sketchy and almost precipitous draughtsmanship. By freely melding references to her own colourful youth with references to the history of the fatherland and Teutonic folklore, Heck is steadily constructing a comprehensive oeuvre that can be read as a private mythology.