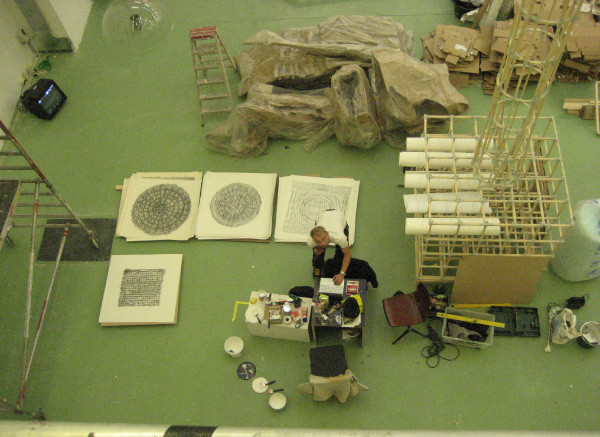 The first work of Alex Fischer that I saw was a concrete bench emblazoned with the words VRIJHEID MACHT ARBEID in high relief. This work ' heavily summarised' displays the principal quality of Fischer's work namely making artworks that consciously evoke a sense of collective indignation. Paraphrasing the notorious Nazi motto makes it possible to consider its meaning in a new way once you've managed to get over the taboo.
Later I saw a T shirt by artist Erik Wesselo with the words POWER THROUGH JOY splashed across it, a translation of the slogan KRAFT DURCH FREUDE used by the Nazi holiday destination Prora on the Isle of Ruegen on the Baltic Sea.
With the self-same objective, Fischer hacked stamps out of living trees to be used to print T shirts and paper, which triggers outrage in people who, without any undue soul-searching will happily buy a garden table made from tropical wood. For me, this springs from the same desire the drove the young Anselm Kiefer to photograph himself in Nazi uniform.
Although he was born after the war, he wanted to share in that guilt, albeit retrospectively. This attitude runs counter to man's natural urge to attempt to ameliorate any moral damage to himself and accuse others of the same guilt, thereby washing his own hands clean. 'I didn 't know about this ' is replaced by 'I'm guilty of this too '.
In W139 this summer Alex Fischer presents a little light fare. During his many trips he has produced almost 200 frottages of manhole covers. Readymade prints. Under the title Drainspotting they form a world map of exemplary industrial / graphic design: anonymous and functional.

It 's incredible to see just how many of the spaces that display contemporary art are furbished to create an impression of neutrality.The thought is that artworks come into their own in a 'neutral space '. As a result, the viewer is more or less unconsciously inserted into this neutral, emotionally low-key environment.
This has huge impact on relating to art that, with this, is steered towards comparison and assessment. The role of art is often to invite the viewer to experience something one-off. Various artists have chosen to make this problem the core of their oeuvre, and have considered the space as a whole their material.
In the Netherlands, for instance,in 1993 in the Stedelijk Museum, 'The Archive' by Ilja Kabakov and,in 2005 at the Bonnefantenmuseum the 'Anschool ' by Thomas Hirschhorn were exhibited. Both installations enveloped the viewer and, within those envelopments, presented objects that could equally have been artworks, reproductions or archival materials.
For W139, Lucia Luptukova is creating a work that both stands in the space and is itself an access point to areas of W139 that are not normally accessible. Moreover, and quite exceptionally, in her building she creates space for other artists to present their work.
The idea behind her work will be on view during the opening of UNDER. The largest part of the work involved in making Ergens anders/Somewhere else will, however, take place during the exhibition and will be accessible to the public. Finally, the work will act as a background and environment for new artworks in the following exhibition Love is like Oxygen.

Photographic images can exert both a magical and anaesthetising effect. This quality is especially pronounced if there are things to see that make us glad we weren't there ourselves. Every accident, injustice or suffering should really appeal very directly to our willingness to take action. But the mediatisation, if it has any effect at all, results in an ever-widening chasm between knowing about something and doing something about it.
The photo of bellying balconies on a collapsed building that Aukje Dekker presents during UNDER was shot by her in Beirut. When, on her return, she looked at the image and realised how little it actually affected her, she decided to
re-colour it as a way of engaging with the image.
Like the fashion photographs of Juul Hondius with war refugees beautiful models in tailored garments and attractive poses her photograph of a bombed apartment in shades of pink and turquoise faces us with a dilemma. It seems cynical and superficial to make something pleasing and appealing from such images of real suffering . But it is in fact far more of a dig at the moralising cliché :you ought to know what's going on in the world. Because, after all, what's the point of all that knowledge ,if it doesn't lead to moral action?

For the entrance of W139 Lara de Moor created a huge painting of thin-stemmed trees in a swamp. The branches are tangled and tattered but a white light filters through the mist fuzzing some of the contours. The painter is practicing pure unadulterated Romanticism here: Horizontal and Vertical, Light and Dark, Nature with a capital 'n' as an image of man's innermost being. It seems an uncontested truth that a subject in
art is only a portal to other experiences. The subject is the generally accessible 'superficial' layer that mediates the experience of 'abstracter phenomena' or 'meanings'. To be able to talk about art you must be able to create such opposites. The reality of an artwork, however, lies always in bridging opposites. Writer and essayist Willem Jan Otten observes that believability is the goal of art all the rest is window dressing. This makes art able to occupy an autonomous space in our experience: a space in which the believability of the visible world can be balanced against the reality that the artwork gives us and that we so miraculously hold to because it collapses the divide between the sensuous and the moral.

A lay-out of A non exhibition will be on display in the front space during the exhibition UNDER. A non exhibition was a project for W139 initiated prior to the renovation by Kasper Andreassen, Ann Demeester and Ad de Jong.
During the renovation activities, making art in Warmoesstraat 139 continued despite the building's closure and lack of public. An investigation, in essays and images, of W139 as a physical and mental space. A non exhibition is now also available in the form of a book entitled: TIME OUT.
The publication contains a visual report of the interventions and essays by various artists plus a selection of photos of the reconstruction work and a version of the W139 archive. The book will be available at a special discount price during the opening.