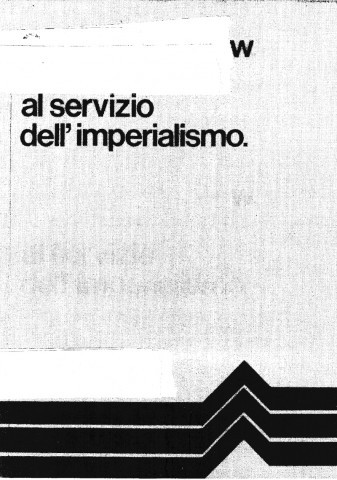 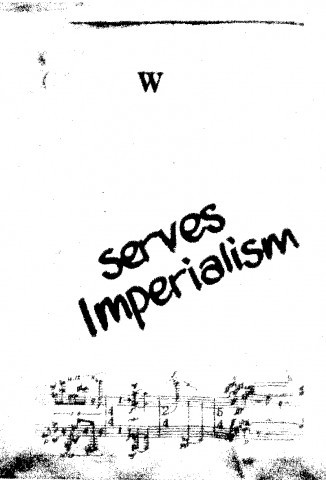 Showing a single “opening specific” audiovisual installation by Jonathan Mikkelsen, followed by the full exhibition the next day.

w serves imperialism focuses on audiovisual works occurring on a timeline, a physical album that alters with each experience due to a given artworks context in sequence. This experiment is a curatorial gesture toward creating a democratic space for a new reception, hoping to break with exhibition norms to result in a heightened focus and absorption of content. The format is inspired by The Museum of One Painting in Russia, which since 1983 shows only one work at a time. To be able to experience an art piece to the fullest, one needs both time and concentration. It is in this sense that the show attempts to provide optimal circumstances.

The title of the exhibition is a redaction of Stockhausen Serves Imperialism, a book written by the composer Cornelius Cardew. After a period of fierce experimentalism at the heart of the upper-echelons of European modern music in the 1950's and 60's, Cardew realized that he wanted to take the freedom he found in the inner workings of his music and apply them it to precarious social situations, to engage in the plight of real people. Denouncing his earlier work as bourgeois, and as being under the influence of Maoist / Marxist doctrine, he created a situation which left no space for anything but workers songs. Ironically, the political undertones of his earlier works are, in fact, the strongest examples of a utopian and emancipatory reasoning.

Cardew's work is woven throughout the fabric of the exhibition, appearing in performance, print, sound, score and text. His spirit inevitably challenges the status quo, clarifying an inherent political property of all art. It is in this sense, that this show pursues the inner-workings of a piece of art as very political indeed, even if the thematic content of the piece is not so by nature.

The current state of media consumption renders us subjects of a sinister attention economy, making multitasking and superficial scrolling norms. This is the manner in which we often move through exhibitions as well, supposedly browsing art with a mere 9 seconds dedicated per artwork. With w serves imperialism, we seek an antithesis, a conceptual approach of curating conscious and qualitative art experiences that provides the time and space to engage in-depth. A screen creates a sound. A score creates the potential for action - simplicity... space.

Within this logic resides a refusal to create a hierarchy or a master-narrative through which to read and experience. Instead each piece carries the same value and importance as the whole. An individual work can be seen as premonitory, existing inside a larger structure, which maintains relationships to its makers, composers, performers and the audience.

The W139 entrance will be transformed into an in-house printing and record cutting workshop, with content reflecting the transitory nature of the sequences being playing out in the main space. These recordings can be purchased alongside a small publication, which functions as index and appendage to the various artworks on display.

A series of events will expand on the substance of the exhibition, including performances of Cardew’s pieces by the DNK-Ensemble, pianola concerts of so-called "impossible music” by composers such as Conlon Nancarrow and more to be confirmed. For further information check our website and social media channels.
www.w139.nl