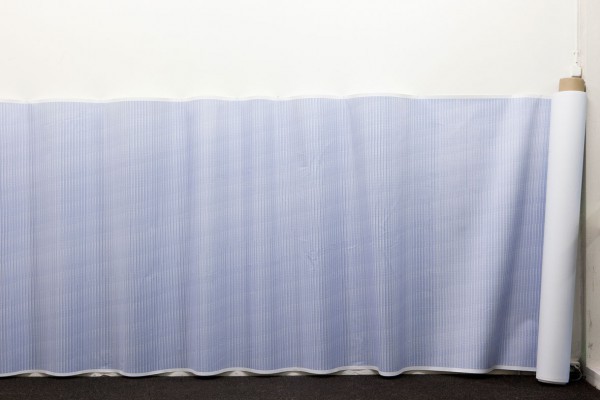 TruEYE surView is part of a series of exhibitions conceptually related to the theme of Post Internet Survival Guide, a catalogue-book put together by myself and published by Revolver Publishing in early 2011. Through works and online archives of young ‘digital native’ artists, I attempted to register survival strategies and tools crucial to us today, trying to re-imagine the very idea of survival and evolution at the dawn of bio-information technologies.

Instigated by the discussions around Post Internet Survival Guide, TruEYE surView presents Anne de Vries (NL) and Yngve Holen (NO/DE), two artists whose work shares a common sensitivity to the merging of matter and information. Both work with a variety of means, mainly photography, installation, video and sculpture. As with an exhibition based on a smart fridge cut in pieces by a waterjet-knife (Holen) or a photograph of a naked woman with a mobile phone standing on her knees in a Cartesian coordinate system (de Vries); their practices access our increasing entanglement with technology, its material and symbolic origins, its influence on our sense of social reality, its socio-political implications and its future potentials.

From the mines, energy plants and factories, where the hardware basis of information technologies comes to being, to brand names, advertising images, product displays, personal use, and ultimately piles of toxic waste – commodities undergo a variety of state changes throughout complex ecological cycles. Considering that what lies at the heart of every living being is genetic information, we are approaching an uncanny valley where life and technology co-exist in a blurry commonality of their informational origin and material essence, each propagating an agenda of their own. Neolithic agricultural revolution for instance, can be seen not as an invention – a new human technology – but a state change, a result of co evolutionary development between humans and edible grasses. In this process of collaborative deforestation of land only some benefits were shared by humans. If we can look at the spread of Internet of Things as equivalent to the Neolithic agrarian revolution, then what is information technologies relationship with us as species? What does it take for a commodity to live, and what are the ecological principles of art?

Curating this exhibition is a next step in approaching a 'neo-materialistic' understanding of contemporary art as a domain of heightened density of value flows, and information technologies as an expanding ecology. In TruEYE surView Anne de Vries and Yngve Holen are merging these domains in fluid assemblages, proposing visionary semi-stable structures out of material flows that are constitutive of today’s digital data driven society.

Yngve Holen (NO, b. 1982)
lives and works in Berlin. He graduated from the Staatliche Hochschule für Bildende Künste (Städelschule), Frankfurt am Main. Recent solo exhibitions include Parasagittal Brain, Johan Berggren Gallery, Malmö, Half Asleep to the 2010 Hot One Thousand and One, Neue Alte Brücke, Frankfurt am Main, Paloma Presents, Zürich and Landings Projectspace, Vestfosse, Norway. Selected group exhibitions include Approximately Infinite Universe, New Jerseyy, Basel (2008). He recently co-curated the exhibition The Smart Frrridge, is also co-initiator of the web-based publisher XYM and co-organizer of the club BODY XEROX. <http://www.johanberggren.com/holen-001.html>

Katja Novitskova (EST/NL, b. 1984)
is an artist, curator and graphic designer born in Estonia, living and working in Amsterdam. Novitskova’s artistic and curatorial work has been exhibited and distributed in places like the Future Gallery / Transmediale in Berlin, Mediamatic, NIMK and W139 in Amsterdam, New Capital in Chicago, Woodmill in London; with upcoming shows at New Gallery in London, Xpace in Toronto and B Galleria in Turku among others. <http://katjanovi.net/>
www.w139.nl