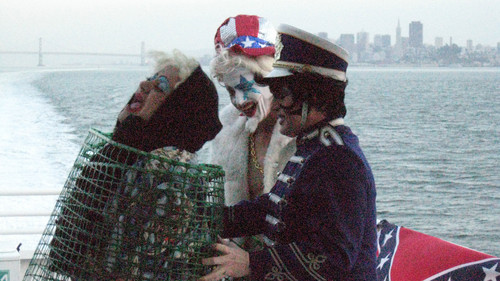 The Mason-Dixon Line at the top of Maryland is historically regarded as the cultural boundary between the Northern and Southern United States. Nicknamed the "Old Line State," Maryland has a history rooted in blurring and transgressing this border. Maryland's motto, "Fatti maschii, parole femine" (manly deeds, womanly words), reflects another ideological boundary: that gender is socially produced and partitioned through performative acts and codes.
Richard Thomas Jr. was raised on Mattapany, a family plantation in Maryland. He was an adventurer and Confederate army officer who served with Garibaldi fighting for Italian independence, where he encountered zouave regiments incorporated into various armies. These soldiers styled their uniforms and training strategies after French Algerian and Berber soldiers, wearing fez caps, loose trousers, blue high-cut jackets and leather leggings. Thomas' enthusiasm for the cultural hybridity of 19th century colonial Europe, reflected in the orientalist dress of the zouave soldiers, led him to adopt the last name of Zarvona.
During the Civil War, Zarvona broke from his state's Union affiliation and became the Colonel of the First Regiment of Baltimore Zouaves, made up of rebel Marylander confederates. He became infamous when he seized the Union-bound passenger steamer, St. Nicholas, from Baltimore during the first year of the Civil War by dressing in women's clothing as Madame LaForte. Flirting with the passengers before joining a crew of disguised accomplices to commandeer the ship, he and his crew were able to hijack the steamer and two smaller ships loaded with provisions.
Another border crosser in Maryland's history is the actor, Harris Glenn Milstead, known most famously as the drag queen Divine. Born in Towsen, Maryland, Milstead performed in theatre and movies, most notably in the films of his boyhood friend John Waters. Milstead's Divine was an abject and conspicuous caricature who often transgressed the boundaries of moral conduct, exaggerating feminine sexuality and style. Embellishing the mixed Northern and Southern style of Marylander women to a gregarious degree, and incorporating primitivist and comical makeup and dress, Milstead exposed the absurdity inherent in the control of conduct.
On April 6, 2009, a motley group of drag performers and costumed audience members staged a show on a commuter ferry traveling in the San Francisco Bay. Combining the role-playing strategies of civil war reenactments and drag performance, Manly Deeds, Womanly Words involves a subversive re-staging of the Zarvona story as a drag show, culminating in an exhibition of documentation of this event, as well as a publication. This exhibition investigates the performance of identity, the various moments that borders are crossed through subversive attire and interpretation, and looks to how the exaggeration and appropriation of cultural and gendered models creates a transgressive transvestitism.