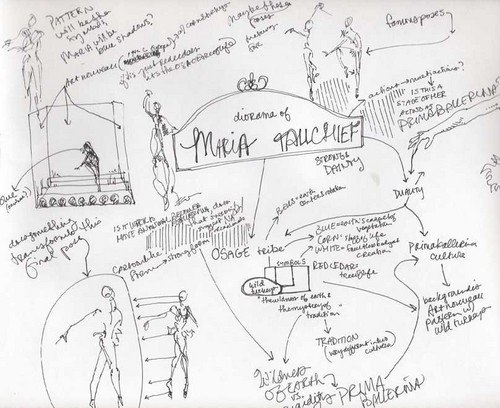 Maria Tallchief is America's first prima ballerina. Born in 1925 to a Dutch mother and Osage Indian chief father in Fairfax, Oklahoma, Tallchief was poised for greatness: she began training as a ballerina at a very early age, and moved to New York City at seventeen to begin auditioning. She first danced for the Ballet Russe de Monte Carlo, and became choreographer George Balanchine's muse after joining the New York City Ballet in 1948, where she was anointed the first prima ballerina. After retiring from her renowned dancing career, she went on to found the Chicago City Ballet in 1980, which still endures as an extension of her creative legacy. Tallchief is heralded for her achievements in both Anglo and Native communities; she was awarded the American National Medal of the Arts from the NEA by President Clinton, a documentary film has recently been made in her honor, and a larger-than-life bronze statue stands immortalizing her in Tulsa, Oklahoma.
Tallchief's seminal performance in the title role for Balanchine's 1949 The Firebird is featured in this display. Tallchief was, and is still, considered the most technically perfect ballerina of her generation. She is represented more abstractly in the vitrine by Art Deco wallpaper replete with Osage symbolism: the turkey refers to the wildness of the earth, corn to the staff of life, and red cedar, the tree of life. Tallchief herself has said: "I think it is an innate quality that Indians have to dance. They dance when they are happy, they dance when they are sad. They dance when they get married, they dance when someone dies."
A hypothetical, dual narrative has been constructed to explore the potential psychology of Tallchief. The prima ballerina has been placed in direct connection with, and in juxtaposition to, conceptual artist Eleanor Antin's Black Ballerina, a failed and fictitious persona, who is represented here by drawings sourced from her journal "Being Antinova."
Antin's Black Ballerina, Eleanora Antinova is a character the artist first developed in 1973 and that the artist performed between 1978 and 1989. Like Tallchief, she was an American ballerina chosen by a Russian choreographer (Diaghlev) to dance in his famed Ballet Russes at the turn of the century—except this version met a pitiful ending. The only minority in the troupe, Antinova—both black and American—was subjected to blatant discrimination and abandoned by history, left to waste away in the aftermath of her brief career. Essentially, Antinova serves here as the id to Tallchief's super-ego.
A woman simultaneously shaped by her Native American heritage and by the extremely rigid, exclusive European tradition she mastered, Maria Tallchief accomplished far beyond what mainstream America must have expected from a woman of her status in the early part of the 20th century. Both ballerinas represent a danseuse's version of the American dream: one version is representative of failure, the other an unflagging beacon of success, the phoenix—or rather, the Firebird, rising.

A special thanks to Michelle Antonisse for her collaborative spirit.
www.wattis.org