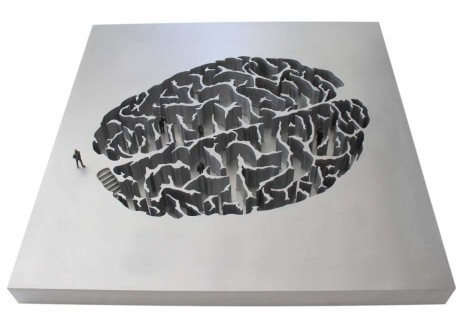 Cinematic Moments is the first exhibition in an annual series titled The Order of Things drawn from the Kadist Art Foundation Collection. The exhibition aims to break down the structure and production of cinema—specifically film, an important facet of California culture—into stages that are normally obscured. Cinematic Moments asks what type of knowledge an exhibition is capable of producing, particularly as an exploration of the workings of a preexisting form of production—a form that is directly related to the culture of its California surroundings. Cinematic Moments is constructed as an architecture that invites the viewer to step inside a moment in time.

The exhibition begins with a small book by the artist John Miller, who is based in New York and Berlin. His works, which range from painting to installation, are often critical yet humorous recapitulations of images and sets from iconic American films and television programs. The book, titled Cinematic Moments, was originally self-published in 1979 and has since been reprinted. It is a series of prosaically written descriptions of moments Miller deems cinematic. Often no longer than five sentences in length, the descriptions range from a solicitous internal monologue to illustrations of specific visual scenes and emotional states. They are often mundane, yet strikingly real. Miller’s book collides individual moments such as scenes from a film, one negative after another, through simple juxtaposition.

The exhibition takes Miller’s approach as a guiding structure, juxtaposing artworks as individual parts in a mise-en-scène. The featured artworks are arranged in three sections, each centered on a passage from Miller’s book. The text passages and the artworks in each section aim to describe a stage of cinematic production. In “Pre-production,” the viewer is asked to step inside an environment meant to stimulate creative thinking. Here the works describe the processes of storyboarding, character development, and the abstract and at times concrete spaces of idea formation. “Production” offers a glimpse into the building of a film. The works take on myriad characteristics of projects that recontextualize objects, casting them in their cinematic roles as props. In this section the artworks in play defy their component parts and become the objects they represent, enacting the trompe l’oeil of a set designer. “Post-production,” commonly known as editing, is the process by which films are composed from their component parts. This third section offers a series of elliptical and at times false narratives built through works that describe the translation of ideas through objects, sometimes questioning the very nature of narrative itself.

The exhibition ostensibly explores three components of time—past, present, and future (or before, during, and after)—as representative of filmmaking’s behind-the-scenes production stages of idea formation, instrumentation, and organization. But the final product, the film, a narrative written to captivate and inspire, is withheld from the viewer, thus overturning the standards of American spectacle-based culture. Paradoxically, Cinematic Moments offers the viewer not a finished product but the possibility of a glimpse inside a mechanism of creative production.

The curator will be giving gallery walkthroughs every Tuesday at 12:15pm. The walkthroughs are free of charge, and open to the public.