How to Build a Universe 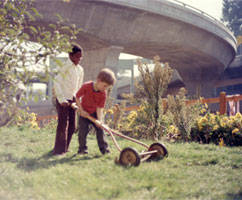 
Curated by Will Bradley, "How to Build a Universe That Doesn't Fall Apart Two Days Later" revolves around contrasting visions of the future put forward in California in the mid-1970s. The exhibition is on view in the Logan Galleries November 28, 2006–March 24, 2007, on the San Francisco campus of California College of the Arts. An opening reception will take place on Tuesday, November 28, from 7:30 to 9:00 p.m. The exhibition and reception are free and open to the public.

"How to Build a Universe That Doesn't Fall Apart Two Days Later" takes its name from a 1978 essay with the same title by science fiction author Philip K. Dick, in which he compares the speculative building of worlds by artists and writers to scenarios imagined and constructed by governments, corporations, and the mass media.

Dick writes, "Unceasingly we are bombarded with pseudo-realities manufactured by very sophisticated people using very sophisticated electronic mechanisms. ... And I have to build them in such a way that they do not fall apart two days later."

In 1974, artist Bonnie Sherk founded the Crossroads Community (The Farm), an experiment in community agriculture and education, which was also a "life-scale environmental and social artwork" underneath the Army Street freeway interchange in San Francisco. Around the same time, NASA researchers, led by Gerard K. O'Neill, were drawing up plans for the U.S. colonization of space. Their proposals were illustrated in 1976 in a series of paintings by artist Rick Guidice.

Works by contemporary artists—shown alongside Sherk's and Guidice's original projects—present alternate scenarios, explore the ways in which our physical reality is defined, and critique the ideological narratives that attend its construction.