Many Places at Once 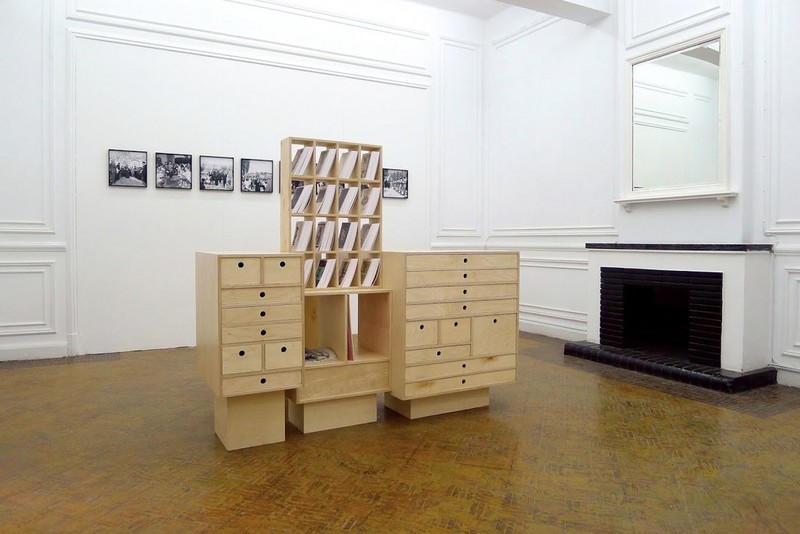 Rana Hamadeh
Al Karantina Installation view in The Magic of the State exhibition, Beirut in Cairo, 2013
Cabinet with various objects and original documents
67 x 19 1⁄2 x 63 inches
© the artist, courtesy of the artist
MANY PLACES AT ONCE
17 April - 12 July 2014

Many Places at Once is an exhibition curated by the graduating class of the Graduate Program in Curatorial Practice at California College of the Arts with the support of the Wattis Institute for Contemporary Arts.

Decades after the "post-studio" turn announced by Minimalism and Conceptual art in the 1960s, Many Places at Once reconsiders the place of artistic production in our era of creative industries and flexible labor. Featuring new commissions and existing works by seven international artists, the exhibition presents artworks that call attention to the nuanced circumstances that characterize the economic, social, and technological conditions in which artists work today.

The exhibition departs from the performance entitled At Work 1983 by the Vancouver-based artist Ian Wallace (b. 1943, Shoreham, England), in which the artist presented himself in the window of the artist-run Or Gallery in Vancouver, late at night, seated behind a simple desk, engaged in reading, thinking, and drawing. Staging himself before the city’s nightlife as an intellectual worker rather than a paint-spattered bohemian, Wallace embraced the new nature of art as thought over making, while reflecting on his new identity with tongue firmly in cheek. Many Places at Once includes a video of his original performance and large-scale drawings he produced during his tenure in the gallery window. New photographs in Ian Wallace’s Hotel series (1986–ongoing), made for this exhibition, marry photography and painting, and show the temporary “studios” that are the hotel rooms he occupies as he travels.

Alongside Wallace are recent works by other artists that embody different notions of the place of artistic production. Cinthia Marcelle (b. 1974, Belo Horizonte, Brazil) produces drawings while attending art events such as artists’ talks. Martin Soto Climent (b. 1977, Mexico City) makes the pages of his journals and notebooks his site of production. Rana Hamadeh (b. 1983, Beirut, Lebanon) creates sculptural cabinets and vitrines where her archives are displayed, which she animates through performances. William Powhida (b. 1976, New York) generates diagrammatic drawings that reflect critically on the art world and the network it represents. Through videos and performances, Li Ran (b. 1986, Hubei, China) uses mimicry, satire, and irony to challenge the representation of artists' identity and work. In dialogue with the above, the shared studios of Oakland-based Real Time and Space (established in 2011) evidence a continuation of the artist’s studio as a physical location, with the added dimension of group self-organization.

Taken individually, each contemporary work presents a site: a hotel, a notebook, an archive, a network, an event, or a theatrical stage. Together they constitute the “many places”—physical and conceptual—that “at once” constitute a reimagined artist’s studio.

An accompanying publication will provide an opportunity for further engagement with each featured practice through interviews with the artists, focusing on their processes and places of production.

The exhibition’s programming will engage the Bay Area arts and education communities to develop dialogues on the pressing issues facing artists and creative professionals, with several conversations and public roundtables. Many Places at Once will also feature performances or events by Rana Hamadeh, Li Ran, and members of Real Time and Space. For a schedule of these programs, please visit the our calendar.

An accompanying publication will provide an opportunity for further engagement with each featured practice through interviews with the artists, focusing on their processes and places of production. Download publication here.

About CCA’s Graduate Program in Curatorial Practice
Founded in 2003, CCA’s Graduate Program in Curatorial Practice offers an expanded perspective on curating contemporary art and culture. Alongside traditional forms of exhibition making, this two-year master’s degree program emphasizes the momentous impact over the last half-century of artist-led initiatives, public art projects, site-specific commissions, and other experimental endeavors that take place beyond the confines of established venues. It is distinguished by an international, interdisciplinary perspective, and it reflects San Francisco’s unique location and cultural history by placing a particular importance on the study of curatorial and artistic practices in Asia and Latin America. For more information, visit cca.edu/curatorial-practice.
www.wattis.org