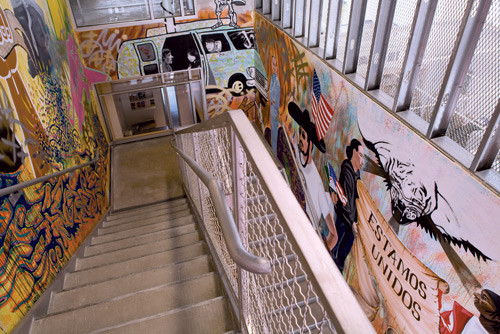 Mario Ybarra Jr. was the Capp Street Project artist in residence at the Wattis Institute in summer 2007. For his first solo project for a San Francisco public art institution, Ybarra has created a large-scale mural that examines the history, anecdotes, and mythology that surround mural making in the Bay Area. His mural will be on view on the staircase outside the entrance of the Logan Galleries.

To conceive his mural, Ybarra has taken an almost anthropological approach toward the local neighborhood, the greater Bay Area, and his own identity as a Mexican American artist making a mural today. He has investigated material from a disparate array of sources, including the iconography and language of urban murals, the defining characteristics of Bay Area street culture (whether Mexican American or African American), and the complex socioeconomic situations in the neighborhoods near the Wattis Institute (Hunters Point, Potrero Hill, the Mission, and SoMa).

Ybarra is part of a generation of Mexican American artists who, in contrast to many of their forebears, do not reject their American identities but embrace both of their backgrounds equally and mutate them for critical effect. Ybarra is based in Los Angeles, where he grew up, and a large part of his prolific artistic practice has grown out of issues related to his upbringing in the Mexican American community of Wilmington. He consistently explores the culture and political heritage of America's West Coast to produce, as he says, contemporary art that is filtered through a Mexican American experience.

Ybarra was born in Los Angeles in 1973 and continues to live and work in that city. In 1999 he earned his bachelor's degree from Otis College of Art and Design, Los Angeles, and in 2001 he received an MFA from the University of California, Irvine. His work has been presented in solo and group exhibitions at Tate Modern, London (upcoming 2007); Prague Biennial 3 (upcoming 2007); the Manchester Art Gallery, England (2007); the Institute of Contemporary Arts, London (2006); Serpentine Gallery, London (2006); California Biennial, Orange County Museum of Art, Newport Beach, California (2006); Tijuana Biennial, Centro Cultural Tijuana, Mexico (2006); the Los Angeles County Museum of Art (2006); Hyde Park Art Center, Chicago (2006); and Astrup Fearnley Museet for Moderne Kunst, Oslo (2005).