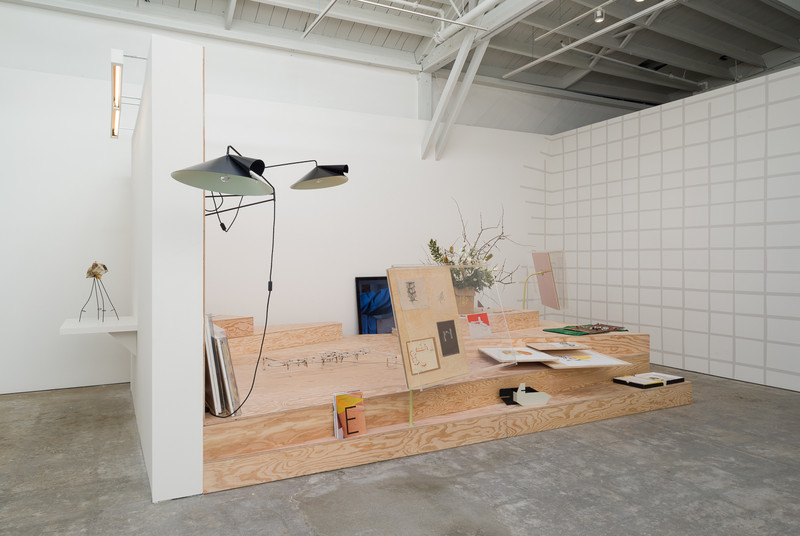 After spending the fall in San Francisco, Nairy Baghramian presents Off Broadway.

A central idea for Nairy Baghramian's exhibition is a consideration of the nature of the prop. Her departure point is a scene from Les Demoiselles de Rochefort, a 1967 musical film by Jacques Demy, starring Catherine Deneuve and Gene Kelly. In several scenes of the film, Demy uses artworks as props to help build his characters and their relationships to the world. Instead of being independent works of art, the objects perform cameos or stand-ins for the film’s plot, such as a portrait of an “ideal woman.”

The starting point for the project is to pose two questions. One is to examine how the perception of a critical failure or a lack of success—or the identification of problems—can actually ignite closer interest. The second begins with the observation that contemporary visual art routinely leverages other disciplines such as literature, dance, film, magazines, fashion, interior design, architecture to add value and extend the notion of art. But what if this cultural relation is reciprocal: what is the status and efficacy of art moving in the other direction, or playing a supporting role such as in Les Demoiselles? What if an exhibition embraces the notion of art performing a supporting role? (Nairy Baghramian)

To address these questions, Baghramian splits the gallery in two: on one side is a traditional white wall, and the other side is “storage.” One by one, each work is displayed on the white wall for a short time: they maintain their autonomy as works of art and assert themselves as the protagonists of their own story. Each work then joins the others in storage and becomes another “prop,” ready to serve a supporting role in someone else’s story.

This residency and exhibition are made possible by Institut für Auslandsbeziehungen, the Goethe-Institut San Francisco, and Galerie Daniel Buchholz, with special thanks to Silberkuppe.
www.wattis.org