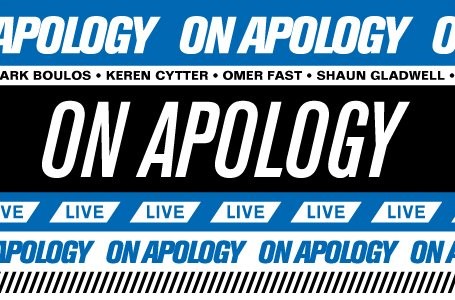 On Apology is an exhibition produced by the graduating class of the Graduate Program in Curatorial Practice at California College of the Arts with the support of the Wattis Institute for Contemporary Arts.

The public apology has in recent times become a widely prevalent phenomenon. Politicians, corporate and pop-culture figures, from Bill Clinton to Toyota’s chief executives, have openly expressed remorse for everything from minor private indiscretions to major corporate wrongdoings. The mechanisms for “saying sorry” are crafted for broad public consumption and conveyed through the mass media, and are accordingly all-pervasive. The effectiveness of the broadcast apology is complicated by public expectations for reconciliation or recompense, and the unlikelihood of these expectations being met. Despite the fact that overuse has arguably rendered the apology a bankrupt form of meaningful expression, it persists as a means of damage control, and, ironically perhaps, of enshrining a kind of idealism.

On Apology, references Jacques Derrida’s 2001 essay “On Forgiveness,” which provides an insight into views on the act of forgiving, and the possibility of genuine forgiveness versus the complexities of amnesty, apology, and contrition. Similarly, the show itself seeks to outline the multifaceted perspectives and exchanges of power that are central to the formulation of apologies, with the works navigating the integrity of sincere regret, fraught apologies or even the absence of contrition. It intends to question, under what circumstances are apologies warranted? Can one person apologize on behalf of another? Is the value of the apology contingent upon written or spoken language, or do symbolic, performative gestures speak louder than words? On Apology investigates public and private iterations of the apology, examining how apologies are formed, their subtlety or lack thereof, and their potential, if any, to accomplish real change.

About the Graduate Program in Curatorial Practice

Founded in 2003, CCA's Graduate Program in Curatorial Practice offers an expanded perspective on curating contemporary art and culture. Alongside traditional forms of exhibition making, this two-year master's degree program emphasizes the momentous impact over the last half-century of artist-led initiatives, public art projects, site-specific commissions, and other experimental endeavors that take place beyond the confines of established venues. It is distinguished by an international, interdisciplinary perspective, and it reflects San Francisco's unique location and cultural history by placing a particular importance on the study of curatorial and artistic practices in Asia and Latin America.
www.wattis.org