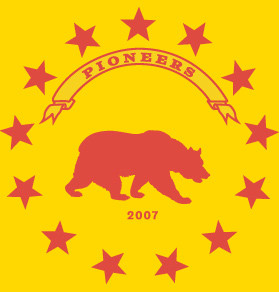 What's past is prologue. —Shakespeare

Pioneers draws an analogy between the achievements of pioneering artists from the last 100 years and the character of California pioneers in the nineteenth century. Pioneers will take the form of both a cultural history display and an exhibition of artworks by pioneering figures from the San Francisco Bay Area. With the two strands interrelated, overlapping, and interwoven, the common themes are traveling to new frontiers and breaking new ground.

Beginning with a selection of artifacts that document San Francisco's gold rush–era origins, Pioneers expresses the founding impulses that continue to resonate with the city's social and cultural climate—its particular independence, tolerance, progressiveness, and internationalism. The twentieth century was a period of intense creative activity and political resistance, during which a large number of radically innovative practices were established in the city. San Francisco became home to several pioneering artists, who helped establish the city as a center of artistic experimentation that reflected in microcosm larger social and political actions and initiatives.

Pioneers seeks to identify some of these artistic figures who developed their own unique, pioneering practices in choreography, performance art, film, photography, painting, craft, and political graphics.

The exhibition includes a selection of artifacts from the collection of the Society of California Pioneers.