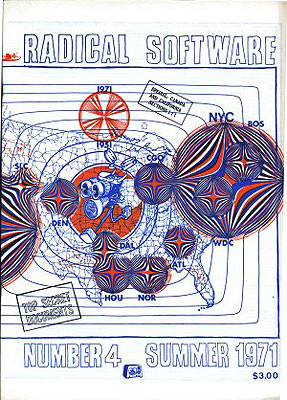 At the first Hackers' Conference in 1984, Stewart Brand—former Merry Prankster, founder of the Whole Earth Catalog, the Global Business Network, and the Long Now Foundation—made his often-quoted claim that "information wants to be free."
Radical Software, which is cosponsored by Wired, will combine artworks, experimental film and video, documentary material, and artifacts that trace the (counter)cultural discourse that made Brand's assertion possible: from its early manifestations in the postwar bohemian underground to its adoption as a basic principle by a new generation of artists, hackers, and activists.
Charting previously unexplored connections between art, technology, radical politics, and the psychedelic underground, the exhibition will bring together radical and experimental work by internationally known and emerging artists, plus commissioned projects, public works, historical artifacts, and new research.

Curated by Will Bradley
www.wattis.org