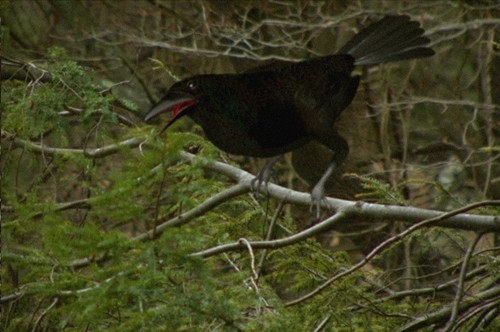 The New York-based artist Jordan Wolfson's films and installations often combine strategies of classic conceptualism with an exploration of personal experiences, emotions, and a poetic sense of potentiality. The artist frequently plays with ideas of repetition and makes digitally animated films that are then transferred onto 16mm film. In Wolfson's piece Dreaming of the dream of the dream (2004), a 16mm film is looped endlessly until the film stock is destroyed. Once the film has completely worn out it will never be remade. The single copy of the film is comprised of hundreds of clips from animated cartoons depicting water—whether the ocean, a river, even a rainstorm—symbols of life and its temporality. In the work included in the Passengers exhibition, Perfect Lover (2007), a realistically animated crow marks the hours of the day in a human voice. Wolfson's film is a meditation on mortality and the passage of time with an unmistakable reference to Felix Gonzalez-Torres' work Untitled (Perfect Lovers) (1991), two wall clocks that are initially set to the same time and inevitably fall out of sync with each other. The crow is often characterized as a bad omen or a signal of coming change, and this film relates to an untitled work the artist created for the 2006 Whitney Biennial in which he attempted to manufacture an omen by luring crows, with an audio recording of their calls, to the top of the museum.

THE CROW AND THE FOREST
by Jens Hoffmann

Talking animals are a recurrent subject in mythology; entire fables have been created around them and they appear frequently in folk stories and fairy tales. This use of talking animals as a literary device typically comes from a writer's desire to combine human behavior with the characteristics of a specific animal often to point towards a larger moral lesson. In recent times, however, talking animals in stories have largely been employed for satirical purposes or for the entertainment of children and younger audiences, devoid of any deeper meaning.
The 16mm film loop Perfect Lover (2007), by New York-based artist Jordan Wolfson, features one such talking animal, in this case a crow. At first glance the piece seems to be a low-tech natural history film, to be presented perhaps in a high-school biology class. While the projector sits on a portable media cart, the film is projected on a mobile screen more often used for slide projections or amateur film-nights. As if studying the behavior of the crow, this film presents the bird in different locations within a North American forest. We see the crow in a number of close ups: on the branch of a tree, on a small rock in the middle of a creek, on a pile of logs, or simply on a heap of leaves. As soon as the film begins the crow starts to count the hours of the day, 'one o'clock, two o'clock, three o'clock, four o'clock...', until it reaches midnight. It then states the date of the next day and starts counting again. Eventually the crow begins to count out of order and stops, interrupted by a cough, only to start once more.
The title of Wolfson's piece refers to the work of another artist who has frequently used birds in his practice, while having a tremendous influence on similarly conceptually-minded artists emerging over the last decade, the Cuban-born Felix Gonzalez-Torres. The title of Wolfson's film is a direct reference to a work made by Gonzalez-Torres closely titled Perfect Lovers (1987-90), which consisted of two wall mounted generic clocks that are set to the same time only to fall, inevitably, out of sync after a few days. While Gonzalez-Torres mainly employed images of seagulls in his work, it is less the type of bird, but rather the romantic and minimalist sentiment, that Wolfson is trying to capture for his own piece. Yet, for all its lyrical qualities Perfect Lover also contains a lot of humor. The absurd scenario of a raven counting out the hours of a day offers enough comical effect to make most who see the film for the first time laugh. Only upon second inspection does the somewhat ominous nature of the film become apparent.
While the seagulls in Gonzalez-Torres pieces speak about freedom, liberty and the ability to cross (ethnic, sexual, and national) borders, the crow has since ancient times traditionally been viewed as a messenger of death. In this vein Perfect Lover could perhaps be considered as a present-day memento-mori, an artwork that reminds us of our own mortality. The symbolism of a dark forest as the mythological home of strange and threatening things creates a perfect setting for the crow to deliver its ironically timeless message about the certainty of death.
www.wattis.org