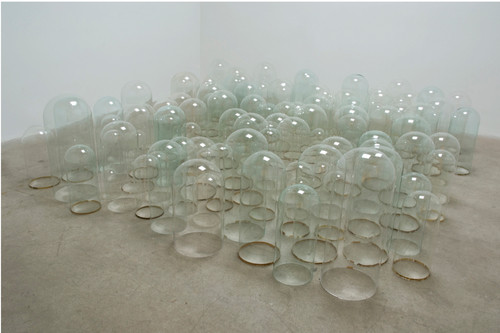 Kris Martin is the spring Capp Street Project artist in residence, and one of the seven artists participating in the Wattis Institute's three-year program The Magnificent Seven.
Martin is based in Ghent, Belgium, and he is among the most celebrated European artists of his generation. His conceptual practice centers on the fragility of the human condition; his frequent use of the readymade—from boulders to texts by Dostoyevsky to common nails—alludes to the poignancy inherent in everything that surrounds us. Martin's work draws attention to temporality and, in the centuries-long tradition of the memento mori, provokes viewers to remember death's inevitability. Rather than being entirely somber and ominous, however, his minimal sculptures, drawings, photography, and installations possess incisiveness and grace as well as a disarmingly earnest humor and wit.
Over the course of this semester, Martin is living in San Francisco and serving as a guest faculty member at CCA. He is leading a class of 13 graduate Fine Arts students in creating new works on the subject of time, a universal truth with which all artists—and of course all people—must contend. Graduate school is a period when art students are developing their own practices, their own career paths. And so, Martin finds it appropriate to transform the private space of the classroom into the public space of an art gallery, with the latter's new set of expectations around finished pieces and the status of the working, professional artist. The gallery is divided into 13 autonomous-but-public spaces, one per student, via a grid of red lines. Martin is working in a 14th space, the entire gallery, and has given himself the same task that he has given his students: to devise new works that investigate issues of time and duration.
The seminars and tutorials associated with the course will take place within this gallery, together with the physical production of the new works. The gallery is open to the public during the Wattis's regular hours. Over the spring semester the lines that divide these studios, and the isolation they imply, will probably blur. In the final weeks, the project will culminate in a formal exhibition occupying the entire space.
Student artists: Simone Bailey, Mark Benson, JJ Campanaro, Daniel Dallabrida, Melissa Dickenson, Elizabeth Dorbad, Christine Elfman, Liam Everett, Bean Gilsdorf, Stephanie Halmos, Radka Pulliam, Ida Roden, Jonathan Runcio
Lead sponsorship for the Capp Street artist residency of Kris Martin is provided by the Nimoy Foundation.
Founding support for the CCA Wattis Institute for Contemporary Arts programs has been provided by Phyllis C. Wattis and Judy and Bill Timken. General support for the Wattis Institute provided by the Phyllis C. Wattis Foundation, Grants for the Arts / San Francisco Hotel Tax Fund, Ann Hatch and Paul Discoe, and the CCA Curator's Forum.
www.wattis.org