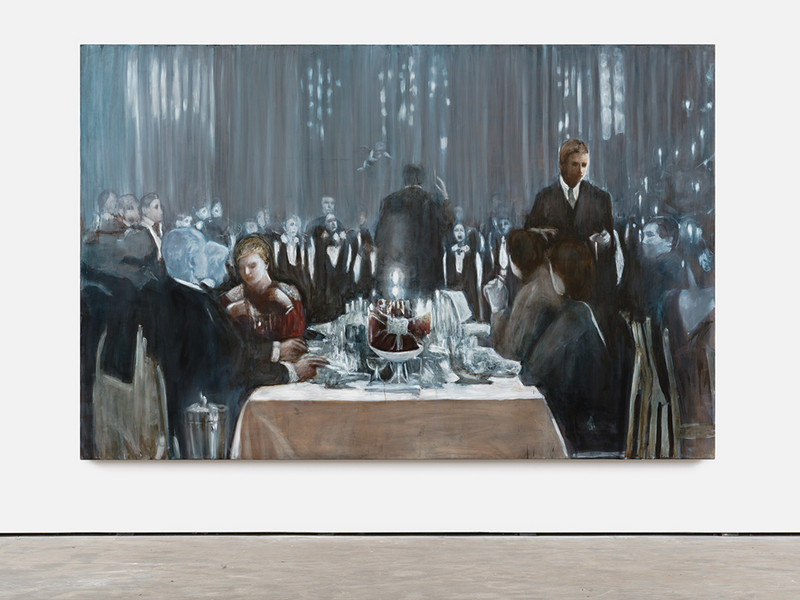 The approach is at once both personal and richly referential. First Axel Geis photographs his own chandelier from seven different angles, then he creates paintings based on the photos — all at the same time and under the time pressure that he finds productive for his work (“otherwise it becomes too tentative”). Looking at the “Chandelier” paintings, you get the feeling you also get after a good meal enjoyed with a great deal of wine when you try to keep your head from spinning as you rise and walk around the table. The eyes reel. Geis’s modest but nonetheless perceptible modifications of perspective from painting to painting evoke the Illusion that it is not we viewers who move, but the chandelier itself. But this has nothing to do with intoxication in the dining room.

“Torqued Chandelier” is the name of a 2005 work by the Canadian artist Rodney Graham that furnished the motif for Geis’s most serial and, strictly speaking, conceptual work to date. In Graham’s film, sumptuously shot on 35mm stock, nothing is visible except a spinning chandelier. With “Chandelier”, Axel Geis turns the whole thing around. For the seven paintings hung on the walls reflect a chandelier that actually is not there — and that lacks just one candle, so that the various perspectives can be better discerned. Whereas Cubists unite all views of an object in one picture, Geis distributes them among several pictures, thus positioning the viewer at the hub in the truest sense of the word.

What enables this conceptual ruse to work at all has to do with Axel Geis’s virtuosic mastery of the tools of the figurative painter. In an elaborate process, Geis primes his canvases with white ground so often that the coarse structure of the textile virtually disappears. Then he applies eight to ten layers of colored glazing, which effectively traps light between the layers and lends the painting depth and complexity. At the very end, a varnish is applied which enhances the translucent effect. This procedure makes it impossible to adopt a definitive standpoint vis-à-vis the paintings. Their reflective surfaces shift you back and forth in front of the chandeliers, and their sparkling resembles the dazzle of a real chandelier more than one might expect from a representation on canvas.

That’s why Axel Geis prefers to paint in the corner opposite the windowed wall of his studio, located on the fifth floor of an industrial building in the Berlin district of Wedding. He needs the slanted light and its changing aspects on the repeatedly over-painted and translucently whitened reflections. “The paintings react very sensitively to the lighting conditions in the exhibition space”, he says. However, the sensitivity of a canvas is very different from the sensitivity of a camera sensor. A painting can’t simply be moved from one place to another like a file on a hard disk. Each hanging is also an attempt, an experiment — as good painting always should be.