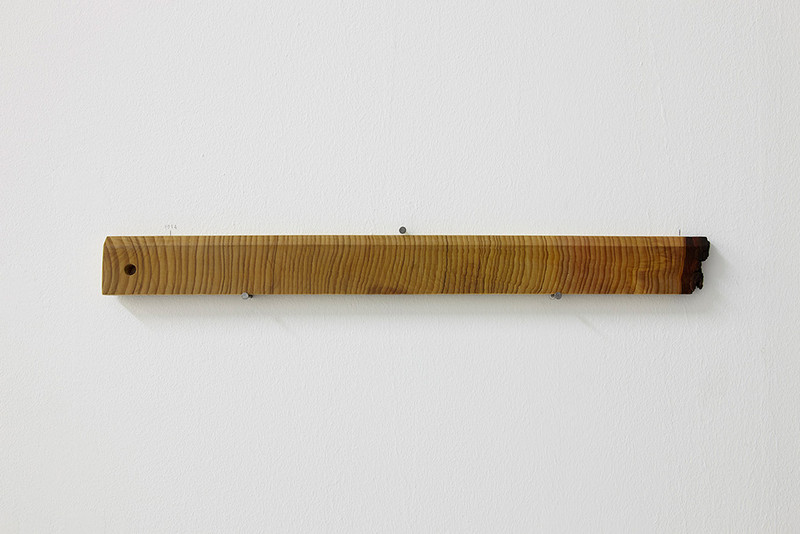 The exhibition by Turkish artist and musician at WENTRUP shows three objects that deal with representations of time. Erek appropriates instruments that one usually knows to measure space with, like rulers e.g. or objects like LED displays which he changes in use. He equips these tools with altered scales such as daylight or tree-rings. Therewith, a less normative definition of measuring and representing time evolves that suggests the possibility of contingent time-spaces that are much closer to how we experience them on an everyday, personal level.

The most inconspicuous and smallest work in Cevdet Erek’s first solo presentation in Germany is a ca. 30 cm long rectangular piece of cederwood that is structured by growth rings running vertically, ending with the tree bark to the right. Above the wooden slab to the left, at the first growth ring, there is a pencil marking on the wall, a vertical stroke accompanied by a number: 1914. This year, i.e. one hundred years later, Erek created Ruler Centenary, which simply marks off the 100 intervening years using the tree’s annual growth rings — up to the present when, as the title states, a 100th anniversary is being commemorated. So on the one hand, we see a naturally-created measuring instrument whose celebratory significance functions this year alone. On the other hand, which centenary is meant? The hundredth anniversary of the starting of World War I, or instead perhaps, as seldom noted, the centenary of the start of the collapse of the Ottoman Empire? Or something with no world historical significance whatsoever? The question highlights the contingency of the humanly created decimal system. The growth rings appear august and solemnly dignified in comparison to the historical attributions of significance — the rings engrave themselves again and again, year after year.

Much as Erek, who lives and works in Istanbul, initially uses the gradually emergent gradient of difference in the coloring structure of the tree itself as his measuring stick, in Ruler Day Night (2011) he translates natural phenomena into a reduced, abstract visual language. Instead of the typical millimeter or centimeter scaling, alternating black and white square-like fields are visible on a 100 cm long ruler. Upon closer examination, it quickly becomes clear that no one interval is the same as the next — the ruler does not offer us what we expect of it. Here the differing daytimes and nighttimes determine how much white and how much black we see. Across cultures, day and night structure quotidian life and are subject to greater or lesser variations, according to the respective geographical standpoints. Erek’s Ruler Day Night can also be understood in specific relation to its location, as the length of the days and nights – which are represented by width of blacks and whites – are taken from prayer times listings as numeric data and are then converted to graphics by drawing each one by one. In the Islamic world, the calendar of sunrises and sunsets represents not only an essential component of the daily structure of prayer; beyond that, it is also an omnipresent influence on the organization of secular daily life. The first field on Ruler Day Night represents September 14th, 2011 – the first day of the 12th Istanbul Biennial for which Erek had made it.

In Day (2012) Erek likewise takes the natural rhythm of light as his starting point — and translates it back into artificial light. An LED display – often used to show texts – pulses from left to right. Like most of Erek’s works, Day is always site-specific. A series of LEDs depicts minutes of daylight, which have been calculated for the duration of the exhibition, in which one LED bulb represents one minute. The light-time of the exhibition day illuminates the gallery as accelerated impulses course through the space. The works in jahrundtagundtag are representative of the artist’s strategy of converting instruments that usually measure space or display textual information into tools to measure time. Erek, an artist with an academic background in sound and architecture, creates objects that represent the passage of time in its truest sense through the use of variable scalings as opposed to typical normative measurements. His objects acknowledge the variable swiftness of the passage of time precisely as we experience it.