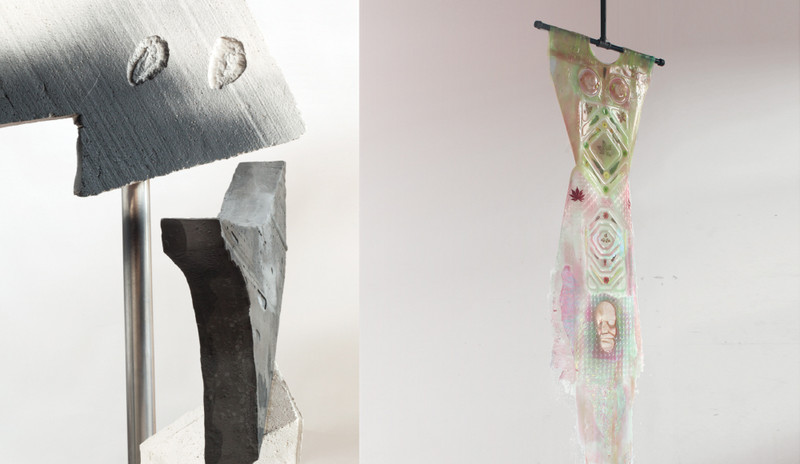 The work of the Dane, Cristian Andersen, and the Canadian, Amy Brener, are seen together for the first time at Wentrup.

Cristian Andersen’s recent work continues to develop the artist’s examination of the relationship between sculpture and its pedestal, and how such concerns can be addressed through a context as specific and familiar as Los Angeles, where the artist also has a home. The push and pull between the materiality and the metaphor of the urban structure is seen in the work Lincoln Heights (2016), where the clean lines and basic forms of the concrete block are held aloft by red, yellow, and green steel pipes. Questions about urban planning, social justice, and tensions between public and private space are further brought into focus through such site specific works as Sundaymorning – Daybed (2015), which was installed in a public park outside of a church in Zurich. By distributing form across context, materiality, and metaphor, Andersen breaks up the surface structure and negotiates a new environment for abstracted images to reside among, and within.

New York based Amy Brener embraces the primary concerns of sculpture – including surface, force, and materiality – in order to examine daily life through a geological sense of time and scale. There is tension in her work between ornament and functionality, between preservation for display and preservation for future use. This is suggested by the diversity of her materials and their potential applications. Dried plants, tech debris and consumer goods are embedded in resin or silicone, often with the addition of iridescent materials, and the effect is uniquely poetic and tactile. In Brener’s most recent series, which will be on view, abstracted silicone garments ask provocative and timely questions about surface, protection, and the body. More than simply an affirmation that clothing is an armor or second skin, the Flexi-Shield sculptures embody fictional ecosystems and technological networks that address human fragility, interconnectedness and transcendence in our current moment.

He has shown his work in numerous solo and group exhibitions in galleries and institutions around the world. Recently he showed a bronze sculpture measuring six meters in height in New York City’s City Hall Park as part of an exhibition initiated by the Public Art Fund. Related to a Public Art Commission a permanent installation of Andersens sculptures can be seen at Meierhoffplatz in Zurich since last year.

Amy Brener (born 1982 in Victoria, BC, Canada) lives and works in New York.

Most recently Brener was part of the exhibition Greater New York 2015 at MoMA PS1 in New York. Her work has exhibited at institutions and galleries such as Derek Eller and Marlborough Chelsea in New York, NY and MacLaren Art Centre in Ontario, Canada. Brener received the NYFA Fellowship for Crafts/Sculpture in 2015 and attended Skowhegan School of Painting and Sculpture in 2011.

Works by Amy Brener are in the Francis Greenburger Collection and Beth Rudin DeWoody Collection, both New York, NY and the Rachosky Collection, Dallas, TX.
www.wentrupgallery.com/home/