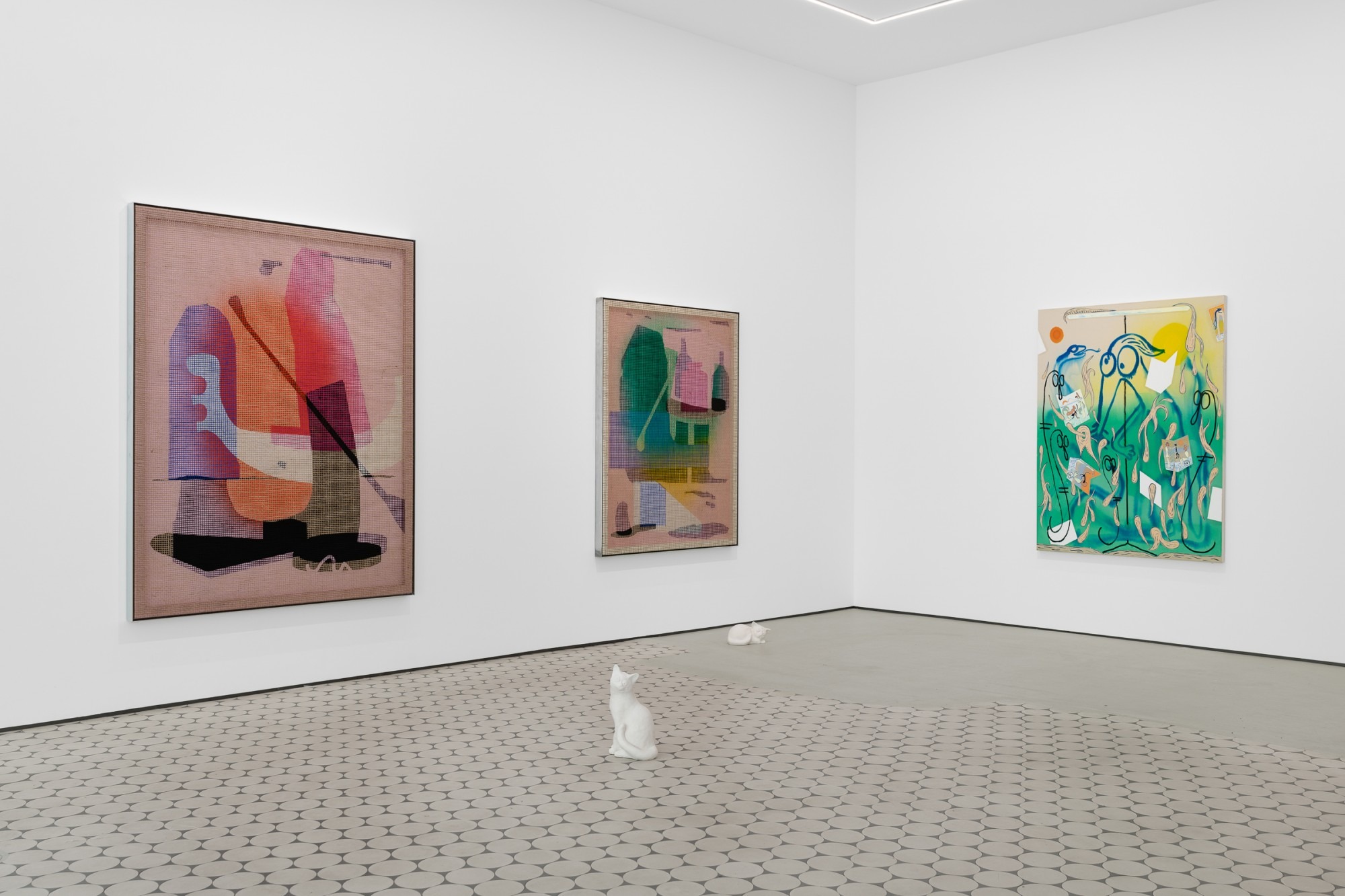 The background is brought to the fore, the foundation of all paintings is moved into focus: the grid. In their latest works, Florian Meisenberg and David Renggli focus on the structure and the material of the canvas.

Florian Meisenberg uses the canvas as a modern fresco in which he mixes primer and pigments into one another like watercolors or more precisely like a tie-dye. Already in the moment of priming the canvas, he intervenes in a painterly manner to achieve a particular luminescence of the colors. Here, Meisenberg has worked with programmed household robots that project cyclically, and painfully slowly, the canvas’s memory onto itself with Indian ink.

David Renggli brings the microstructure of the linen on the canvas to a macro-level, like detailed zooming-in of the canvas material through which we gaze on color planes that become a support of paint.
In his earlier works from the Desire Painting series, Renggli worked with floor plans of luxury apartments as formgiving elements and symbols for desire and abstract thinking. In these recent paintings, the point of reference is Venice, exploring its imagery through the city’s architectural vernacular and imagery such as the gondola boat, that offer a different yearning, albeit the same value system.

With Florian Meisenberg, primordial creatures that seem to originate from the depths of YouTube, Guilty Dogs with exaggerated long snouts, protozoans and multi-cellular creatures, offer us different derivates of self portraits. The canvas becomes a platform where the viewer links one pictorial plain to the next, which Meisenberg sometimes alludes to with windows and in others, the subject within those windows.

The correspondence develops between Florian Meisenberg’s creatures and David Renggli’s cat sculptures that are distributed around the gallery space, all of which are covered with the digital watermark “a”.
Through the ‘alamy-stockphoto-marks’ that can also be found in the paintings, Renggli raises the question of who owns whom, and asks whether works of art can undermine the appropriation of external Internet mechanisms by alamyzation—i.e., by copying the copy protection. The collective virtual memory, fed by countless cat and dog videos on the Internet, is triggered—intentionally or unintentionally—for the beholder when her or she sees both Renggli’s cat sculptures alongside the recurrent creatures in Florian Meisenberg’s paintings.

In late June 2019, Meisenberg will open a duo exhibition with Anna K.E. at Kunstpalais Erlangen, Germany. He is also represented in the large survey show Jetzt! Junge Malerei in Deutschland at Kunstmuseum Bonn, which will later travel to Museum Wiesbaden, Kunstsammlung Chemnitz, and Deichtorhallen Hamburg (all Germany). Further upcoming group exhibitions include Zabludowicz Collection, London,Great Britain; Künstlerhaus Bremen and the Museum der Bildenden Künste in Bremen (all Germany).