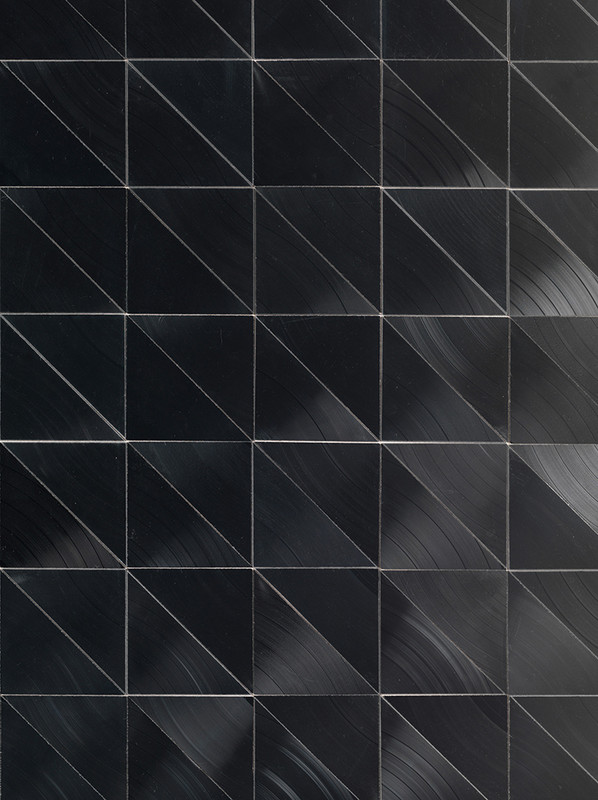 A full-length dressing room mirror as a portal to Hades. Orpheus touches the mirror’s surface. Concentric circles ripple out from his finger, the glass liquefies, and he slips through a quicksilver sea to the other side. Jean Cocteau adapted the tale of Orpheus, the tragic bard from Greek mythology who unsuccessfully sought to rescue his wife Eurydice from the underworld, for his film Orphée (1940). Hundreds of ribbons of videotape of an endless loop of Cocteau’s film form the black rustling and mirroring walls in Gregor Hildebrandt’s May 2015 exhibition Auf Wasser schlafend rauscht das Meer [slumbering on water, the sea murmurs] at WENTRUP. Hildebrandt’s extraordinary talent for transforming materials, which he has continually developed and refined in installations over the years, is consummately manifest here. Hildebrandt assigns a new function to the audio- and videotape, a material in now dwindling use for recording and preserving sound and moving images, by employing it as an artistic medium. Liberated by Hildebrandt from its canister, this vehicle for now-invisible images and silent sound acquires a broader, very different function. The streamers of tape comprising the walls of the exhibition become dark, permeable curtains behind which a parallel world awaits – a creation equivalent to Cocteau’s mirrored portal, which itself is imperceptibly depicted in the ribbons of recorded film.

Within his installations, we encounter things that testify to what might be called a Hildebrandtian nostalgia and fascination with storehouses of discarded sounds and images. For example, there is a canvas composed of hundreds of rectangles in earthy colors. The image initially appears to be a mosaic interspersed with fields of midnight blue and gray. But the artistic material used in Hildebrandt’s canvas is the little scrap of felt that presses the cassette tape against the recording head in audiotape cassette recorders; hundreds of them are brought together here in an abstract pattern. Other objects on display, in addition to the cassette tape, lead to deeper comprehension of Hildebrandt’s transformation of the quotidian into the poetic. Saturnischen Getränke [Saturnian drinks], for instance, represents an accidental and astonishing momentary event. One day in his apartment, Hildebrandt shut the door of a glassware cabinet and inside it, a perfect ring broke off the rim of a champagne flute. This ring, looking quite like the Saturnian ring of ice and stone, now sits upside down upon its original glass. Here one sees all the more clearly how Hildebrandt’s exhibition is imbued with the surrealist idea of making permeable the solid partitions between dreamworld and reality. His canvases and objects, and in particular his large-scale installations, are an invitation to stroll for a while in his parallel world. The WENTRUP exhibition builds on two previous Hildebrandt installations – Die Geschichte läuft über uns [history marches over us] in New York and Orphische Schatten [Orphic shadows] – and now takes shape in a third overarching form in Berlin. Auf Wasser schlafend rauscht das Meer makes an additional reference to Cocteau: at the end of the film, as in Hildebrandt’s exhibition, everything seems to have happened only in a dream.

Works by Gregor Hildebrandt are in the public collections of the Centre Pompidou, the Berlinische Galerie, Berlin (Germany), the Saarland Museum in Saarbrücken (Germany) and the Museum van Bommel van Dam (NL) as well as numerous distinguished private collections.
www.wentrupgallery.com/home/