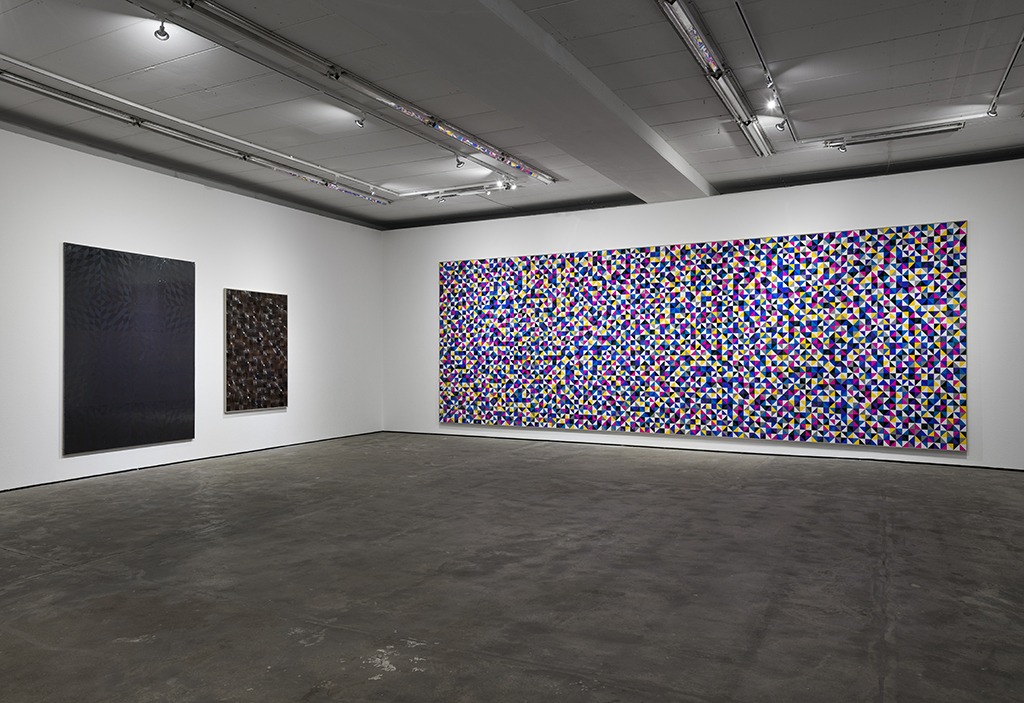 Galerie Wentrup is pleased to present Ein Zimmer im Raum, its 7th solo show by Gregor Hildebrandt (born 1974 in Bad Homburg, Germany), who lives and works in Berlin and also teaches as professor of painting at Munich’s Akademie der Künste.

His minimalist oeuvre, which Galerie Wentrup has been presenting since 2004, engages primarily with concepts of cross-media transfers of music and poetry into visual art. Hildebrandt’s core material are almost exclusively sound recording media, such as magnetic audio tapes and vinyl records, which he processes, or records something on them before using them on canvas, in photographic prints, or in expansive installations.

The starting points for his up to this point most colourful show are the title Ein Zimmer im Raum, borrowed from poet and novelist R. M. Rilke, as well as the black-and-white photograph on the invitation. It shows the view from the artist’s bed towards the ceiling. Just like in the descriptions by Victor Hugo, Stefan Andres, and Xavier de Maistre in his Journey Around My Room, and others before, Hildebrandt gazes into the supposed void and imagines the whole world: the authentic source of his thematic universe, from which his extremely rigorous oeuvre grows – it offers the idea of using obsolete recording techniques which transfer, on a level that resonates invisibly, romantic themes in a contemporary way for today’s audience.

The sleeping room, the centre and the ultimate retreat of almost every apartment, serves in Hildebrandt’s case to this day as an energy source for his creative work. Surrounded by peace and quiet, and despite the seemingly empty ceiling (or perhaps precisely because of it), the room fills when he looks up, unexpected ideas and thoughts start coming to mind. Only marginally noticeable is the Jugendstil window frame leading to the building’s backcourt, exemplary for the truncated link to the exterior world.

The seemingly simple initial view of the interior develops a universe of its own that can be separated into elemental parts, which are then pulled back together. Lying down quietly, the artist starts a journey of discovery, explores new territories, real and imaginary ones, going on an intellectual Grand Tour which provides him with new inspiration. And as he observes how the white of the wall interacts with the light of his round lamp, it transforms into a planet that starts to rotate.

This surrogate moment of that transformation is visually stimulated by the structured ingrain wallpaper now covering all the gallery’s walls. This wallpaper, so typical for West Germany in the 1970s into which Hildebrandt was born, expands the usual gallery dimension in a surprising and subtle manner.

As part of the exhibition, a monumental panel painting is formed of 624 multi-coloured vinyl records that were cut apart to 7488 triangles and then reassembled like a mosaic, with recordings of a musician who is a close friend of the artist. In a different work, Anni Albers, whose fascinating formal vocabulary thrilled and inspired Hildebrandt early on, led him into a hypnotic daydream. The succession of patterns of the woven upright format in black is an expansion of the meticulous tapestry drawings by the Bauhaus pioneer. Its diagonally offset hanging lets this work function as a counterpart to the actual front door, like an opening into infinite artistic possibilities. The backs of the compact cassette cases of the letter case form a reverse projection of the view from the bed: the artist, dressed, lying, lost in thought, gazes back. This exact counter-image to the invitation card is the projection surface that, as an opposite, keeps inviting Hildebrandt to enter into an inner dialogue. – text by Gawain von Mallinckrodt

In October 2018 Gregor Hildebrandt will be honored with a comprehensive solo exhibition at Kunsthalle Recklinghausen.