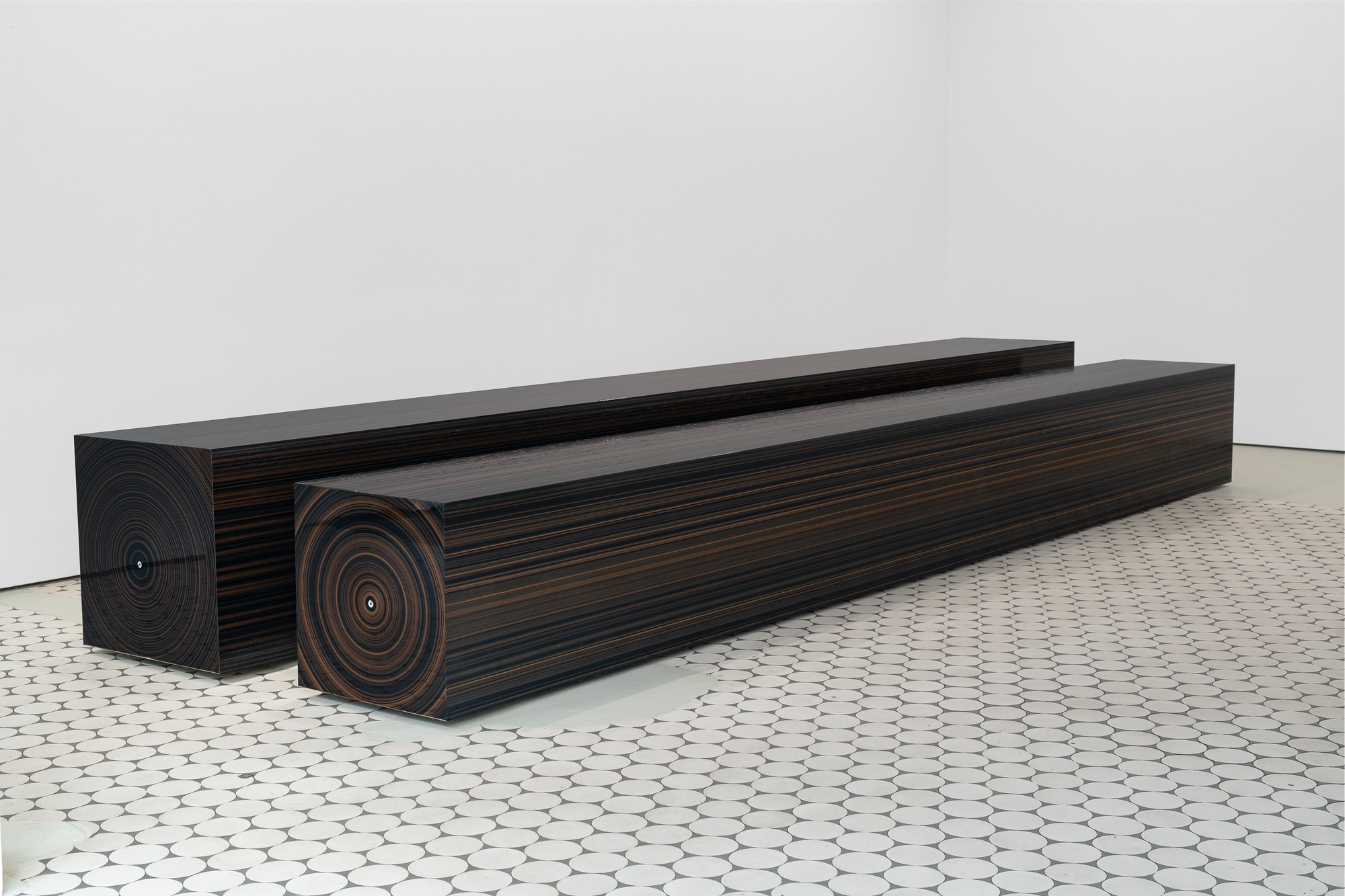 Fliegen weit vom Ufer fort, the title of Gregor Hildebrandt’s eighth solo show at Wentrup, is a line from the rather moving sailor’s song Die großen weißen Vögel that Ingrid Carven sang in 1979. The celebrated German actress, chanson singer, diseuse, and diva sings in her distinctive voice with its deep melancholy about seagulls carrying the souls of sailors on their wings.

Like Gregor Hildebrandt (born in 1974), Ingrid Carven was born in Saarland, where both also grew up. Hildebrandt’s grandmother Oma Gisela’s house is in Sulzbach. There, next to the entrance, on an artistically designed window, three of the white birds from the song seem to take off on their flight into the distance. As a child, Hildebrandt admired how the seagulls fly out of the door on this light-flooded mosaic made of glass blocks.

The central work, Seht ihr die weißen Möwen dort?, pays in this respect homage to the Hungarian-German artist and architect György Lehoczky (1901-1979), who, despite his spectacular local commissions, is today largely forgotten. In Saarland, Lehoczky left traces everywhere, because between 1949 and 1966 he designed and outfitted numerous buildings there, including train stations, churches, schools, and indeed residential buildings, like Oma Gisela’s. Not least with this blue custom-made, unique window, he made a name for himself as a glass designer. Hildebrandt revives this blue window by imitating the stones with cut-out vinyl records. For the current exhibition, Hildebrandt turned the motif in such a way that this time, the seagulls can fly out into the world through the gallery’s glass door.

The title, also taken from the above-mentioned song by Carven, underlines the autobiographical reference to Saarland: It is a song title of the Munich band Anne first LP too, whose producer is Hildebrandt and was established by the artist’s friends from his youth in Saarland and a student in his class (Hildebrandt is a professor at the Munich academy).

Even though the voices of the different pieces of music are not audible, Gregor Hildebrandt succeeds with the help of their stories to directly condense different dimensions into a personal mesh.

Back to Carven’s Fliegen weit vom Ufer fort, which since 2007 has always been played after the encores at concerts of the band Tocotronic (Hildebrandt is a fan) and is thus linked to the central installaton Ich habe Stimmen gehört. “It was a long way,” the song goes, “I was like driftwood of time.”

Wood was also the motif of a work in the past exhibition at Wentrup, In den Adern des Holzes sehe ich Gesichter, a framed panel where slices of wound cassette tape are arranged in the form of a end-grain parquet floor. The massive varnished wooden beams placed next to each other seem to be covered by a strongly reflective, brownish-black grain, and appear like dark rosewood or palisander. A dream-like game where the dimensions of perception overlay one another. The appearance is deceptive—the tree trunk in fact consists of magnetic tape wound around a little wheel—and yet at the same time it isn’t. Both objects stand both for themselves and as a representation of a wooden plane; they are simultaneously raw materials, sculpture and image.

There are numerous references to the material wood in Hildebrandt’s work. It contains references to artists in the borderland between pop art and minimal art like Richard Artschwager, and at the time it also harks back to an early work from 2003. In one of his very first works, Hildebrandt declared disks of spruce wood to be records, and instead of grooves in vinyl, here the tree rings stand for the sound.

Outside in front of the gallery’s window front and under his black flag, woven from cassette tapes, we see (almost at eye level) another recurrent motif of the oeuvre: the pawn of a chess game. Personified into a person by its sheer size, the black bronze figure stands proudly guard. It is no accident that the shape of this sculpture reminds us of the contours of a well-known girl with a similarly wide skirt: the Infanta Margarete Theresa from Diego Velázques’ painting Las Meninas.

Apart from the world of music and other transmitters of sounds—records, tapes, and videocassettes—the game of chess is another large treasure chamber from which Hildebrandt constantly draws ideas and forms. With this concept, Hildebrandt grasps anew the hidden beauty and romanticism of everyday objects that often seem almost obsolete.

The exhibition fans out into the gallery’s backspace. There, Hildebrandt shows for the first time in a film loop his virtual collection of chessboards; he photographs their patterns tirelessly whenever he discovers one. And that is just the beginning. – Text by Gawain von Mallinckrodt