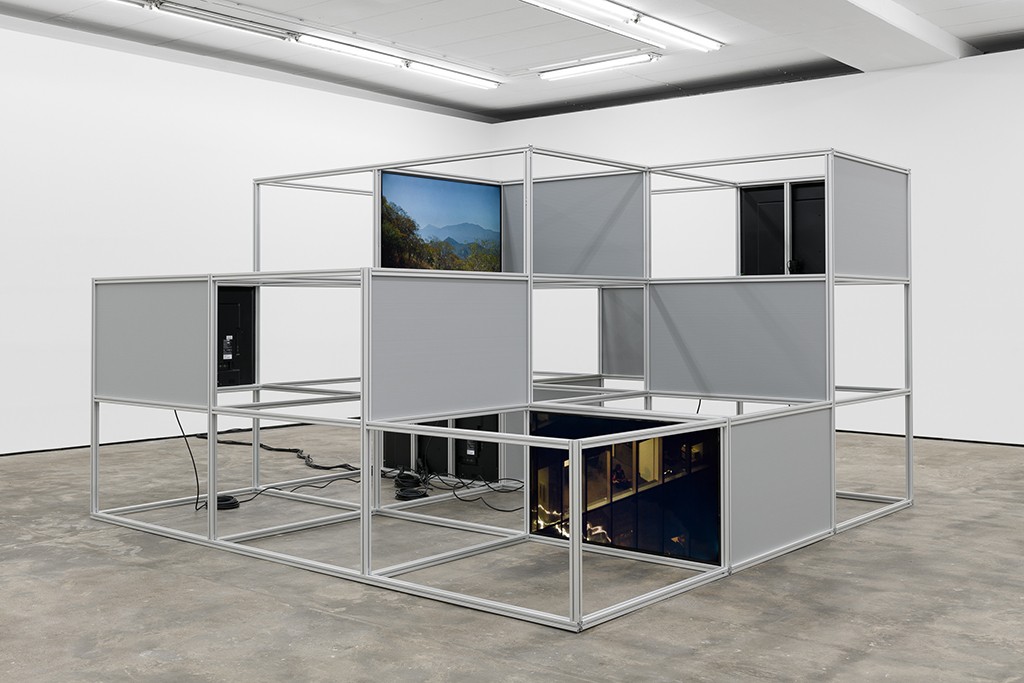 WENTRUP is pleased to present the first solo exhibition by Jesper Just at the gallery.
The exhibition derives its title Continuous Monuments from a series of designs created in 1969 by the legendary Italian architects’ collective Superstudio. In the 1960s as steel and concrete boxes began to overrun the cities, Superstudio saw a need to ridicule this spreading of homogeneous modernistic architecture. They proposed that enormous mega structures would stretch out over the earth, across metropolises and pristine natural landscapes, even into outer space. Referring to the idea of Superstudio Jesper Just created a site-specific installation made out of aluminum profiles to present a selection of video works.

The exhibited videos Continuous Monuments (2017), Servitudes #6 (2015), In the Shadow/of a Spectacle/is the View/of the Crowd (2015) and Llano (2012) all show a solitary woman in interaction with a building or a structure, and how she uses this in a different way, by treating it like a musical instrument. By using a mixture of multiple video channels, sound installation, sculptural and architectural interventions the works follow female characters in the realm urban space, exploring the body’s relationship to public and private space and the limits and boundaries of the body itself in a search for selfhood. How they define the limits between their bodies and their surroundings, both physically and internally.

An important feature of the exhibition is, what Jesper Just himself calls, ‘the idea of interconnecting elements of the films: space, sound and visuals’. The exhibition is designed in a way that the architectural interventions, the moving images and the soundtracks of the films are interconnected and thus interact with each other. Images and sounds merge into each other, so new combinations and new compositions are created. By assembling these elements, Just creates a compelling audio-visual experience, in which the visitor is almost physically absorbed. This makes it possible to have another perception of the works, a perception with which a stronger relationship is realized between the ‘poetic wanderings’ in the films and those of the observers. Music and resonance serves as structural elements and vessels for connection – linking the characters, films and the experience for the viewers like an invisible web. Here we have the connection with the ideas of Italian architects Superstudio. In the words of Jesper: ‘In a sense, it rearranges the power relations, it dismantles the hierarchy and tries to democratize and equalize things.’

In 2013, he represented Denmark at the Venice Biennale.