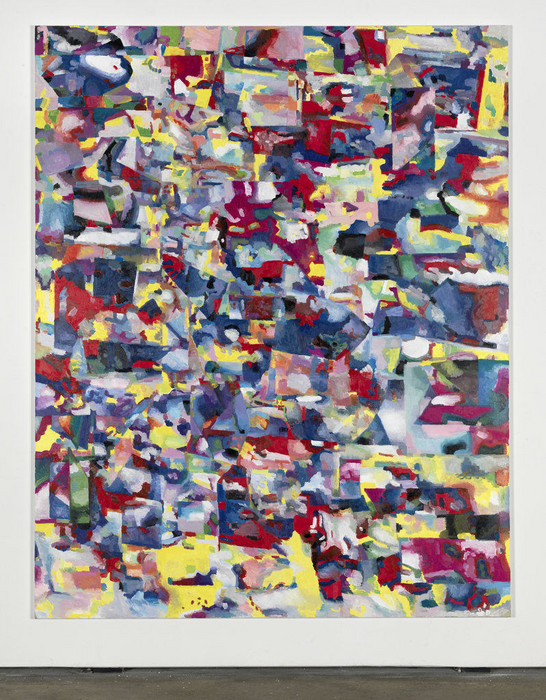 Michael Kalki’s painting, which has developed from the surreal-figurative through a quasi-abstract pointillist phase to apparent abstraction, has always been inspired by the psychology of memory. Kalki is particularly interested in the methods for storing, processing, and making accessible memories, and the potential of producing something new.
If we were to conceive of the computer, which processes information in a similar systematics, as an out-sourced memory, then the digitalization of impressions could be compared with their transformation of what humans see and think into painting. The disintegration of classical images into countless small brushstrokes familiar from the impressionists corresponds to the pixels of the computer; the virtual space, as a system of series of signs without a centre, beginning, or end is not dissimilar to a cubist painting that treats object and space as having equal value. Michael Kalki uses the computer as a design tool with whose image processing techniques he can test the relationship of planes and colours in order to approach his subjective reality. The handling of the pictorial elements, before they are brought to the canvas, is similar to the arrangement of a still life, only that here they are abstract connections, shifts, distortions that stand in a fleetingly complex interrelationship to one another. The simultaneity of processes is reflected in the poly-focality that results from two superimposed pictorial layers that supplement one another and which, through filters like colour shade and saturation, are put in a state of tension. The painting does not present the beholder with a defined view of a piece of a world, but rather with the sum of its power play that is taking shape. Nonetheless, Michael Kalki leads it through the transfer of the fleetingly abstract switch signals in the classic representational forms of painting back to its simplicity.
He thematizes the struggle for dominance: between the visible and invisible, conscious and unconscious, the formation of structures and hierarchies. Simultaneously, he has also cast, both in terms of colour and formally, a net of allusions that can be interpreted as subtle references to predecessors in art history.
www.wentrupgallery.com/home/