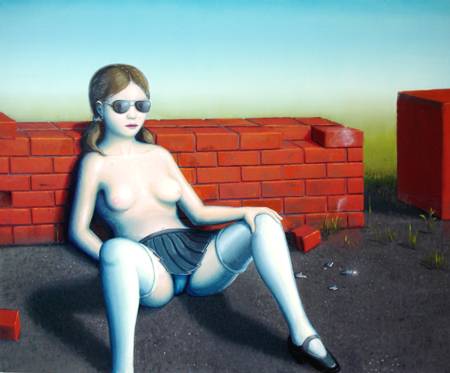 Beginning of January 6, 2005, Galerie Jan Wentrup will host an exhibition showing new painting of the English artist Michael Kirkham. Born in 1971 in Blackpool Michael Kirkham studied from 1991 - 1998 at Glasgow Scholl of Arts and at De Ateliers in Amsterdam.
Michael Kirkham had numerous single and group shows over the last years, and today he is represented in important private and public collections such as the Gemeentemuseum in Den Haag (NL) or the Museum voor Moderne Kunst in Arnheim (NL).
In 2006 the artist will be honored with a single show at the Gemeentemuseun in Den Haag.
"In a world in which film and television is ubiquitous, illusionist spaces present themselves predominantly as animated thus as narrative. Everything moves, or can start moving. Everything lives, or belongs to the domain of the living. Everything relates to everything, or can be related to something else. It is this implied interaction between human beings and objects that imposes a narrative coherence to almost any form of illusionist space.
It is especially in contrast with this "hysterically" animated world that the paintings of Michael Kirkham induce an uncanny experience. Again and again we question to what extent his illusionist spaces actually are animated. Are the figures we see represented in his paintings supposed to be human beings? Or are they puppets or automatons, comparable to the puppet Olympia in the famous story "The Sandman" by E.T.A. Hoffmann? Are the eyes of the figures supposed to see something, or are their gazes empty and their eyes of glass? It is precisely this ambiguity in Kirkham ́s work which makes us think of the work of the German artist Oskar Schlemmer or the English artist L.S. Lowry.
But our hesitance or uncertainty is not restricted to the ambiguity between alive and lifeless. In most of the paintings, the space in which the figures are situated is highly undefined. Although we see pieces of furniture such as a bed or a couch, it usually remains rather unclear wether we are confronted with an interior or an outside space. (...)
The ambiguity in Kirkham ́s work imply more than a lack of clarity or an arbitrary possibility of choice. They cause a feeling of discomfort, of anxiety, or even of threat. It is because of this "gloomy" effect that the expression "uncanny" is so adequate to describe the impression these works leave on the viewer. Sigmund Freud, in his profound analysis of the uncanny experience, mentions some situations which almost literally fit the paintings of Kirkham."
Ernst van Alphen, Leiden University