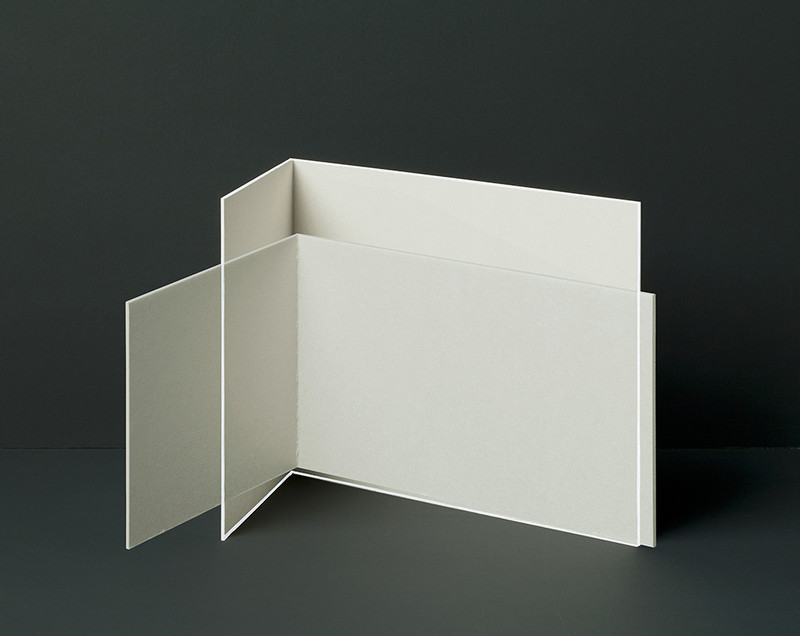 When is a photograph a photograph? Isn’t a sun-bleached patch of lawn actually also the result of a photographic process? When does a photo transpire? When a lens has opened and shut? Or at the moment an image first materializes in the developer? Possible ways of defining what a photo can be have become even more diverse since camera-produced digital images can be represented in binary codes and pixels. It looks like photography’s perennial crucial question: is that an analog or a digital image? is passé, outmoded at the very moment that “purely analog” or “definitely digital” ceased to say anything about the aesthetic quality of an image.

In her three new series Equally, Laying and Still, artist Miriam Böhm superbly demonstrates that the historic techniques of collage and montage can be equal partners with their digital heirs, cutting and pasting. These techniques do not represent opposites; instead, they have all become tools for a wide-range of artistic practice that produces images on photographic paper.

Images from the series Laying, for instance, depict reduced rectangular geometric forms in black and white on fabric resembling the underlay of vitrines or showcases. On one hand, we look at photographic images of a fabric on which forms appear as if on display. It is the tiny details — a minimal irregularity in the woven pattern of the fabric on the left side; or the surfaces of the white focal objects, finely lined as if drawn by brush hairs — that help them appear to us as “real” things. On the other hand: how do the forms come about – are they cutouts from colored cardboard or digitally arrayed set pieces? The answer is less interesting than the question: what makes them into apparently real things for us? The geometric forms in Böhm’s images also convey a powerful sense of being objects since they detach from the substrata and seemingly float like mobiles without, however, being connected to any detectable string or wire. Böhm does not resolve our highly productive doubts about whether the visible situation existed in actuality or not. What fascinates is how she designs and combines elements of the image in such a way that the old oppositions of figuration and abstraction, surface and depth, begin to flicker on the photographic paper – especially in light of a supposed referentiality.

In a likewise baffling manner, bright areas of paper are folded in front of a dark space in Böhm’s series Equally. Again it is the background that initially appears to be real, two dark panels of paperboard forming an angle. In front of this setting white sheets open out, the lines of their edges brighter as if drawn in chalk or paint; the sheets are semi-transparent and thus also afford a view of what is behind them. Even more, they literally interpenetrate, one level passes through the next. Böhm’s images consist of prints on photographic paper, and in this sense they are photographs. And it is a well-known fact that Miriam Böhm’s photographic working process also encompasses the preparation and construction of models, such as three-dimensional objects made of paper and paperboard.

For the first time, though, Böhm is also showing objects as independent works. On sheets of glass sit pieces of wood in skewed perspective. Presented on pedestals that elevate them to eye level, spaces “drawn” by wood and glass fan out in the gallery space before the eye of the beholder. However these are anything but vestiges of Böhm’s above-mentioned production processes; here they actually act as a counterpart to the productive confusions of surface and depth in objects that are familiar to us from her images.

Above all, the ON AT exhibition shows how Böhm interrogates the monolithic nature of the photographic image in her works. She disassembles in order to ultimately reassemble images that yield a coherent whole despite their multilayered and technically disparate components. But regardless of the manifold modes that generate her images or any theoretical underpinning, Böhm’s works are anything but difficult or inaccessible. Just the opposite: her images and objects are distinguished by a remarkable sense of composition within a reduced palette and therefore are perhaps not so much photographs in the sense of a referential recording technique as they are highly complex images that make use of an inspired repertoire of photographic techniques.

ON AT, Böhm’s exhibition at WENTRUP, runs in tandem with AT ON, her solo show at RATIO 3 in San Francisco, USA.

Miriam Böhm’s works were most recently shown as part of The Rudin Prize for Emerging Photographers at Norton Museum of Art, West Palm Beach, Florida. She had a solo show at the Contemporary Art Museum St. Louis, USA and she was part of the exhibition The Anxiety of Photography at Aspen Art Museum,Colorado, USA. Her works were exhibited in group shows at Berkeley Museum, Berkeley, USA, Kumu Art Museum Tallin, Estland and Kunstforum NRW in Düsseldorf, Germany.