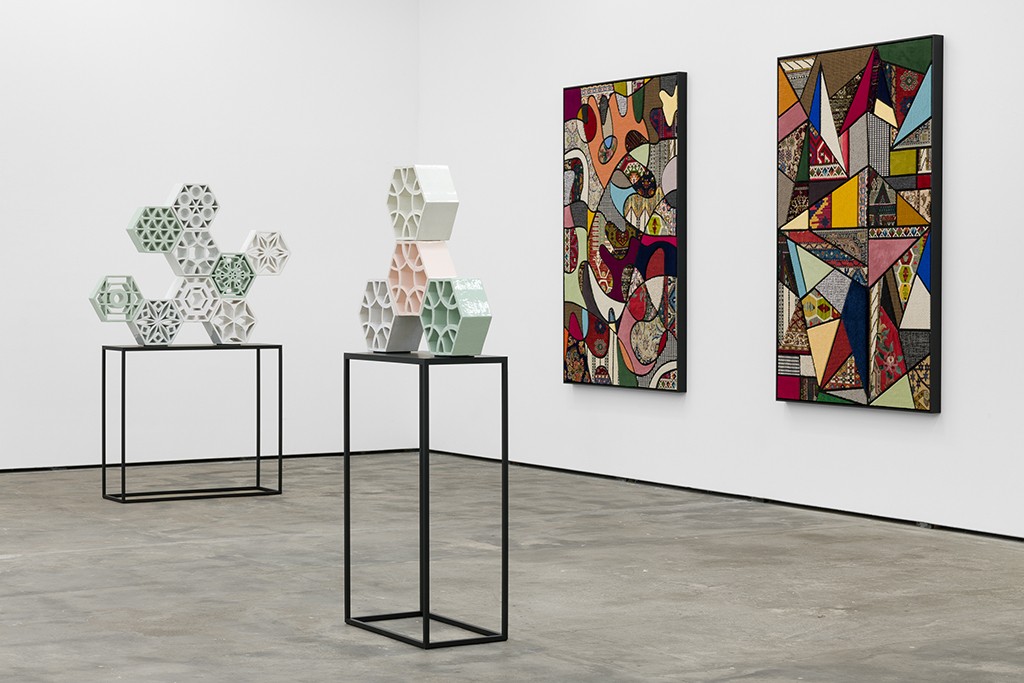 In her new works entitled Social Fabric, Nevin Aladag ‘constructs’ colourful composite landscapes from carpets of various formats and origins. There is an accidental – and therein even more striking – formal similarity with the Social Fabric series to a small canvas painted by Fernand Léger one hundred years ago. Dans L’Usine (At the Factory) shows flat blocks of monochrome fields in bright reds and blues. In the background, industrial metal pipes are still painted figuratively, whereas the foreground is already dominated by colour fields. Here, a line often delimits the colour fields, accentuating, offsetting, or inserting them – an example is the delicate narrow yellow line in the centre of the foreground offsetting the complementary saturated purple. Aladag, too, uses yellow to make a strong purple colour field ‘float’ within the composition. In Social Fabric, Aladag continues this progression from her earlier series Pattern Matching, but here she expands the palette of the carpets: in addition to carpets from the Maghreb, Iraq, or China, she now also uses carpets from Ireland, the USA, and Germany. Aladag combines the individual fields in such a free and unpredictable way (that they are formally not just reminiscent of Léger) – but perhaps question us to think of a virtual arrangement of digital fields. Kunstmuseum Wolfsburg argued quite fittingly in its exhibition “Art and textiles” that the Jacquard loom with its punch-card system is a “prototype of digital pictorial culture”, tempting us “to comprehend the World Wide Web as a kind of weaving loom of the Internet age”.

New sculptural works with titles like Jali Arrow, Jali Ring, or Jali Tree refer to the net or grid as a structuring element in Indian architecture. Jali was presented as an expansive installation at documenta 14 in Kassel. Delicate, openwork and geometric building elements allow to look out from inside, but do not let anyone gaze inside from the outside. Jalis often imitate forms in nature such as a branching-out treetop. The repetitive patterns also create infinite self-referential loops reflecting on themselves as abstract structures. In this way, they are related to a strategy that Aladaq was interested in in earlier works. In her Macramés, Aladaq revealed the physical structure of the medium itself and interrogated it with respect to its social and aesthetic potential.

By focusing on the historic cultural phenomenon that creates new forms of visibility, making concealment visible; the porous wall as a visible screen becomes itself a focus of attention. Spatial architecture alternates between plane and depth.

Aladag collected the models for her pastel-coloured ceramics of the Jali series in different places around the world. From these, she developed matrices ranging from European Art Deco to Arab architecture. Similar to her approach in Social Fabric, she combines these individual elements into a heterogeneous object that celebrates a potential of figuration and abstraction, planes and depths across geographical borders.