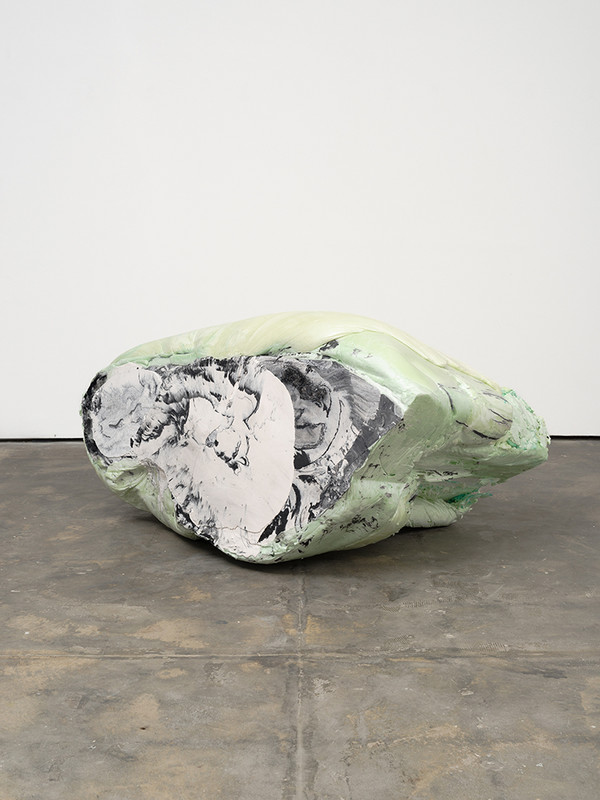 The source of Peles Empire’s artistic practice is connected with the provenance of its name in the Carpathian Mountains of Romania: Peles Castle. The eclectic building from the 1870s is distinguished by its uncommon concentration of the most disparate styles – each room imitates a different era in architectural history. Barbara Wolff (*1980) and Katharina Stöver (*1982) have worked together as Peles Empire for nine years – their photographic appropriations of this “edifice of copies” and their subsequent ongoing spatial interpretations of the source material constitute a central point of departure for their works. An important strategy used by Peles Empire is copying the copy; inherent as well is the process of translating something spatial into two-dimensionality, which ultimately again manifests itself in three-dimensional objects. Also significant is that although the original documentary image may sacrifice some of its figurative quality through the artists’ manual reproduction of particular parts of the image, it simultaneously gains spatial quality as an abstract object. Peles Empire shows the complex and – in the truest sense of the word – multilayered results of this method in their first solo exhibition at WENTRUP.

The exhibition title DUO first of all underscores the genuine connection between original and copy. The two concepts are interdependent and only attain their full meaning through the existence of the other. No copy without an original – needless to speak of originals if there were no copies. Peles Empire is interested precisely in the gap within this relationship, in the process itself, and particularly in the images and forms that the copying process gives rise to in the first place.

Their kinship with artists such as Gordon Matta-Clark, who used the deconstruction of architecture, the disassembling into fragments and uncovering of layers, as productive momentum, is apparent. At the same time, merely through the process of translation, Peles Empire is capable of creating something that Hito Steyerl has called “fractured and flexible temporalities” which, in contrast to Matta-Clark, are not conceived in terms of an ultimate form, but privilege the unfinished. All the more striking are the richly detailed structures that their objects display – possibly precisely because they are not created with finality in mind.

Peles Empire reproduces pictures of spaces in order to create new pictorial spaces from them. Their achievement in the translation lies not only in the transformations from two-dimensionality into spatiality and back, but also in how they are able to transport a real space into the digital realm and then retrieve it for the physical environment of the exhibition. In this context, they not only display the actual splinters and fissures of their sculptural process, but also make it possible to capture the aesthetic fracturings and foldings that are free to develop only within the gap between original and copy.

Their works have been recently shown in a solo exhibition at GAK Bremen, Germany and a group exhibition at The Moving Museum in Istanbul, Turkey. Previous solo exhibitions by Peles Empire in 2013 include Cell Project Space, London; Kunstmuseum Stuttgart, Germany; and GSS, Glasgow. They have also exhibited at Shanaynay, Paris, NKV Wiesbaden, Bundeskunsthalle Bonn, (all 2013), Temple Bar, Dublin; V22, London; and ‘Bold Tendencies’, London (all 2012). In 2011 they were selected for Frieze Projects at Frieze Art Fair, London. 2009 shows include ORTON.nl, Rotterdam. In 2007 they were invited by MAK Center for Art & Architecture at the Schindler House, Los Angeles to exhibit in ‘The Mystery of Life’, as part of their residency.
www.wentrupgallery.com/home/