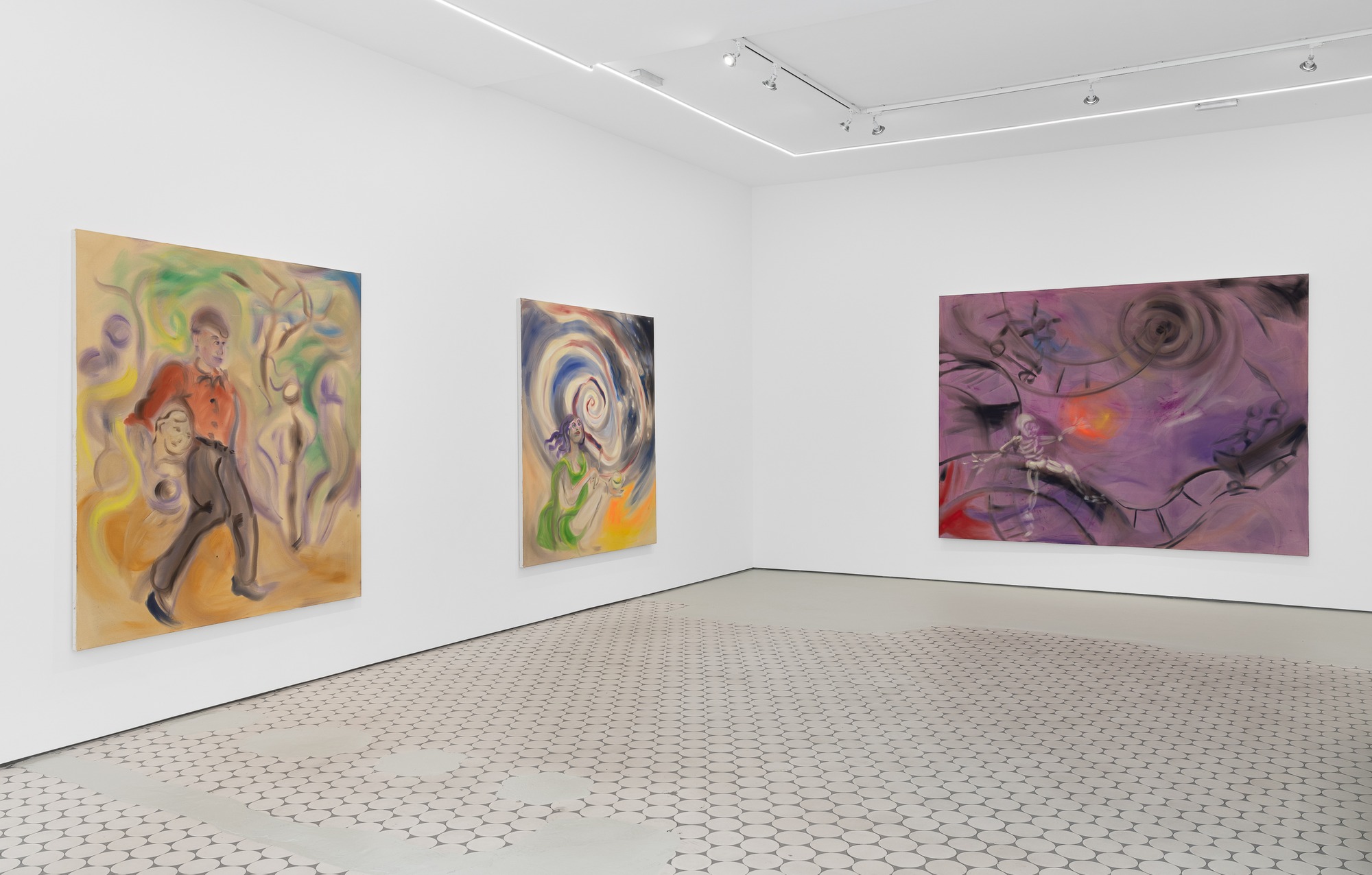 Sophie von Hellermann is currently exhibiting her paintings together with David Ostrowski and Andreas Schulze in the group exhibition 3 Zimmer, Küche, Bad at BRAUNSFELDER in Cologne.

Mostly, I’m excited about Sophie von Hellermann’s immediacy. She is full-on, she takes on her world. There is something severe about that type of transparency. This is true for her work even when I look back to its beginnings. It is her commitment to her own subjectivity as something like a gateway, something she can walk through and end up in a backyard fantasy or in the remoteness of current politics. This transportation device is never represented, it is the thing itself. There is no escape; there is no illusion. Barely any perspective.

She gets at this thing in a variety of ways: her theories of color, the rampage of her rapidness, her allegorical depictions and lakes of abstraction. That is why it is equally tempting and reductive to bring up historical references like expressionism or geometrical color field painting. Looking at her swirls and circles, I want to raise my hand and ask, but doesn’t this remind you? But who cares? Her work and mind, or the way that they blur, as a portal of sorts, wide enough to fit her friends and family and whoever else dares to join.

So her practice is as generous as it is uncompromising. Her resistance to letting things go is admirable. While I practice surrendering to the universe and its forces daily, Sophie won’t have it. I sometimes daydream that it is still possible for me. “It is what it is,” she writes, “isn’t that just the most annoying little phrase?” I pause and consider it: “Can’t argue with that!” “It is just driven by the desire to disqualify all critique and every initiative from the get-go. Suddenly everyone is saying it. I hate it!” Again, hard to argue with that.

I’ve recently heard someone talk about the loss of a loved one, coming to terms with their grief, they literally said it: “It was what it was.” I couldn’t argue with that either. I guess there is a difference between being resigned to the things that are out of one’s hands and learning to accept the things one cannot change. To see that difference is really hard for me. It is where I glimpse grace. If daily life is the battlefield of modernity, subjectivity is the grenade, and courage is the safety pin. For me, a daily coming to terms guides me on how to play along and where to genuinely resist. Never just out of principle, but necessarily based on experience.

Face to face with my own bleakness that is just a tiny shard mirroring the rest, I gently shift to hope from despair. But that was just today. Tomorrow will be both new and old, and that’s what it means to sit on that sword. I don’t think an artist has much power to change anything. But I can see how subjectivity is a weapon.

Remember, the most exciting aspect of the art of Sophie von Hellermann is its currentness. It reflects the immediacy of how an image is registered, how information is processed today. Validated and discarded. It is what drives her upbeat swirls and circles, her reflections of the state of things. Some deeply personal, others societal.

Repeatedly, she stresses the artistic-political urgency of contemporaneity. “In this current moment one has to remain calm and look for clarity,” she writes. But it is hard, it is tempting to be abrupt, unrestrained, and selfish. I guess it is a matter of self-will and how control is exercised. She uses painting as a memory machine. It’s like a time machine, but it isn’t a made-up thing. Instead of only thinking something, she paints it.