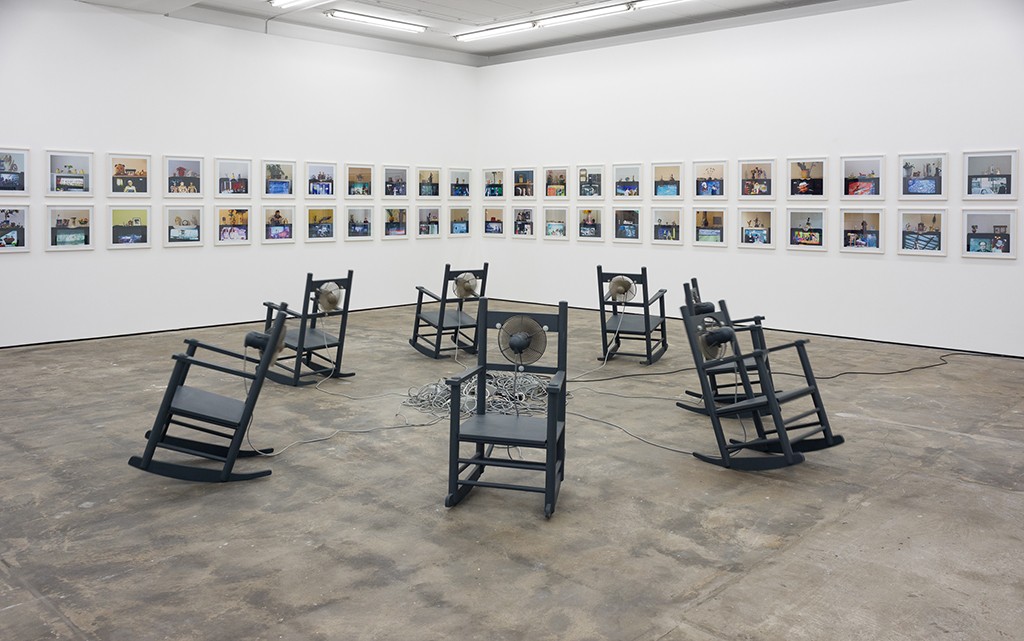 Timm Ulrichs’ fourth solo exhibition at WENTRUP comprises the eponymous photo series Die Welt im Wohnzimmer: Das Fernsehgerät als Sockel und Hausaltar (The World at Home. The TV as plinth and house altar), 2001/09 as well as seven kinetic rocking chairs, Außer Atem (Breathless), 1989/95/96 and a selection from the tableau series Versteinerte Himmel, (Petrified Sky), 1983/96/97. Ingeniously, Timm Ulrichs, the ‘total artist’ and pioneer of conceptual art, links subjects such as housing, apartments, interiors, furniture, and participation in media networks. Interventions in materials and functions lead to the shifts of aesthetic, historical, and social frames of reference of everyday objects and art works, for which Ulrichs is famous.

Die Welt im Wohnzimmer: Das Fernsehgerät als Sockel und Hausaltar shows photographs of apartment interiors in Slovenj Grade, a town in Slovenia. Ulrichs asked for access to private spaces as part of an exhibition in 2009. The resulting photographs always use the upper edge of the TV as the horizontal in the centre of the photograph. Displayed on the TVs are all sorts of objects, ranging from xerophytes and teddy bears dressed in leather to statues of the Virgin Mary. Under the central horizontal line, the radically truncated TV image is visible. From a sports cast to a news channel or a wildlife documentary –– at the moment the photographs were taken, all sorts of programmes were on, producing unexpected collisions of objects and images. The square format of the photographic prints alludes on the one hand to the early CRT monitors that were almost square. These were recently replaced by the ever-expanding horizontals of flat screens, and they are also in contrast to the extreme panel formats on pads and mobile telephones in recent years. On the other hand, formally speaking, Die Welt im Wohnzimmer with its square format is located between a portrait and a landscape. In this sense, Timm Ulrichs gives us a portrait of the apartments’ inhabitants, at the same time documenting a domestic media landscape. In his catalogue essay, Matthias Reichelt describes how three muscle-laden body builders on the screen become Atlases. Here, however, they don’t carry the earth on their backs, they shoulder a world of artificial flowers, porcelain elephants, or a photograph of a baby in a gilded frame. Die Welt im Wohnzimmer is also a socio-anthropological documentation of a soon-to-disappear “cultural practice of using CRT TVs as pedestals”, writes Reichelt. The TV set of the post-war era became a social site of assembly whose role had been previously fulfilled by the domestic hearth or fireplace. In 1969, Gerry Schum’s Fernsehgalerie [TV Gallery] showed a contribution by Jan Dibbets: on eight successive days, he replaced the TV programme for a few minutes and showed instead a fire in a fire place. The TV as a window to the world closed unexpectedly and brought the viewers back into their living rooms, where there was a cosy fire in a box. As a presentation surface for family photographs, kitschy souvenirs, and devotional objects, the TV replaced the piano or chest of draws, which in the bourgeois salon had hitherto been the preferred location where such objects were placed. Ulrich’s photographs are a monument to this practice, which has, thanks to the flat-screen TV, almost disappeared.

Außer Atem is presented at the centre of the exhibition space. It consists of a series of seven identical rocking chairs, presenting, as is so often the case with Ulrichs, a prototypical pure form. Their simple and clear formal vocabulary is reminiscent of North American Shaker chairs, which is where historically rocking chairs were first conceived. Built from hardwood in cooperation with a wood turner, these chairs were subjected to a decisive intervention. All have an axial fan build into the back; its case points towards the seat and thus causes the air to flow from the backs of the chairs. Timm Ulrichs anthropomorphises the chair that now rocks on its own accord. In his oeuvre, Ulrich frequently takes the chair from its passive role and gives it potential agency. The installation Außer Atem thus also references one of his best-known works: Der Sitzende Stuhl (nach langem Stehen sich zu Ruhe setzend) (The sitting chair. After a long standing resting) from 1970. Außer Atem also referencesthe history of kinetic art that required either a mechanical drive or used the natural elements such as wind to start moving. Timm Ulrichs’ rocking chairs Außer Atem combine both.

The exhibition Die Welt im Wohnzimmer closes with a symbolic look out of the window. Timm Ulrichs stages coloured slabs of marble and granite as Versteinerte Himmel. Marble from Finland can be green, Portuguese marble, like that from Italy, can take on a light red hue, whereas Greek and Macedonian marble, next to the well-known Carrara marble, develops a light grey or gleaming white. Ulrichs frames square slabs of different stone varieties, and in addition to the colours their veins contribute to creating the impression of clouds during different times of the day or year. The high-quality stone slabs were supposed to help him do landscape paintings without having to paint, Timm Ulrichs explains. He adds to the skies an interlocking paver familiar from public pavements. When the stones are not used flat as the edge of the pavements, but are placed upright, the cheap pavement stones become stone houses with a gabled roof, behind which stretches an infinite stony sky when we look out from the living room.

The first solo exhibition with works by Timm Ulrichs (born in 1850 in Berlin) took place in 1969 at Museum Haus Lange in Krefeld. In the same year, Ulrichs also participated in the exhibition Konzeption – Conception at Museum Morsbroich in Leverkusen, curated by Konrad Fischer, which made conceptual art known in Germany. Eight years later, Timm Ulrichs participated in documenta 6 in Kassel. Over the past 50 years, Timm Ulrichs had numerous national and international solo and group shows, in institutions such as Museum Folkwang, Essen, Städtische Galerie im Lenbachhaus, München, Haus der Kunst, München, Museum für Konkrete Kunst Ingolstadt, Kunsthalle Düsseldorf, ZKM Karlsruhe, Staatsgalerie Stuttgart oder der Kestnergesellschaft Hannover in Germany, as well as at the Stedelijk Museum in Amsterdam, Netherlands, the Centre Pompidou, Paris, France, and the Museum der Moderne in Salzburg, Austria. In celebration of his 70th birthday in 2010, Sprengel Museum and Kunstverein Hannover honoured him with a comprehensive retrospective.

In 2017, Timm Ulrichs will participate in the group show The Arcades: Contemporary Art and Walter Benjamin at the Jewish Museum, New York, and the Skulptur Triennale in Bingen.

Timm Ulrichs has received many national and international prizes and awards. His early performances and happenings are of great art historical significance.
www.wentrupgallery.com/home/