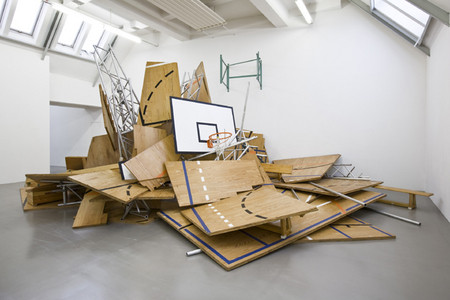 When there is talk of the connection between art and life, then Olaf Metzel's sculptures and installations derived directly from life, as well as his interventions impacting upon life itself, occupy a special place in the art landscape of Europe. Metal scaffoldings, guardrails, a burst-apart piece of gym equipment, rows of seats from a sports bleacher, bistro tables from snack bars, metal lockers, and other objects and materials utilized and sometimes forcefully altered by the artist seem to take quite literally the relationship between art and everyday life which has been repeatedly postulated by various avant-gardes. But Metzel is not concerned with a renewed "material aesthetic," and certainly not with a "poetry of the trivial" residing in and to be coaxed out of objects. Instead the sculptor, object artist and draftsman, who lives in Munich, aims at a direct encounter with the viewer and his social, urban and social-political environment.

Metzel's works make highly provocative allusions to the reality of life, which for him comprises more than just "everyday life." He is concerned with bringing to light socially conveyed interconnections and contradictions, with interpreting, analysing and critiquing them in an idiosyncratic manner. What this means concretely for his oeuvre can be read, for example, from the installation Noch Fragen? ("Any More Questions?") which provides the title for the exhibition. It consists of several baseball bats which are wedged into a tight bandaging made from military camouflage fabric. This work installed in the Weserburg establishes a connection to various phenomena of our political reality which have already been seen and sensed to be threatening, and it relates them to the museum architecture in a formally successful but highly contradictory manner. A similar impact is achieved by a slanting tower which is built out of bent tubes and panes of smoky glass. In combination with a modernist piece of seating furniture, this ensemble has an irritating title Hartz IV wird fünf ("Hartz IV turns five") which was inspired by a newspaper report. At a first glance, the no less provocative bronze sculpture Turkish Delight is reminiscent of a conventional female nude. But this naked woman is wearing a headscarf such as we are familiar with from the street scenes of our large cities, and of course also from the still-current "headscarf debate."

Metzel works according to the principle that production = provocation ("provocare" = "call forth"). Even though in his works he repeatedly utilizes, bends, estranges and destroys material with which we are familiar from public life, he is nonetheless concerned primarily with the symbolical sphere, with the meanings which objects have as signs circulating throughout society, with the discussion and investigation of the values which are connected with them.

The artist aims at a viewer who not only aesthetically enjoys the things which he sees in front of him, but who also enters mentally into the contradictions which they illustrate, comprehends them in their social context, and thereby literally allows himself to be provoked by them.
www.weserburg.de