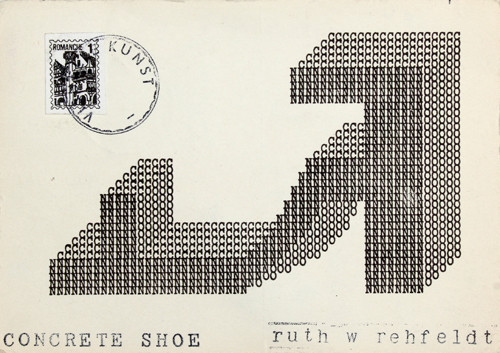 Ruth Wolf-Rehfeldt, born in 1932 in Wurzen, Saxony, is one of the few women artists from the former GDR to address in depth the relationship between text and image. Through their involvement in the Mail Art network, she and her husband Robert Rehfeldt were able to surmount the ban on exhibitions and publications by alternative artists during the GDR period. Her artistic activity came to an end with the unification of Germany in 1989. This is the first ever exhibition of her poetic and visual “Typewritings”.

In the early 1970s Ruth Wolf-Rehfeldt began to write poems, to draw and to produce collages. Her first typewriter works, which she entitled “Typewritings” and whose diversity defies description, were produced on an Erika typewriter. With impressive precision, she arranged letters and punctuation marks into pictorial elements, often creating a three-dimensional effect.

Each of her works consists of an original - either an individual typed work or a series - and of further reproductions in the form of carbon copies, postcards or prints in formats ranging from A5 to A2. These works can just as easily be situated within the context of conceptual art or visual and concrete poetry as they can in the domain of Mail Art. The humour and finesse of her work made Ruth Wolf-Rehfeldt a sought-after contact person in the network of international artistic exchanges.

The work of Ruth Wolf-Rehfeldt has long been represented in the collection of the Research Centre for Artists’ Publications. A few years ago the Berlin-based artist donated those of her works that remained in her possession – a considerable number – to the Research Centre.

The exhibition at the Research Centre for Artists’ Publications has been organized in cooperation with the “Poetry on the Road” literary festival. A comprehensive brochure in German and English will be published in August.
www.weserburg.de